Museum of the Southern Jewish Experience Announces May 27 Opening

The Museum of the Southern Jewish Experience is opening on May 27, though the celebration will wait until this fall as the Covid pandemic continues to fade.

“We are excited to announce an opening date after a pause as a result of the pandemic,” said Jay Tanenbaum, museum chair.

Located in the museum district of New Orleans, the museum explores over 300 years of Jewish history and involvement in the South, focusing on 13 states.

Multi-media exhibits will illustrate how Jewish immigrants and succeeding generations adapted to life in the South. The museum will also address issues of race and antisemitism, and the many ways that Southern Jews navigated them at different times. Understanding through education is a primary goal.

While May 27 is being billed as a “soft opening,” Executive Director Kenneth Hoffman said it really means “we’re open, there’s no ‘not open’.”

The mezuzah affixing ceremony and family celebration will be on Oct. 3, “in order to allow more people to travel to New Orleans to be with us, because we think it will be even better with people feeling comfortable traveling,” Hoffman said.

Details of the October events are yet to be confirmed. Hoffman said a group of hotel rooms will be announced, and the weekend will include “opportunities for doing Jewish tours of New Orleans, on the Sunday I can imagine music, food, lots of kvelling.” There will also be a special event for founding donors.

As the opening nears, Hoffman said “It’s a vision that a lot of people have been working very hard toward. It will be an exciting day for New Orleans and the Southern Jewish community, the museum community, and I hope everyone can come this summer, learn something and enjoy themselves.”

While Hoffman has been in his position for three years, “members of the board have been working on this for much longer,” Hoffman said.

The museum began at the Henry S. Jacobs Camp in Utica, Miss., in 1986 as small communities in the region closed or downsized their congregations, sending their memorabilia to the camp. Some of the ritual items, such as an ark, were used by the campers during the summer.

Jacobs Camp Director Macy Hart continued to grow the museum, which soon had its own building. Photographer Bill Aron doing a series of “Shalom Y’all” photography tours of the Jewish South. An “Alsace to America” exhibit was held in Jackson and then was permanently installed at the museum.

In 2000, the museum spun off into the Jackson-based Goldring/Woldenberg Institute of Southern Jewish Life, which provides an array of services to Jewish communities in 13 Southern states. After three decades of leading the camp, Hart became the founding executive director of the Institute, which had the museum under its umbrella.

By 2012, with the camp needing space and the museum being located in an area where it was difficult for tourists to access, the museum shut down temporarily and a new home was sought. The Institute, which had grown out of the museum, then spun off the museum as a separate entity, and New Orleans was announced as the museum’s new home. A $10 million campaign was launched in 2017 and is ongoing.

In 2019, the museum’s collection of artifacts was moved to New Orleans from Mississippi. Due to space, a small fraction of the items will be displayed at any particular time.

Some of Aron’s work will be in the new museum, and the first special exhibit will recall Aron’s original 1990s tours. “As we move forward in this new iteration of the museum we want to pay respect to what came before,” Hoffman said, adding that Aron and Vicki Reikes Fox, who also worked on the original exhibit, are helping curate the new exhibit.

Another link to the past came as Hoffman led Macy and Susan Hart on a tour of the new museum in late April. Hoffman, a Baton Rouge native who grew up at Jacobs Camp, said he has “very big shoes to fill” in leading the new museum.

He said the museum’s new incarnation isn’t just geographic, it has an expanded mission and expanded storytelling. “Outreach to non-Jews is a major preoccupation of the museum. This isn’t just for Jews, this is for everybody, we’re telling universal stories through a particular population, we want everyone to see something of themselves in the stories we are telling.”

Tanenbaum said “Jews in the South formed bonds of deep friendship and community-building with their non-Jewish neighbors. These stories show how people of different backgrounds come together to create the American experience. This can be a bridge to a better understanding and future for all of us.” 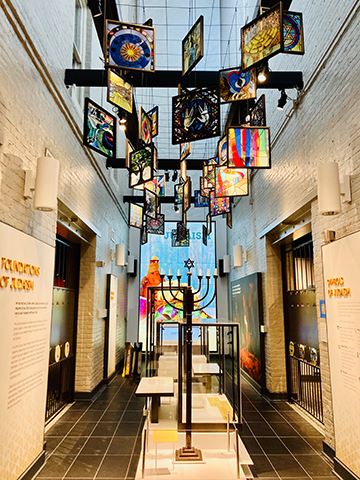 The museum’s exhibits were designed by Gallagher and Associates, which has also done exhibits for the National World War II Museum and the Sazerac House in New Orleans, the National Museum of American Jewish History in Philadelphia and the National Archives Museum in Washington.

Located on the St. Charles Avenue streetcar line, the museum is close to the National World War II Museum, Ogden Museum and the Contemporary Arts Center, and near the Oretha Castle Haley cultural district.

After entering through the storefront, visitors will view an introductory video. Exhibits begin with the small Jewish communities of the Colonial period, through the Revolutionary War and the first major wave of Jewish immigration in the decades leading up to the Civil War. Hoffman notes that the museum will not “shy away from uncomfortable history,” and topics such as Jewish involvement in slavery will be explored.

The first area will include how Jews so often became small-town merchants and, for the most part, integrated into Southern communities, including becoming mayors and other civic leaders.

The middle area, formerly an open-air atrium, contains exhibits about Judaism, including ritual items from around the region, life cycle events, holidays and texts. From the ceiling, there will be images of stained-glass windows from synagogues around the region.

The third section will explore 20th-century topics, from the spread of Jewish communities throughout the South, to how Southern Jews responded to the Holocaust and the establishment of Israel, to the civil rights era and the decline in smaller, rural communities in favor of larger cities.

For those who want to dive deeper into a particular community or state, video screens will be available with access to a wide range of historical resources, including items from the museum’s collection.

At the end, there is an interactive video quilting station, where visitors can explore their own stories.

Of course, there will also be a gift shop featuring regional art and Southern Jewish-themed items.

Tickets will be available on the museum’s website and will be for a particular day, but not a particular time. Walk-up tickets will also be available. Hoffman said that “depending on how busy we get, how popular we are, there may be some waits,” and if capacity is reached, the museum will put “the health and safety of our visitors, staff and volunteers above all else.”

The museum is following state mandates for capacity and CDC guidelines for preventing the spread of Covid.

The museum is open daily except for Tuesdays, from 10 a.m. to 5 p.m. The museum is also closed on New Year’s, Mardi Gras, Rosh Hashanah, Yom Kippur, Thanksgiving and Christmas. Admission is $15, $13 for seniors, students and active military, and $10 for ages 6 to 17. Children under 6 are free, as are museum members, and the membership plan will be announced soon. Group rates are available.