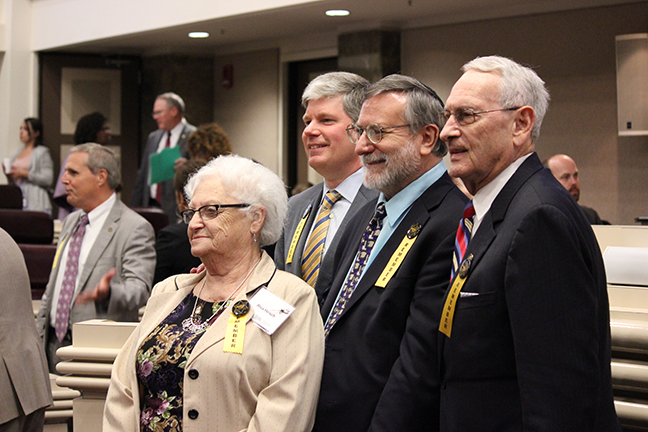 House Joint Resolution 160, along with HJR172 recognizing the annual state Holocaust commemoration that was held in April 11, was spearheaded by Rep. David Faulkner, who is a member of the Alabama Holocaust Commission. Co-sponsors included Reps. Jim Carns, Danny Garrett, Victor Gaston, Mac McCutcheon and Chris Pringle. After being introduced on March 30, it passed the House and Senate by voice vote and was enacted on April 27.

The Mobile Area Jewish Federation welcomed the resolution, saying it “will support MAJF’s continuing efforts to combat antisemitism and educate our local students about the Holocaust. Through our support of Mobile Jewish Film Festival’s Julien Marx Student Film Series and of partner organizations such as the Gulf Coast Center for Holocaust and Human Rights Education, we hope to provide support and resources for our local public school teachers and students to learn the lessons of the Holocaust and the far-reaching implications of hate and bigotry,” said Cassie Morgenstern, MAJF executive director.

CUFI founder and chairman Pastor John Hagee praised the measure. In a message that included a statement on the passage of CUFI-backed bills in Utah, Idaho and West Virginia countering anti-Israel boycotts, Hagee also noted “in Alabama, after close communications with a host of allied organizations and the Department of Education, we are now seeing that state endorse quality Holocaust education.”

It also mentioned the 2020 antisemitic vandalism in the state, and called for the state Department of Education to ensure “Alabama’s students have access to quality Holocaust education.”

The resolution calls for the forthcoming revised Alabama Course of Study social studies curriculum to include “components that ensure students learn the breadth of the history of anti-Semitism and the Holocaust, including the Third Reich dictatorship, concentration camp system, persecution of Jews and non-Jews, Jewish and non-Jewish resistance, and post-World War II trials,” and communicate “the impact of personal responsibility, civic engagement, and societal response in the context of the Holocaust.”