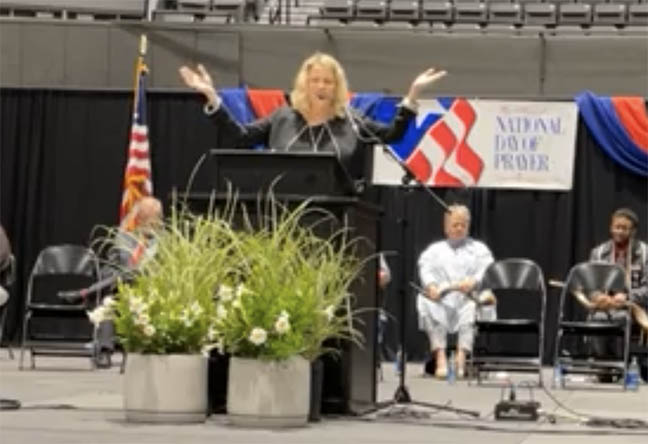 At the Mississippi National Day of Prayer event on May 6, the Secretary of State cited the approaching End Times in calling for more Christians to run for public office in the state, while an event organizer called for Jews to become Christians.

The event, held at the Mississippi Coliseum in Jackson, attracted a large number of state officials, including an address by Governor Tate Reeves.

According to Pray Mississippi, the event organizer, this is the 70th anniversary of Rev. Billy Graham’s call on the U.S. Capitol steps for a national day of prayer, which was then established by President Harry Truman, and designated as the first Thursday in May by President Ronald Reagan.

According to Pray Mississippi, the event is to pray for “the seven spheres of influence in our culture: Government, Church, Family, Business/Commerce, Education, Media/Arts & Entertainment, and Military.”

Pray Mississippi is “a state-wide movement of prayer and fasting unifying churches and hundreds of churches and tens of thousands of people strategically praying for every young person in the state of Mississippi.”

At the event, Secretary of State Michael Watson said “we need Christian men and women in office today more than ever before. And if you’re a believer, if you’re a member of the church, you understand the signs of the times right now,” adding “we see the end times.”

Patti Herrington, Pray Mississippi’s capitol coordinator, prayed for both the United States and for Israel, saying “we pray that Israel’s enemies are confused and scattered, oh God. We pray, oh God, that every force of darkness will be destroyed and rendered powerless, oh God. We decree and declare that the United States of America stands with the Apple of your eye, oh God, and Israel will never be shaken.”

She also prayed that God would stop world leaders from trying to divide the land of Israel.

Rabbi Joseph Rosen of Beth Israel, the only synagogue in Jackson, urged the governor, legislature and other state officials “to foster a more inclusive interfaith environment, and to show respect to the diverse faith community of Mississippi.”

He said Herrington’s “sentiments on converting Jews to Christianity were inappropriate. Rather than fostering an inclusive interfaith environment, the ‘National Day of Prayer’ allowed the invocation of a theology that attacked and alienated Jews.”

While evangelicals are the vast majority of participants, during the Trump administration there were also Jewish, Hindu and Muslim speakers at the national Rose Garden ceremonies.

President Joe Biden’s National Day of Prayer proclamation for this year mentioned the “many religious and belief systems” in America, and did not specifically mention God. “I invite the citizens of our Nation to give thanks, in accordance with their own faiths and consciences, for our many freedoms and blessings, and I join all people of faith in prayers for spiritual guidance, mercy, and protection,” he wrote.