A joint statement by agency leaders in New Orleans 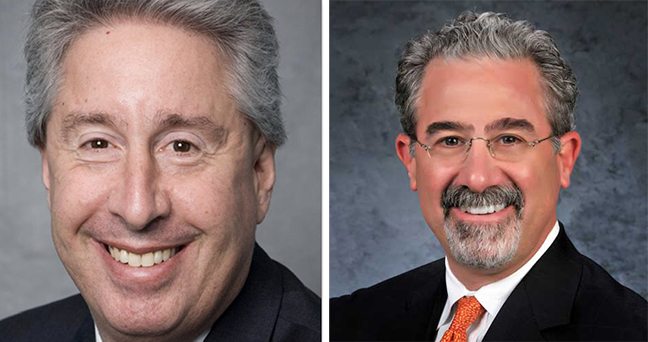 A joint statement by Arnie Fielkow, CEO of the Jewish Federation of Greater New Orleans, and Bobby Garon, executive director of the Jewish Endowment Foundation of Louisiana.

It has been a very difficult week for Israel and its citizenry, as well as those in the United States and around the globe who, like the two of us, are proud Zionists who love the Jewish State. Whether it be praying at the Western Wall, enjoying falafel on Dizengoff Street, bathing in the warm Mediterranean waters of Tel Aviv, watching with tears in our eyes 70,000 Jewish athletes and fans from around the world sing Hatikvah at the Maccabiah Opening Ceremonies, proudly taking account of all that our beloved Medinat Yisrael has accomplished in a mere 73 years in the areas of health care, high tech, and entrepreneurship, or just sipping coffee at one of the ubiquitous Israeli cafes, knowing that those around us are fellow Jews who decided they wanted to make Israel home and live amongst fellow Jews — we love Israel!

It is for such reason that, as leaders of the Jewish Endowment Foundation of Louisiana and Jewish Federation of Greater New Orleans, we awaken this pre-Shavuot morning with such concern over both the present and future of our beloved Jewish State. We always knew Israel lived in a dangerous neighborhood with countries who sought her destruction, yet the last week was perhaps a much-needed wake up call that we American Jews can, and should, never take Israel’s existence for granted. And, as such, we must do everything possible to support our Israeli brethren, be it politically, financially or in any other way needed so as to ensure our grandchildren and great-grandchildren, like us, can also one day behold Israel’s beauty and richness.

We were recently asked by a local media member what are the underlying causes for this week’s conflict and what are our feelings as local Jewish leaders. Our answer: do you want the simple or the complex? Simple, in that no country in the world should have to endure 2,300 rockets of destruction and death directed against its cities and citizenry. No country, no matter the extenuating circumstances, should have to have its citizens sleep in shelters while enemy forces lob rockets just a few kilometers away. There is no moral equivalency between a democratic ally that uses its weapons to defend its citizens and a globally-recognized terrorist organization that uses its citizens to defend its weapons. Period, end of story.

What would our U.S. government do if Mexico decided to bomb Tucson or Canada sent rockets over the border to Burlington? Just like Israel, our leadership would protect the citizenry and do everything possible to defend the country. As such, we stand in complete and unequivocal solidarity with Israel as, like all countries, she has the responsibility to protect its civilians and its borders against terrorism and security threats.

The Complex? What we’re seeing in Israel at this moment is the unfortunate gumbo of intersecting events of the past few weeks, including internal Palestinian politics involving the cancellation of Palestinian Authority elections, clashes in Jerusalem’s Old City between Jewish and Muslim residents, a decades-long eviction dispute in Jerusalem’s Sheikh Jarrah neighborhood which has spiraled out of control, the arrival at the same time of Ramadan, Jerusalem Day, and Al-Nakba (“The Catastrophe”), the uncertainty of who will lead the next Israeli government, and a very dangerous Iran which continues to fund and sponsor conflict all over the region through its proxies, Hezbollah in Lebanon and Syria, and Hamas and Palestinian Islamic Jihad in Gaza. While many in the Middle East cheered the recent Abraham Accords that brought Israel closer to many of its Arab neighbors, Iran actively promotes continued discord in an effort to retain its desired role as the great regional protector. Similarly, there can be little question that Hamas’ offensive this week was fueled by the perceived weakness of its long-time political rival, the Palestinian Authority, and that its rockets were intended to demonstrate to all Palestinians — be it in Gaza or the West Bank — that they are the strongest organization to lead them into the future.

Regrettably, Hamas’ actions have resulted in the death of over 150 (and counting) Palestinian and Israeli lives, many of them children. As Jews, we mourn the loss of every human life but truly wonder, as Golda Meir did decades ago, when will Palestinian mothers and fathers “love their children more than they hate us (Jews)”? When will Palestinian families no longer tolerate their autocratic leadership placing them in harm’s way as human shields, and prioritizing their own political ambitions at the expense of innocent women and children who, like Israeli families, only desire calm and peace? Hamas and its other affiliated terrorist organizations’ indiscriminate attacks on both Israeli Arab and Jewish populations are, and have always been, intended to terrorize innocent people for their own political purposes. It is truly shameful.

Hamas, Hezbollah, and other connected terror organizations continue to amass an arsenal of weapons and run misinformation and propaganda campaigns with the express goal of destroying the State of Israel. These are the facts:

It is more crucial than ever to work toward an outcome that will ensure an end to the violence, an assurance of Israel’s security, and a path towards Palestinian self-determination — one without terror. Even in the fog of this week’s violent conflict, we still hold genuine optimism for a two-state solution. We believe that is the answer for peace in the Middle East, aided by the regional partnerships formed over the last year. The demographics of the entire Middle East are rapidly changing, with younger people coming into leadership and power who are less influenced by the past and more interested in economic development and stability, jobs, and other ways to improve quality of life for themselves and those whom they lead. Isn’t it time for the next generation of courageous leaders — the Yitzkak Rabin and Anwar Sadats of previous years — to finally emerge on both the Palestinian and Israeli sides so that the mutual dreams of peaceful co-existence, with security for all, can finally be fulfilled?

In loving and supporting our beloved Jewish State, we also do not need to agree unilaterally with every Israeli government policy. Israel is the lone democracy in the region and, just like Americans, Israelis actively and freely exercise their democratic rights in challenging such issues as settlement expansion, religious egalitarianism, societal inequities amongst immigrant populations, and many other topics. As American Jews, we should applaud our Israeli brothers and sisters in doing so as we all collectively try to fulfill our Jewish values duty of Tikkun Olam (Repairing the World). In light of this, it has been heart-breaking this week to watch the violent clashes in some mixed-population Israeli cities pitting Israeli Arabs and Jews against each other and threatening the historic family friendships in place for decades where both Jewish and Arab Israelis sought a thriving, shared society.

As previously stated, we mourn the loss of all human life. We are saddened by every casualty.

Members of our own community have children, grandchildren, extended family, and friends in harm’s way at this very moment, and we join them in praying for their safety and well-being. Many New Orleans youth and young adults are only a few weeks away from traveling to Israel on long-anticipated trips with NFTY, Birthright, Masa and other organizations, and we pray for both their ability to travel and return home safely.

We join with those ever-yearning for a more peaceful, secure, and just future for Israelis and all living in the region. We wish all of you a Chag Sameach and a summer of good health as we all return to a bit of life’s normalcy.