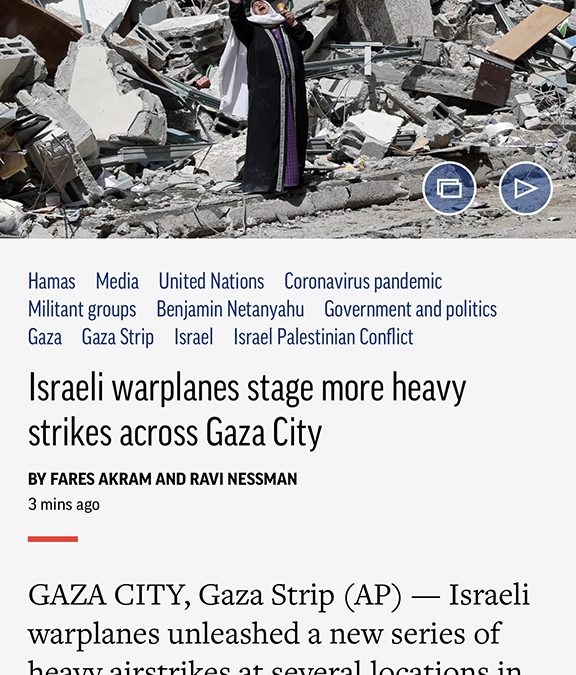 Despite protests over their Gaza office being destroyed, the Associated Press is still managing to get the news out

So figure this one out.

On May 15, after warning those inside to evacuate, Israel demolished a Gaza high-rise that housed Hamas military intelligence offices.

The building also housed the Associated Press and other media organizations. AP officials were infuriated.

AP’s CEO Gary Pruitt said, “The world will know less about what is happening in Gaza because of what happened today.”

Despite the fact that AP was notified one hour in advance that the building would be bombed, and there were no casualties, he added, “We narrowly avoided a terrible loss of life.”

This comment came from the Committee to Protect Journalists: “This latest attack on a building long known by Israel to house international media raises the specter that the Israel Defense Forces is deliberately targeting media facilities in order to disrupt coverage of the human suffering in Gaza.”

The reality, though, is that media organizations typically have contingency plans to continue coverage in case of disruption and AP stories continued to flow out of Gaza in the aftermath of the incident.

In essence, nothing was done to disrupt coverage of the human suffering in Gaza.

AP has asked for evidence from Israel that there were Hamas operatives and offices in the building.  Israel does not intend to share this information because it would jeopardize highly valuable confidential sources.

What’s interesting about AP’s request is that it had a large team of reporters in the building who likely knew that Hamas had a base of operations there. Or is AP’s Gaza team incapable, unwilling or afraid to find the proof themselves?

AP’s Pruitt ought to be asking himself and his organization, how did we miss this story, and if we were sharing a building with Hamas military intelligence how could we have not known this?

In an editorial on May 16 defending Israel’s actions in Gaza, the Wall Street Journal observed: “Israel’s government says the multistory building was also used by Hamas for intelligence purposes. AP says it had no knowledge of this, but this wasn’t the National Press Club in Washington, D.C. Using civilians and journalists as shields is a common Hamas tactic, and Hamas isn’t likely to have shared its plans with Western journalists.”

But in 2014, Matti Friedman (no relation), a former AP reporter in Jerusalem, wrote “The AP staff in Gaza City would witness a rocket launch right beside their office, endangering reporters and other civilians nearby—and the AP wouldn’t report it, not even in AP articles about Israeli claims that Hamas was launching rockets from residential areas. (This happened.) Hamas fighters would burst into the AP’s Gaza bureau and threaten the staff — and the AP wouldn’t report it. (This also happened.)”

He also said footage would be filmed of civilians being brought to Shifa Hospital in Gaza City, then Hamas officials would order cameras turned off when their wounded fighters were brought in, to feed a narrative that Israel was just killing civilians. Any reporter straying from the Hamas line would likely receive a “visit” from the group.

An article in the Columbia Journalism Review, based largely on AP’s response, disputed some of Friedman’s claims.

Nonetheless, the conflict continues, with Israel defending itself against Hamas and the other terrorist groups who persist in trying to kill as many Israeli civilians as possible, firing deadly rockets indiscriminately into their homes, commercial centers and public spaces.

AP is still in business, having experienced an unfortunate disruption that was not life-threatening. Meanwhile  Israeli citizens — because of Hamas embedding itself in civilian centers such as this one — are continuing to have their lives threatened.