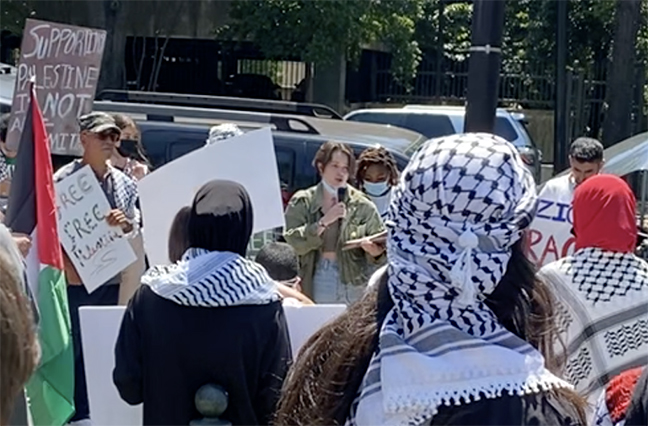 Hannah Vinsant speaks at the Birmingham rally on May 16

Accusations of Israel perpetrating white-supremacist ethnic cleansing and calls for Israel’s elimination were part of “Nakba 73: End Apartheid in Palestine,” a rally held on May 16 in downtown Birmingham.

Nakba is the Arabic term used by Palestinians to describe the establishment of Israel in 1948 as a “disaster.”

About 200 attended the rally outside Birmingham’s City Hall at Linn Park, which was followed by a march around the park. Originally scheduled for May 23, the May 16 rally was added at the last minute, and the following week’s rally is still scheduled as well.

The rally was part of a national effort by the ANSWER coalition to hold Stand with Palestine rallies across the country, with about 75 taking place coast to coast.

The North Alabama Peace Network also organized a rally in Huntsville, and the Workers Voice Socialist Movement held one in New Orleans outside the Federal Building.

The first 10 minutes of the half-hour rally was spent doing repeating chants, starting with “Free, free Palestine, killing children is a crime” and “from the river to the sea, Palestine will be free,” which is seen as a call for the elimination of Israel.

Other chants included “get your hands off Sheikh Jarrah,” the site of a real estate dispute in Jerusalem. The only allusion to the 2,500 Hamas rockets launched at Israel came with a chant of “resistance is justified when land is occupied,” led by a woman holding a sign that stated “Anti-Zionism does not equal antisemitism.”

In the Facebook event page, organizers reminded those attending to “please maintain that the sole message being received is the Palestinian cause, not hatred or aggression towards any group of people.”

To that end, there was a message to the Jewish community with the chants “Jewish people are our friends, but Zionism has to end,” in other words, stating that Jews do not have a right to national self-determination. A follow-up chant was “Zionism is a tool, it manipulates you into fools.” 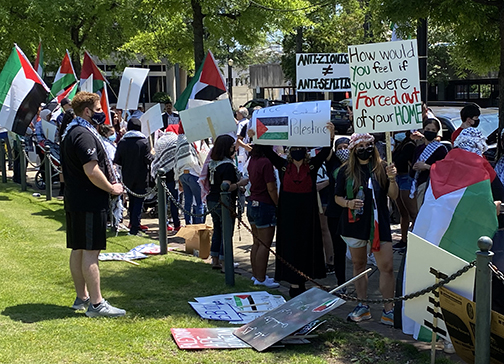 With one exception, the speakers did not identify themselves. The first speaker said the event was a “call for an end to ethnic cleansing and oppression,” and that “Palestinian liberation is liberation for all, our existence is resistance.”

Hannah Vinsant, an organizer with ANSWER Coalition, started her remarks by stating “I am also an American Jew, descended of a German Jewish family for which there are very few remaining legacies.” She quoted Marek Edelman, leader of the Warsaw Ghetto uprising, “to be a Jew means always being with the oppressed, never the oppressor.”

She said the term “Israeli-Palestinian conflict” is “grossly mis-named,” and that there were false narratives of “oppression on both sides” and it being “an issue of Jewish liberation and autonomy.”

After World War II and the absorption of refugees from Europe, “a mass exodus” of Arabs was seen as “the most desirable outcome,” Vinsant charged.

She said that today, “Palestinian Jews are also suppressed, beaten and murdered” and “our fellow black African Jews are deported and sterilized en masse in the false Jewish nation-state of Israel.”

Vinsant then added that “the only predication for the recognition of Jewish life is its ability to assimilate to the doctrine that would ultimately see us exterminated, which is white supremacy.” She called for the rejection of “the fallacy that seeks to convince us that the Jewish diaspora has less in common with our Palestinian counterparts than it does with the German Nazis, the American fascists or the European imperialists.”

She said Israel is “not a question of Jewish self-determination, this is a question of settler colonial exploitation, white supremacy, imperialism, proxy wars and genocide, which has effectively weaponized the status of one subjugated group to abet the eradication of another.”

Picking up on the oft-repeated assertion that opposing Zionism isn’t antisemitic, Vinsant said “to criticize the colonial atrocities of Israel, this is anti-Zionism, not antisemitism. To reduce the Jewish identity to the genocidal project of Israel at the dismissal of the thousand-year humanist project of Jewish history for which many have fought and died, this is antisemitism.”

She then said the $3.8 billion in U.S. aid to Israel should have gone to fighting the pandemic “that claimed almost 600,000 American lives.”

She said the situation in Gaza is “an international proletariat issue” and is part of a “global consolidation of genocidal imperialism and colonialism rooted in white supremacy.”

Vinsant, who grew up in Vestavia, was a participant in a May 2017 Birthright Israel trip with a group from the University of Alabama.

Further Reading: Flashpoint: What is the true story of Sheikh Jarrah?

She added, “the world can no longer be silent about the ethnic cleansing and genocide committed by Israel in Palestine.”

Another speaker said he has an uncle with a property in Sheikh Jarrah that is under dispute, and that there are really a couple dozen properties being targeted but Israel figures focusing on four at a time will soften the blow. He alleged that at night, Israel brings tankers filled with sewer water to spray the houses in an effort to get the Palestinians to leave.

Palestinian flags were plentiful at the rally, along with keffiyehs and scarves showing the entire outline of the land, from the river to the sea. Chanting the series of slogans, the crowd then marched around the perimeter of Linn Park.