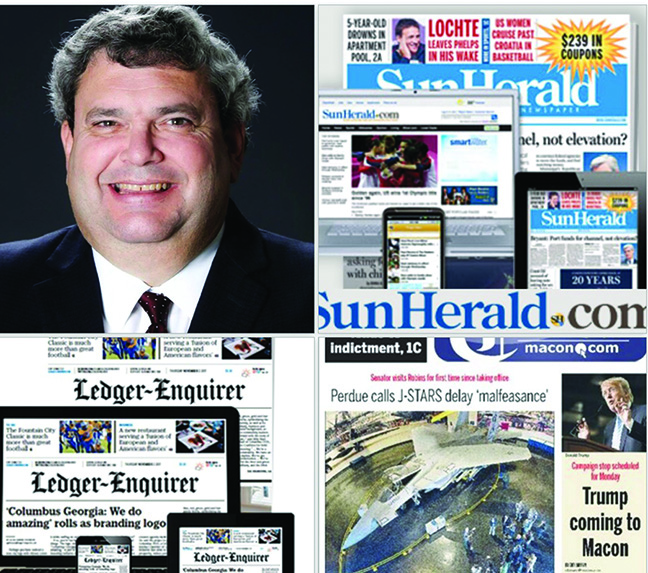 Every journalist knows the news business gets in your blood.

Blake Kaplan discovered this truth more than 30 years ago.

His passion for holding government accountable, coupled with covering the drama in the lives of the famous and lesser-known, has coursed through his veins for decades.

Like every good journalist, he’s driven by stories that matter; those that affect peoples’ lives.

Kaplan is executive editor of not one but three Southern newspapers: the Sun Herald in Biloxi, the Ledger-Enquirer in Columbus, Ga., and The Telegraph in Macon, Ga. All three are owned by the McClatchy Co.

It’s an usual position to be in, but it’s both a sign of the times and a reflection of Kaplan’s accomplishments and pursuit of journalism challenges.

Kaplan was promoted from city editor to executive editor of the Sun Herald in 2015. A year and a half ago, he was asked to take on the two Georgia papers as part of staffing changes at McClatchy.

“It is a challenge for sure. I’m based in Biloxi but we have good senior editors at each location. They run the day-to-day operations, and consult with me daily.”

Kaplan’s journey has taken him from majoring in journalism at Louisiana State University; to his days as a hustling, scrappy young reporter for several papers; to a rise through the ranks, including being part of a Pulitzer-prize winning team in 2006 for the Sun Herald’s coverage of Hurricane Katrina; to the helm of three daily newspapers.

Kaplan, 55, was raised in the Jewish community of Shreveport. He became a bar mitzvah and was confirmed at B’nai Zion and attended Henry S. Jacobs Camp in Utica for 12 years. Today, he, his wife and 10-year-old son live in Gautier, near Pascagoula.

Just from a Zoom chat with Kaplan you see the traits that make up a good editor. He’s warm but to the point, passionate yet professional, humble and self-confident at the same time, an attentive listener, and his newsman’s heart never stops beating.

Whether it’s talking about the success his three papers have achieved when many other newspapers are struggling; his vision of what makes a good mix of news day to day, or the satisfaction he finds in mentoring young reporters, he loves what he does.

“It’s not a nine to five job. Every day is different and every day is exciting,” says Kaplan.

All three newspapers follow the same formula for both online and print: A diverse mix of local, regional and national stories, attractively presented in a user-friendly format.

Their sweet spot is local stories in each community. That’s what Kaplan’s papers do that others can’t. That kind of coverage draws digital readers from around the world thanks to a heavy emphasis on search traffic from Google and social media traffic from Facebook and Twitter.

“We have been pretty successful in Biloxi,” Kaplan says with pride. “I like to think we are considered one of the better smaller papers in the chain. We have seen a decline in print readership at all three papers, that is an industry trend. But more people are reading and interacting with us online.”

All three of his papers get about 1 million unique visitors a month, which often translates to multiple millions of page views. A page view is when someone comes to a paper’s website and clicks a link.

Just as the news business has transitioned, so has Kaplan as his career has evolved. A turning point for many journalists comes when they move from being a reporter out in the field to being an editor behind the desk.

Not everyone wants that, but many do — with this Louisiana native being one of them. He, like others who’ve made the transition, recognizes that though his byline appears less frequently, he now has multiple bylines.

“A good leader looks out for the development of the people he works with — mentoring and helping people go to the next level. This is what I’ve focused on since becoming an executive editor; this is what I find the most satisfying,” says Kaplan.

“When I was a reporter, I took pleasure in seeing my name. Now the pleasure comes from seeing others succeed and rise to be the best journalists they can be.”