After 34 years, Ned Goldberg retiring as head of JCRS 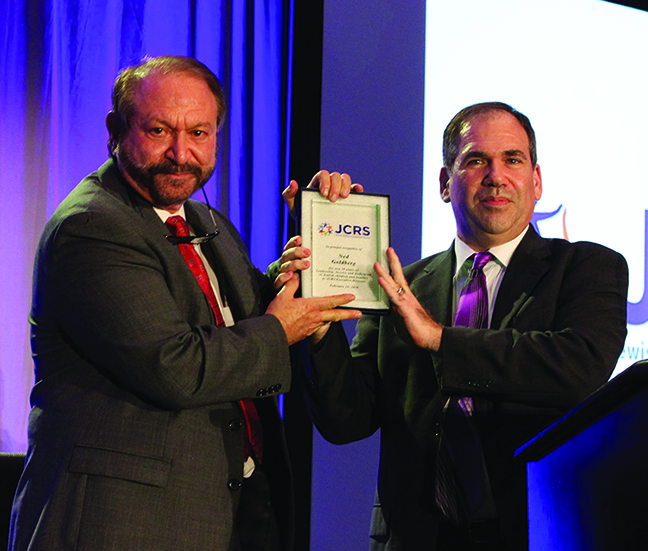 In 2018, Ned Goldberg was honored at the JCRS annual Jewish Roots gala for his then-30 years of service to the agency.

The Jewish Children’s Regional Service, which serves Jewish families and youth in a seven-state region, announced on June 7 that Ned Goldberg will be retiring as the agency’s longtime executive director in early 2022.

Goldberg has led the agency since 1988, when he relocated from South Florida and the Jewish Family Service field, to New Orleans, where JCRS has been headquartered since 1855. The JCRS board is now launching a search for his successor.

JCRS was founded as a home for Jewish widows and orphans, and when the home closed in the 1940s, it evolved into a regional agency that now funds or serves over 1800 Jewish youth each year in Alabama, Mississippi, Tennessee, Arkansas, Louisiana, Texas and Oklahoma.

A licensed social worker by training, Goldberg has worn many hats over the years, as JCRS has enlarged its existing programs for Jewish youth, while also initiating and incorporating new ones, which fit into the organization’s goals of assisting Jewish youth to become well-adjusted, successful and self-supporting Jewish adults.

When Goldberg moved to New Orleans in 1988, he was single, but upon his arrival, he met the woman he was soon to marry, Wendy Diamond, an employee of the New Orleans Jewish Community Center.   Wendy Goldberg is currently the New Orleans JCC’s associate director, and in 2022, she will have 40 years of tenure with the Center.

Under Goldberg’s leadership, JCRS has continued to nurture and expand its existing programs of financial aid to Jewish families in need of help for a special needs child, or seeking funding for undergraduate college education or camp scholarship aid. While traditionally, many of the families served by JCRS had limited income due to single-parent or immigrant status, or health-related issues, more recently, many new client families have qualified for financial aid due to natural disasters or economic downturns.

In 2008, after JCRS had already begun a number of its own outreach programs, it began administering the nationally heralded PJ Library Program in parts of the seven Southern states that it serves, and with the support of the Goldring Family Foundation, it currently oversees over 1,200 PJ book subscriptions a year for Jewish children and youth.

Goldberg credits his own tenure and the ongoing growth and success of JCRS as being a combination of a “number of factors.”

“First of all, you have incredible dedication from the JCRS board, staff, volunteers and donors,” he explained.  “When you have them behind you, you can respond quickly to emergencies, as JCRS did during hurricanes and floods that have repeatedly hit East Texas and Louisiana over the last five years.”

Last fall, as Hurricane Laura pounded Lake Charles and surrounding areas, the current JCRS president, Michael Goldman, was on the phone calling all of  his former neighbors and fellow congregants in Southwest Louisiana, and checking on their personal safety and property damage. During the floods that hit Baton Rouge in 2016, it was Goldberg’s staff on the phones, checking on the status and safety of all the PJ Library and scholarship recipient families that were spread out across South-Central Louisiana. In each case, the agency had department store gift cards to distribute to Jewish families within a couple days of the crisis.

Goldberg additionally listed the warmth and generosity of communities outside Louisiana, as an additional “resource” to the organization and “benefit” to the job.  In August 2005, as Hurricane Katrina bore down on New Orleans, Goldberg heard from a number of JCRS board members and supporters from cities in the region, offering shelter for both his family and the JCRS offices. Ultimately, Goldberg, his wife, Wendy, and their two children, Jodie and Adam, spent the next nine months living in Houston, and operating their agencies, while their children attended Houston Jewish day schools. Before returning to Greater New Orleans to live, the Goldberg’s were hosted and treated graciously by numerous Houston families and new friends.

Operating a social service agency that exclusively serves Jewish families and children, while concurrently having a family of his own, brought Goldberg perspectives that he might not otherwise see, or experience.  “Once back in New Orleans after Katrina, my children seemed to have numerous friends who not only were from single-parent families, but these children and teens were also being raised primarily or exclusively by the fathers,“ Goldberg noted. Thus began the idea for a Jewish fathers’ lunch-time support group, sponsored by JCRS and led by Goldberg, that over a course of about six years, had involved 25 single Jewish men from Greater New Orleans. About a quarter of the men were the exclusive caregivers of their children.  “At the time, I called around the country to similar Jewish family agencies and nobody had support groups for single Jewish fathers,” Goldberg added.

Giving up the role of being a full-time executive for an agency after 34 years will admittedly be very hard for Goldberg. “What other job is there where you can see the benefits of your work every day from current clients, and receive a phone call, email, or letter of gratitude from a past aid recipient every week?”  he concluded.  “Such wonderful services, hardworking and talented staff, and dedicated and generous board and volunteers are the reasons JCRS endures, and explains why I have tried to stay a few years beyond a typical retirement age. Who wouldn’t miss that experience?”