The Palestinian “Battle Flag” rapidly becoming like the Confederate one 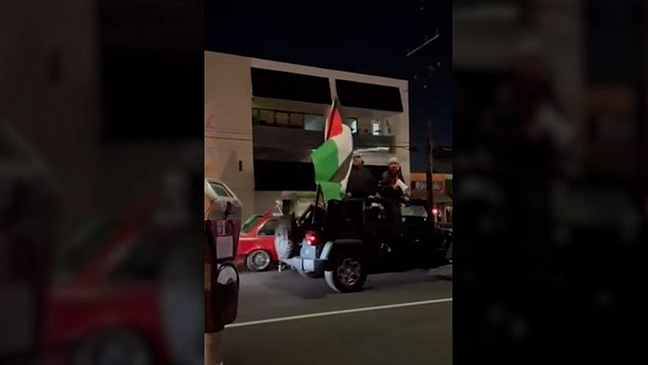 Pro-Palestinians confront Jewish patrons at a restaurant in Los Angeles as the conflict between Israel and Hamas in Gaza rages on, May 2021. Source: Screenshot.

(JNS) — By now, everyone has seen video footage or read articles about angry, young thugs in New York City searching for Jews to beat up or attack with fireworks. We’ve seen the cars in Los Angeles chasing an Orthodox Jew from a synagogue, screaming “Allahu Akbar” (“God is great”) and the convoy of cars targeting diners at an outdoor restaurant, demanding to know “Who’s Jewish?” before selecting victims.

Just as PLO chief Yasser Arafat turned the black-and-white-checkered keffiyeh into a symbol of terrorism, today’s Palestinian nationalists have turned the flag that represents their aspirations into a battle flag as contemptible as the Confederate flag.

Most of the media has ignored the confluence of Palestinian flags and violence, a nonchalance that can only be explained by hostility to Israel. The reaction would be very different if in May 2021 Jews were being attacked by people waving Confederate flags. So what, then, makes the Palestinian battle flag any different from the Confederate battle flag?

Surprisingly, they share some common traits, starting with the fact that neither flag represents a real country. Just because 11 states in 1861 declared that they were no longer part of the United States of America doesn’t mean that their “Confederate States of America” was a real country any more than last summer’s Capitol Hill Autonomous Zone (CHAZ) in Seattle was really autonomous. The Confederate flag represents a fake country, a blip in history (albeit a bloody one), a dream, a fantasy.

Likewise, the Palestinian flag represents a country that does not exist. It never has existed outside of U.N. Resolution 181, which the Arabs who hadn’t yet taken to calling themselves “Palestinians” rejected in 1947, along with every subsequent opportunity for a state of Palestine that didn’t include elimination of the state of Israel.

When most people think of the Confederate flag, they envision the one first used as the Battle Flag of the Army of Tennessee, but the official flag of the fake country was the so-called “Stainless Banner.” It featured a small, square Southern Cross juxtaposed against a white field to symbolize what one Georgia newspaper editor called “the Heaven-ordained supremacy of the white man over the inferior or colored race.”

After Lee’s surrender at Appomattox, the Confederate flag was adopted by extremists. Both the illegal KKK and the legal Dixiecrat Party used it, not to symbolize their Southern pride, but rather their white pride. It has become, as the Anti-Defamation League puts it, “a symbol of hate and white supremacy.”

Defenders of the Confederate flag must practice a studied ignorance of slavery, Jim Crow and anti-black racism in favor of a nostalgic admiration for antebellum Southern culture and its defense against the “War of Northern Aggression.” Mostly by popular acclaim, what was once to some a symbol of Southern pride has become irredeemably stigmatized as an indefensible symbol of hate, almost equivalent to the swastika.

The Palestinian flag was also born of a revolution. Designed by Sharif Hussein as the flag of the Arab Revolt in 1916, it has colors that represent the dominant Arab dynasties. It became the flag of the Arab National movement in 1917, predating the invention of the “Palestinian” identity, which came sometime between 1920 (according to Daniel Pipes) and 1977 (according to the PLO’s head of military operations, Zuheir Muhsein). Either way, the flag became the symbol of anti-Israel militancy in 1964 when the PLO appropriated it.

After the last few weeks, defending the Palestinian flag requires a studied ignorance of Jew-hatred, Arab supremacism and half a century of terrorist attacks in favor of a nostalgic admiration for “historic Palestine” and its defense against a “colonial invader.”

It also requires one to overlook the fact that Palestinian nationalism is entirely predicated upon the annihilation of Israel. The “P” in PLO, after all, stands not for “Palestinian,” but for “Palestine,” demonstrating that the PLO cares far less about “liberating” the Palestinian people than about destroying Israel.

Anyone who defends the Palestinian flag by differentiating it from the Hamas flag should watch the latest appearance by Hamas co-founder Mahmoud Al-Zahar on Al Jazeera TV where he announces that “this land is not suitable for a two-state solution … Palestine is an Arab and Islamic land.” Behind him, framing the map of an Israel-free “Palestine,” are the Hamas and Palestinian flags.

It’s not only Hamas that has taken to waving the Palestinian flag, however. Iran, too, now unfurls it at anti-Israel rallies. When Islamic Revolutionary Guard Corps commander Hossein Salami went on Iranian television recently to recite some baloney about how Israel had “surrendered to the sheer volume of missiles” fired from Gaza, he also had a Palestinian flag behind him, next to the Iranian flag.

After a century of rejecting any Jewish state, Palestinian nationalism has become synonymous with Israel’s erasure. Today’s Palestinian nationalists are indistinguishable from Hamas Islamists. The flag-wavers who beat up Jewish diners in Los Angeles on May 18, shouted “free Palestine” and “death to Jews” with equal alacrity.

The Palestinian and Confederate flags might seem like political opposites (left and right, respectively) but both are totems of Jew-hatred. No one suspects that a left-winger tied a Confederate flag to the door of the Museum of Jewish Heritage in January this year, or that a right-winger tied a Palestinian flag to the door of a Jewish Center at Harvard University in May, but everyone knows that both vandals were anti-Semites.

Sometimes, hatred of Jews is enough to unite the far-right and far-left. One such union was apparent on May 12, when a van painted with Nazi slogans (“Hitler Was Right” and “The Holocaust Never Happened”) and flying the Palestinian flag targeted a pro-Israel demonstration in Boca Raton, Florida. The men inside the van shouting anti-Semitic insults and advocating for a “free Palestine” through megaphones were wearing S.S. shirts.

These left-right anti-Semitic convergences lend credence to the often casually dismissed (especially by leftists) “horseshoe theory,” positing that the political continuum is not a straight line but rather a curve, with the far-left and the far-right of the spectrum nearly meeting like the terminal points of a horseshoe.

What else could explain the existence of the Confederate and Palestinian double-flag lapel pin? Sold by Promex GmbH Werbeartikel und Werbemittel in Konstanz, Germany, these particular Freundschaftspins are advertised as “symbols of solidarity with a powerful message!”

Confederate flags are no longer sold on eBay or Amazon, but thousands of merchants sell Palestinian flags. The people of Europe have certainly had no trouble finding them to display at their recent anti-Israel demonstrations.

In the last few weeks, the streets of Europe’s great cities have erupted in unabashed, almost carnivalesque, Jew-hatred. In London, hundreds of cars bearing the Palestinian flag paraded through the streets, blaring over their P.A. systems: “F**k the Jews and rape their daughters.”

In Brussels, the flag-wavers shouted, “Jews, remember Khaybar, the army of Muhammad is returning,” a reference to a seventh-century slaughter of Jews by Muslims, and in Amsterdam, they chanted Hamas’s song: “From the river to the sea, Palestine will be free.” In Berlin, Israeli flags were burned by people waving Palestinian flags.

“The anti-Jewish mob has returned,” as JNS columnist Ben Cohen put it. He’s right, and its standard is the Palestinian flag.

Southern states began in earnest removing Confederate symbols from public display after photos of the neo-Nazi white supremacist Dylan Roof posing with the Confederate flag became public. Through the shame associated with the murderer who chose his victims solely because they were black (especially compared to the dignity and grace of his victims’ family members who forgave him), the Confederate flag gradually disappeared from public display, and the Southern Cross disappeared from state flags.

Mississippi was the last state to remove it in January of this year. Flying, waving or wearing the Confederate flag in 2021 signals in-your-face, defiant racism.

How many more attacks on Jews by violent men waving the red, white, green and black will it take before the Palestinian flag becomes stigmatized as a symbol of hatred every bit as virulent as the Confederate flag?

Clearly, we’re not there yet. The media resists evidence that the Palestinian flag has become a symbol of hatred, and anyone who disagrees is attacked. That’s what happened when the headmaster of the Allerton Grange School in Leeds, England, observed two weeks ago that some of his pupils felt threatened by the Palestinian flag.

After he asserted that the flag was “a message of support of anti-Semitism,” the British media descended upon him, and he was soon forced to apologize. He shouldn’t have.

It’s time for the world to see the Palestinian flag the way Palestinians see it — as the symbol of a Judenfrei country called “Palestine” that can only exist if Israel ceases to exist.

A.J. Caschetta is a Ginsberg-Milstein fellow at the Middle East Forum and a principal lecturer at the Rochester Institute of Technology.