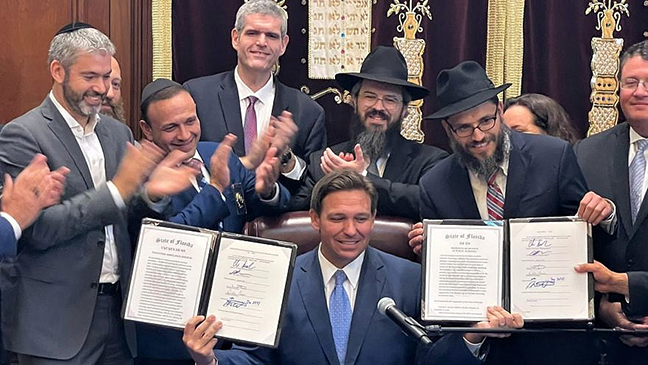 (JNS) — Florida Gov. Ron DeSantis visited a synagogue in South Florida on June 14 to sign legislation that had the support of many in the Jewish community there.

At the Shul of Bal Harbour in Surfside, Fla., a Chabad-Lubavitch synagogue north of Miami, DeSantis ensured that faith-based, volunteer first-responder services, like the Orthodox-run Hatzalah ambulance corp., can operate more fully, including using lights and sirens in an emergency if they meet specific criteria and have been operating for more than 10 years.

According to Rabbi Moshe Matz, executive director of Agudath Israel of South Florida, “Hatzalah of South Florida has been operating for 13 years as emergency responders but without permission to have emergency lights and sirens, as well as not being able to transport a patient if necessary. This limited Hatzalah’s ability to give the best possible service to the community. With this bill, Hatzalah will be able to shorten their response time even more, better their operations and save more lives.”

In speaking with JNS, he noted that the Orthodox community has been growing tremendously in South Florida in recent years and that this will really change the “level of care” they can receive from Hatzalah.

State Rep. Mike Caruso, who helped spearhead the legislation, said in a statement, “Hatzalah serves Jewish communities with religious sensitivities. Many of their community members follow strict Jewish guidelines, only speak Yiddish or Hebrew, and some are Holocaust survivors whose religious beliefs mean that their preference is to be transported and treated by a member of their community, someone they know.”

DeSantis also signed into law a “Moment of Silence” to encourage children in public schools to reflect at the beginning of the day — a suggestion made by the Lubavitcher Rebbe, Rabbi Menachem M. Schneerson, in the early 1980s. It was sponsored in the state House by Rep. Randy Fine (R-Palm Bay) and in the state Senate by Sen. Dennis Baxley (R-Ocala), and passed with bipartisan support, and welcomed by Chabad leaders in Florida.

Meanwhile, the state budget has included the allocation of $4 million to Jewish day schools for security funding, dollars that can be used for the first time to pay for professional security; $1.35 million for the Florida Holocaust Museum in St. Petersburg, which was vandalized two weeks ago; $400,000 for the Holocaust Memorial in Miami Beach; and more.

“Every family in our state should be able to send their children to school and know that they will be protected from harm, and be able to practice their faith,” said DeSantis in a statement. “I will continue to make sure that in Florida we root out anti-Semitism, and that every day we show our support for Israel and our Jewish communities.”