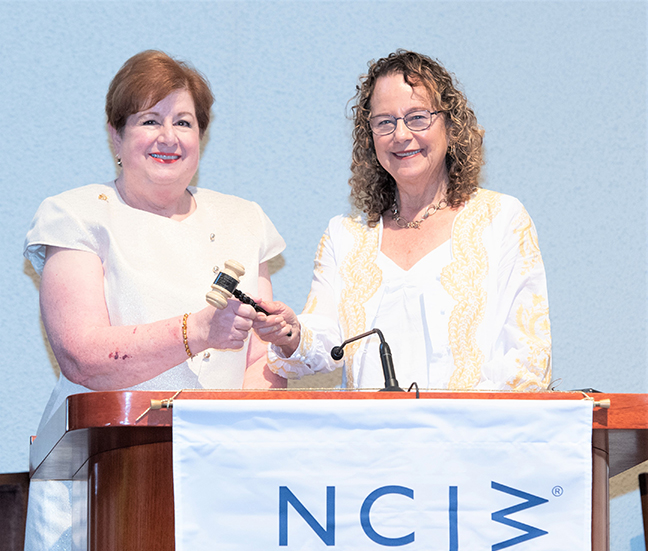 Passing the Gavel: Susan Hess is succeeded by Gail Pesses

Though this past year has been nowhere near normal, Susan Hess, outgoing president of the National Council of Jewish Women’s Greater New Orleans Section, said that they had such strong momentum that they were able to soldier on no matter what they encountered.

On May 23, the Section had its closing event and installation reception at Gates of Prayer, with about 100 in attendance in person and on Zoom.

“We have a very cohesive Section, which is growing,” Hess said. “We have a strong cadre of capable and willing volunteer leaders who are eager to do our work, be it public service, advocacy, fundraising, staging educational events and a whole lot more. We are the perfect example of what a successful women’s volunteer organization should be.”

Building on the momentum, the evening also included an announcement that the Section will be celebrating its 125th anniversary, and planning will begin this month for a celebration to be held on April 9, 2022, chaired by Loel Samuel and Jody Braunig.

“In anticipation of this anniversary, I would like to increase our volunteer, ‘boots on the ground’ opportunities,” said incoming President Gail Pesses. “We learn so much more about the needs of our community and make such a big difference when we show up in person.”

In her first remarks as president, Pesses said “Although I have been involved with many non-profit organizations, including secular, professional and Jewish, NCJW is the one I return to again and again. Throughout our long history, both the national NCJW and the greater New Orleans Area continue to remain vibrant and relevant by redefining the issues we advocate for and the programs we offer to our membership. I hope to continue doing this.”

Another of her goals “is to introduce programs and services that will appeal to and meet the needs of our younger and working members, such as a parenting study group and volunteer opportunities that are one day only while still providing thought-provoking and informative programs for all ages.”

There was also a ceremony presenting Dana Shepard and Kathy Shepard with the President’s Award. This unique award is given to individuals that have gone above the call of duty and who are invaluable assets to the Section.

Ina Davis, Alysse Fuchs and Jenny Nathan Simoneaux have completed their terms as elected board members and were thanked for their service.