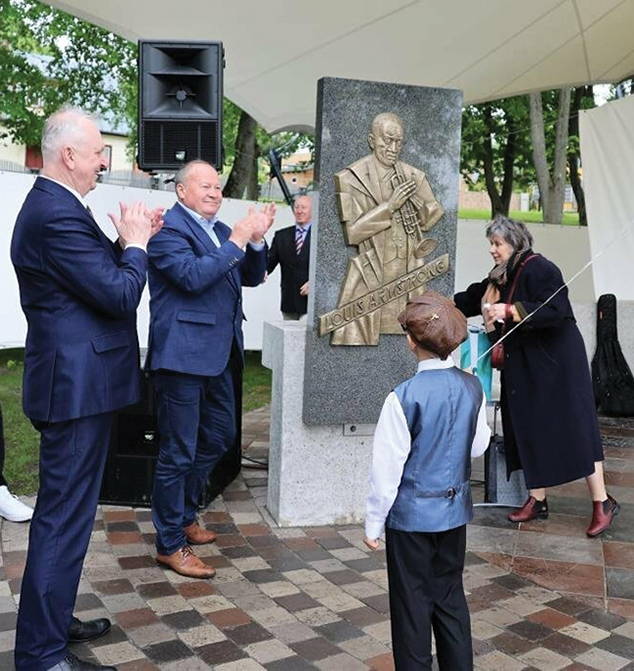 The story of the Karnofsky family in New Orleans and their early support of legendary jazz singer Louis Armstrong is now being celebrated in Lithuania.

On May 22, the municipality of Vilkija dedicated an outdoor stage overlooking the Nemunas Valley in honor of Armstrong and the Karnofskys, as the Karnofsky family had lived there in the 19th century before immigrating to the United States and arriving in New Orleans in 1900.

When he was six, Louis and Tillie Karnofsky hired Armstrong, who lived with his mother in a rough, impoverished neighborhood, to work with their sons, Morris and Alex, on their junk and coal wagons. They blew tin horns to attract customers, and Armstrong soon wondered how he would sound with a real horn.

He saw a cornet in a pawn shop window for $5, and was determined to get it. Armstrong insisted that it not be a gift but that he would work for it, so the Karnofskys loaned him against future pay, and he got the cornet.

Morris, who eventually opened the first jazz record store in New Orleans, knew Armstrong had talent and encouraged him to play. Dining with the family, Armstrong developed a taste for Jewish food, and learned a Russian lullaby from Tillie.

He worked for the Karnofskys for a few years, and then was off to the world of music. But he always had a special relationship with the Karnofskys and an affinity for the Jewish people. In one instance, before a Moscow concert he was asked by Soviet officials to remove songs with Jewish-styled melodies, because as they said, there were few Jews in the Soviet Union. Arm-strong is said to have replied, “And a lot of blacks?”

Armstrong wore a Star of David necklace, spoke Yiddish and had a mezuzah. He said that as a boy, he was astounded at the amount of prejudice “other whites” had toward Jews. 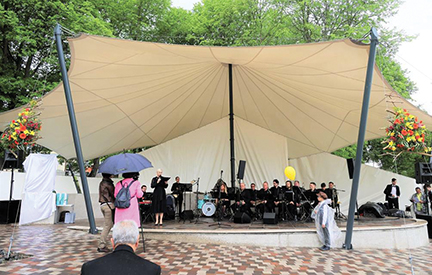 Eugenius Bunka, a journalist in Lithuania, has written about the connection between the Karnofsky family and Vilkija. During his research he contacted Jacob Karno and traveled to New Orleans to interview him about his family. He also visited with Ricky Riccardi, research director at the Armstrong House Museum in New York.

Bunka, who told the story at the annual Mama Jazz festival in Vilnius, suggested the dedication for the town’s long-planned venue. There is even a rumor, which has not been confirmed, that the stage is on the site where the Karnofsky house had been.

Local official Kazys Bacenas said “the stage is mainly dedicated to music events, so can there be a better idea than to call it the name of the music performer and his patrons from Vilkija? Nice coincidence.”

The stage will be covered by a canopy during the summer, with it being removed in winter.

Throughout the park, there are pillars where one can press a button and listen to one of 13 tracks by Armstrong.

An “Early Years” plaque describes the Karnofskys as “simple people” when they lived in Vilkija, who were involved in trading and waste collection.

After describing how the Karnofskys took Armstrong under their wing, the plaque describes the “warm relationship” between them, and how he incorporated Jewish motifs in his jazz. The plaque also mentions how the Karnofsky Project still helps “children from indigent families purchase musical instruments.”

At the dedication, the Kaunas Big Band played jazz and Kaunas District Mayor Valeriius Makunas spoke about the town’s history.

A bas relief of Armstrong was unveiled during the ceremony.

The Jewish History of Vilkija

The Jewish presence in Vilkija dates back to the 18th century, and became a large presence. In 1915, according to the book “Lithuanian Jewish Communities,” Jews were expelled from the town, but soon returned, and by 1921 about 800 Jews lived there, 80 percent of the population.

A large fire in 1937 contributed to the community’s decline, as did a disruption in the timber industry from Vilna, and by the late 1930s, the Jewish community numbered about 400.

In the Holocaust, Jews throughout Lithuania were slaughtered during the second half of 1941, often by Partisan groups before the Germans had even arrived. The first targets were Jews who were suspected to have ties to the Soviet Union, which had just left after occupying Lithuania.

After the German invasion, it took only a few weeks for the Jews to be rounded up and placed into ghettos, then taken to the forests to dig pits for their own mass graves, where they were either shot or buried alive.

A recent book, “The Lithuanian Slaughter of Its Jews,” compiled by David Sandler, includes a chapter on Vilkija, from the testimonies of Moyshe Karnovsky, recorded in a displaced persons camp between 1946 and 1948.

There had been two synagogues, including a 19th-century Neo-Renaissance style building on the bank of the river, and was the iconic image on postcards from that time. It operated until World War II, and afterwards was a storage house before being abandoned and collapsing. Some fortifications remain as the only remnants of the town’s Jewish history.