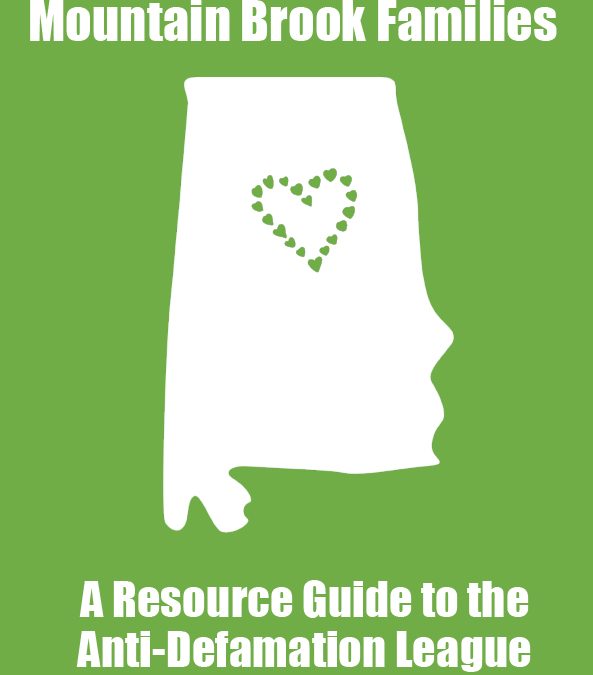 After a protest by numerous parents, fueled by an email campaign, the Mountain Brook School Board stated that it will “disassociate” from the Anti-Defamation League and not use its No Place for Hate program in city schools.

The push from an unidentified group throws into question a year-long process by which the school system was working to address issues of diversity and understanding. The process was sparked by an online video involving students and swastikas, and continued under the backdrop of the summer 2020 racial tensions across the country.

On June 14, an overflow crowd attended the scheduled Board of Education meeting to press their concerns about “MBS’ ongoing relationship with ADL,” leading to the board’s announcement.

A call for action 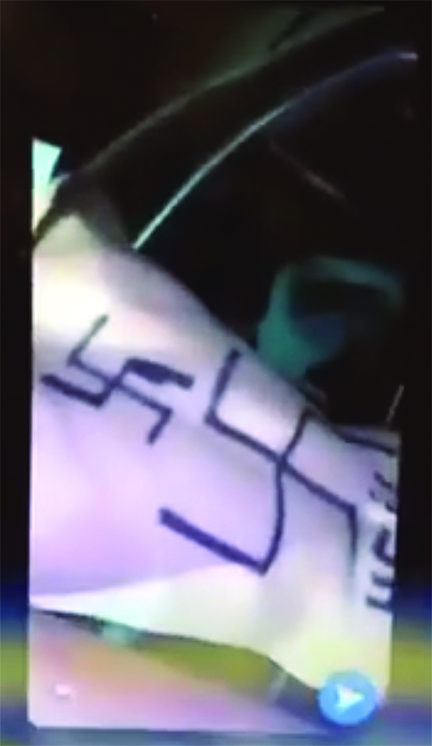 Footage from the video was posted to a Mountain Brook Facebook group by Caroline Gill, who was disgusted by it. Gill was a former Mountain Brook student who last year was the only Jewish student at Pelham High School.

The school system issued a statement saying it “condemns all hateful ideologies and actions,” and was “investigating the incident and determining the legal parameters for actions occurring outside of school.”

The Birmingham Jewish Federation reached out to the school system, with Federation CEO Danny Cohn expressing the hope that the system would adopt No Place for Hate and that the community would examine why students felt actions like those in the video were appropriate.

On June 8, 2020, a 17-member Diversity Committee was formed to address antisemitic incidents, along with the backdrop of “recent injustices experienced by communities of color.” Crestline Elementary School Principal Christy Christian and Al Cohn co-facilitate the committee.

According to a statement from the school system, the committee was also inspired by the system’s 2017 strategic plan, which included the goal of developing “structures to ensure that the school district honors diversity and that all who are associated with the school district are treated with respect.”

Outside the schools, community efforts to promote diversity were bolstered by the establishment of MB Listens, an independent “grassroots organization that is striving to ensure that everyone is accepted, welcomed, and treated equally in Mountain Brook.”

Mountain Brook is the richest town in Alabama, and is over 97 percent white. The Birmingham suburb has by far the largest Jewish community in the state, as when families started moving “over the mountain” into the suburbs in the 1950s, there was an “unwritten understanding” that Jews moved to Mountain Brook but “did not” move to neighboring Vestavia. Even in Mountain Brook, at first there were some neighborhood developments to where Jews were urged not to move, and Jews were not members of the Birmingham or Mountain Brook Country Clubs until recently.

After Gill posted the video clip, many Jewish students and alumni recalled swastikas and slurs at school that were brushed under the rug, to overt Christian missionizing in the schools and by fellow students, going back over the decades.

Participants in a recent MB Listens online forum on growing up Jewish in Mountain Brook were mainly positive about their experiences, but those types of stories also came up in comments.

In December, the Diversity Committee presented five recommendations to the school system, including diversity programming committees at each school, define hate speech and symbols in the school code of conduct and make them actionable offenses, develop communication about diversity opportunities to the broader community, develop partnerships with local and national organizations to be resources for training and support, and develop authentic experiences for positive interactions with more diverse communities.

Cohn said a subcommittee of the Diversity Committee was tasked with looking at program options, and the ADL’s No Place for Hate was “a really great framework for what we needed,” because of its flexibility. The framework wasn’t about a particular agenda but to “have a student body with a little more consciousness of the world around us.”

No Place for Hate is in over 1,600 schools nationally, with 200 in the Southeast. Since 2014, every school in the Huntsville system has been part of the initiative.

Allison Padilla-Goodman, Southern division vice president for ADL, said No Place for Hate “is a flexible educational framework that gives schools the ability to choose how they will address issues of bullying and bias in their schools, and provides opportunities for school communities to be celebrated for this important work.”

There is no requirement to teach any particular topic, “rather it encourages schools to have increased dialogue around diversity and bullying” based on the needs of the local school.

“In schools where deeply troubling incidents of antisemitism or other forms of discrimination have occurred — like in Mountain Brook and Hoover among others — No Place for Hate can be an important tool for leadership to build trust within their student body, support students in understanding the intolerable nature of hate, and helping the community understand how best to respond to these incidents when they happen,” she added.

The Mountain Brook system also contracted with ADL to provide 14 90-minute “A World of Difference” training sessions for faculty and staff, from February to August, for a total cost of $3,750.

The committee was moving along “until this most recent school board meeting where these families organized to object to any affiliation with the ADL,” Cohn said, catching the committee by surprise.

According to a 12-page “Mountain Brook Families… Resource Guide to the Anti-Defamation League,” families in Mountain Brook learned on June 12 that No Place for Hate was going to be implemented in Mountain Brook schools this fall. According to the booklet, by the next day “hundreds of parents” had researched ADL and No Place for Hate “and signed a survey to voice their concerns about MBS’s affiliation with the controversial Anti-Defamation League.”

That email survey cited a May 26 Village Living article that detailed the board’s implementation of diversity recommendations, saying “a concerned coalition of parents do not want Mountain Brook to align and/or affiliate with the ADL, due to controversial issues that surround this organization,” and said the committee should “seek alternative programs, frameworks, and curriculum for our children.”

The email gave an option to “voice my concern” by typing in a name, and then choosing whether to remain anonymous in what is presented to the school board.

The email linked to a backgrounder on the ADL, on the website for “Influence Watch,” a project of the Capital Research Center in Washington, which calls itself “America’s Investigative Think Tank” and promotes “individual liberty, a free market economy and limited constitutional government.” They examine the expenditures of non-profits, exposing “how those organizations are ‘captured’ by interest groups and used to undermine Americans’ freedoms.”

In its listing for the ADL, it notes that since former Obama administration official Jonathan Greenblatt took over as national director in 2015, it has been “sharply criticized for acting more as a left-leaning pressure group than a non-partisan anti-Semitism watchdog,” stating that ADL focuses on antisemitism by political conservatives while not just ignoring antisemitism among left-wing groups such as Black Lives Matter, but actively seeking to ally with those groups.

Conversely, in 2018 ADL was supposed to be part of a national anti-bias training for Starbucks employees, but was dropped after left-wing groups protested that ADL was hostile to people of color because of criticism of Nation of Islam leader Louis Farrakhan, was “pro-cop,” refused to endorse Black Lives Matter because of leaders’ anti-Israel positions, and in the words of Anti Police-Terror Project co-founder Cat Brooks, “You can’t be a piece of an anti-bias training when you openly support a racist, oppressive and brutal colonization of Palestine.”

The ADL called the 12-page guide a “misguided, deceptive piece of literature… that mischaracterizes ADL’s work and programs, and attempts to insert politics into children’s education.”

The flyer takes ADL’s definition of racism as “The marginalization and/or oppression of people of color based on a socially constructed racial hierarchy that privileges white people” and “translates” it to mean “only white people can be racists.”

Other examples claim the ADL “aggressively promotes social justice and political action,” that children would be reported to the ADL for using unapproved phrases like “all lives matter” or “build the wall,” and that the school system “must fully comply with the ADL’s rules and/or demands.”

Two of the disapprovingly-cited examples in the flyer deal with promoting rights of transgender students.

Padilla-Goodman said the guide “is full of uncontextualized and misinformed arguments, and it reveals a disturbing discomfort with teaching accurate history in our children’s schools.

“In a school district where that ignorance about history has erupted in schools as antisemitism or racism on several occasions and in very disturbing ways, this is the time the school district should stand firmly in their plans for inclusivity,” she added.

Kevin Cornes, co-founder and chair of MB Listens, also said that he and MB Listens vice chair Laura Steele first heard about the email and flyer while attending the June 16 forum on antisemitism at Temple Emanu-El, and that nobody he knew received it. The group has since published a timeline of events on its Facebook page.

A June 18 email from the school system to Mountain Brook parents thanked parents for their input and gave the “assurances” that the system would not be using No Place for Hate “and will be disassociating from the Anti-Defamation League,” and that more information would be forthcoming to answer further questions about anti-bias training “that has already occurred.”

The 12-page parent flyer had stated that a June 14 Diversity Update email had placed blame for confusion on articles and information from the media “that has caused confusion and concern about the Diversity Committee’s work,” said the program being considered by the system as its own framework is structured similar to No Place for Hate, and questioned whether the system can be trusted when it claims to have “completely severed its ties to ADL.”

The June Diversity Update from the system stated that each school in the system was establishing “a local diversity committee composed of students, parents, teachers, and administrators.” The ADL anti-bias training for staff was mentioned, but it was also stated that while No Place for Hate was one of many programs that had been considered, the system “has decided to develop its own… customized framework that promotes a school culture that honors individual differences, diversity and respects the dignity of all.”

In a statement on June 22, Mountain Brook Superintendent Dicky Barlow said the ADL programs and training “were initially selected because of their flexibility in allowing local customization,” but “some members of our community voiced concerns about information on the ADL’s website not related to our anti-bias training or framework. The discord surrounding the resources has become a significant distraction, and we believe that we can more effectively continue our work independently of the ADL.”

Padilla-Goodman said “we are deeply troubled by the politicization of anti-bias education in Mountain Brook Schools, and that the intentions and credibility of a storied organization that fights antisemitism and hatred is being questioned — especially at a time of soaring antisemitism in our nation.”

While Cohn does not believe anyone is working to undermine the goals of the committee, “we’ll clearly need to regroup,” and they have not had a chance to meet since the controversy started.

He said the committee is under the school board’s purview and solely makes recommendations that the board can decide whether to adopt.

A city council meeting is scheduled for June 28 at 7 p.m., where this topic is on the agenda. The next regular school board meeting is on July 12 at 3:30 p.m.

“This is not the time for increasing divisions in our communities,” Padilla-Goodman said. “We hope for the future of Mountain Brook that the community can come together to fight hatred and build a welcoming community for all.”