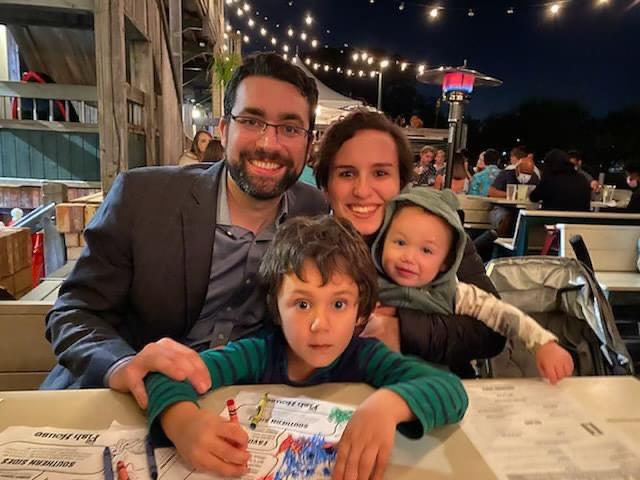 Rabbi David Cohen-Henriquez, who started as the new rabbi at Pensacola’s B’nai Israel last month, might have moved south from his former congregation in Marblehead, Mass., but as he says, he and his wife, Cynthia, bring “some cultural influence from even way deeper south.”

They both grew up in Panama City — the one in Panama, not the one 103 miles down U.S. 98 in the panhandle. He attended a small Reform congregation that his ancestors had helped begin over 130 years ago, Temple Kol Shearith Israel. He also attended a Jewish Day School, the Albert Einstein Institute, where his father had been one of the first students. Add in the Maccabi youth group and “all my life I was surrounded by Judaism.”

The congregation eventually became Conservative, and in 2002, Rabbi Gustavo Kraselnik arrived. “At the time, he was young, and it was the first young and hip rabbi that I had met, that really inspired me and to say, ‘Hey, I could do this. I would like to do this’,” Cohen-Henriquez said. “At the time I only imagined rabbis had to come already with white hair or balding, right?”

He had been studying international affairs and law at a Panamanian law school, but he decided to pursue the rabbinate “as soon as possible.” He started at Hebrew College in Boston, the youngest in his class.

While Cynthia was born in Panama, her roots are in Peru, which her parents fled in the 1970s when the military government took over.

After the year in Panama, he had the opportunity to lead a Sephardic congregation in Los Angeles, Tifereth Israel, which he said is more traditional and had services that sometimes lasted four hours. “It was a beautiful experience which enhanced our knowledge of many of the Middle Eastern Jews, as most of the people were Persian or Iranian Jews.”

They moved back to the Boston area and had been at Temple Sinai in Marblestone for the past six years before moving to Pensacola.

While his father’s family has been in Panama for many generations, his mother is from Brazil. But his family roots in Central America go much farther into the past. Moses Cohen-Henrique is featured in the book “Jewish Pirates of the Caribbean” as a rabbi who became a pirate, “a great mid-life crisis.”

In 1628, he helped a Dutch admiral capture the Spanish treasure fleet near Cuba, an operation said to be worth about $1 billion in today’s dollars and considered the biggest in pirate history. He then led a Jewish group in Brazil under Dutch rule and established a pirate island off the coast. After Portugal took Brazil in 1654, he fled and became an advisor to Henry Morgan, considered the greatest pirate of the era.

The family had originally been kicked out of Spain during the expulsion in 1492, going to Holland and then to the Caribbean. “They were attacking what they perceived as ‘the evil empire’ at the time, those who had kicked them out of Spain and persecuted them,” Cohen-Henriquez said. “So, what they did was in a way revenge.”

He said an uncle told him tales of treasure hidden in Jamaica, and there are reports that another descendant has established a prospecting claim at a site in Jamaica, based on a coded 1670 map that alludes to a major dispute between Moses Cohen-Henriques and his brother, Abraham.

Jerry Gordon, president of B’nai Israel, said the Pensacola area has “a burgeoning Latino contingent from Central and South America” as well as many Brazilians, so it is advantageous that Cohen-Henriquez also speaks Spanish and Portuguese.

After a six-month search and review of 15 candidates, the Conservative congregation voted unanimously on April 12 to have Cohen-Henriquez join what he refers to as the family.

They have two young sons, Elliott and Oliver, and how congregants reacted to the boys was also a big factor. “It is a sign that, you do not see that in too many temples, when people are excited to see children running around the temple and encouraging it sometimes,” he said. While he was leading a service, Oliver went running up to the bimah, and Cohen-Henriquez realized that because of the pandemic and that Oliver had not been to a synagogue since his bris, he had never seen his father lead a service.

“I was so concerned about him disrupting things,” Cynthia said. “I was then so relieved when Gerry Goldstein told me, ‘Let him go up there, let him be with his Papa’.”

In addition, “the way people hugged us… immediately it was genuinely like we had arrived home,” Cohen-Henriquez said. Because of the difference in Covid response between Massachusetts and Florida, “It was just so exciting to see real people there shaking hands, and wanting to hug, and it was truly a heart-warming moment.”

For Cynthia, a major attraction is getting away from the cold weather that pushes the kids indoors for much of the year, and being close to the beach. “I used to go every week with my dad to the beach, and I love the idea of doing that with my kids,” and she contrasted that to the ocean up north, where even in the summer the water is too cold.

A health coach and herbalist, Cynthia plans to use her talents in photography and cooking at B’nai Israel. In addition to Central and South American recipes, she picked up a lot of Persian recipes in California. “I am extremely excited that this synagogue also has this part of their tradition of just being in the kitchen and welcoming people in the kitchen,” she said.

He also was impressed with the number of people at B’nai Israel during his weekend visit who are looking to convert to Judaism. “I was incredibly happy to feel that the congregation was very welcoming to converts, to people who want to be Jews by choice.”

He bases his rabbinate on teaching texts to empower people to be comfortable with their tradition. He wants to enable people to be prayer leaders and understand the service so they can feel more at home, and also wants to make strong personal connections and be an ambassador to the broader community.