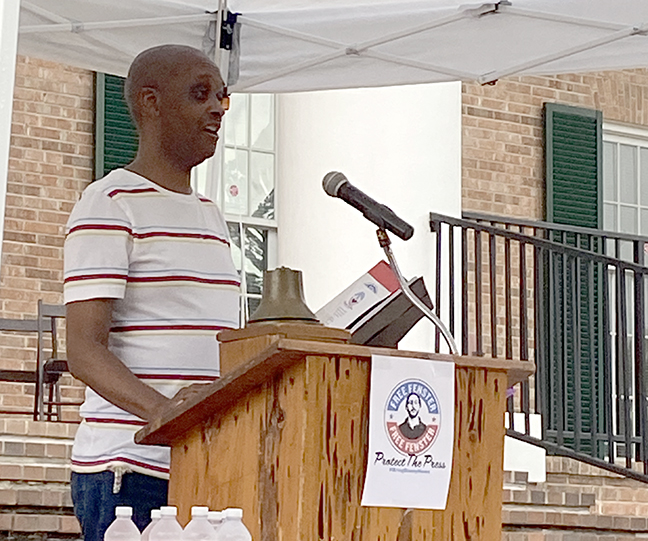 On June 27, a rally was held in New Iberia, La., on behalf of a Jewish journalist from Detroit who has been detained and imprisoned in Myanmar.

The rally was a demonstration of the effect Danny Fenster had on the small central Louisiana town during brief time he was there as a reporter for the Daily Iberian, and the deep friendships he made with the community.

About 35 attended the rally, which was held in front of city hall under stormy skies. Some wore the “Free Fenster” T-shirts that had been designed by Robbie Biederman, longtime friend of Danny’s brother, Bryan Fenster, with proceeds from the shirts earmarked toward a charity of Danny Fenster’s choice when he returns.

Charleen Markle, an organizer of the rally, said they wanted to “bear witness to the injustice being done to Danny, and call for his immediate release.”

Fenster worked for the New Iberian from August 2017 to February 2018, and won first place for Best News Story from the Louisiana Press Association for a story on the families of murder victims who are still looking for closure years later.

Phebe Hayes said Fenster “made it a priority to get to know the people of the parish and the city.” Several speakers spoke of how he explored the long-neglected African-American West End, telling stories that had long been ignored.

Phanat Xanamane asked “what would bring a progressive liberal young man with his talent to New Iberia,” and said Fenster wanted “to seek a better understanding of his fellow citizens and learn about people… who have a different point of view,” because understanding each other improves the world. 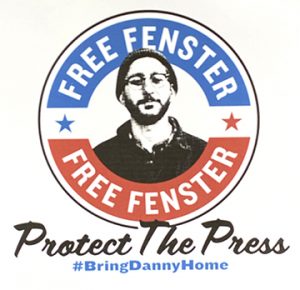 Robby Carrier-Bethel spoke of her “brother-sister friendship” with him. She recalled their first lunch together, at Brenda’s Dine-In, where he spoke of his “love and commitment to truth, justice, journalism” and his Jewish faith. When his brother came to town to do photography, “Bryan became my brother also.”

In the West End, “Danny and Bryan have photographed and written hours of individual human stories, whether they are delightful or painful, and they have meant a lot,” she said.

After leaving New Iberia, Fenster went to Thailand and then Myanmar, where he became managing editor of Frontier Myanmar.

Markle said Fenster’s “passion for telling the stories of the oppressed took him from here to Southeast Asia.”

On May 24, he was heading to Detroit on a surprise visit to see his family for the first time in three years when he was detained at Yangon International Airport by Myanmar officials. Reportedly, at least 88 journalists have been detained since the Feb. 1 coup when Myanmar’s military ousted the ruling party after a contested November election.

Fenster, 37, has been held at Insein Prison ever since.

The Detroit Jewish News reported that Fenster was finally granted a phone call with his wife, Juliana, on June 30. His brother, Bryan, was patched in on the call and told the Detroit paper that “We established he was OK, and we told him the whole world is watching and we are doing all we can as a family to get him out. He sounded good, and he said he was healthy. I was even able to crack a joke with him and hear him laugh. We know he will be home soon, but not soon enough.”

Rep. Andy Levin of Michigan has been working with the State Department and U.S. Ambassador to Myanmar Thomas Vajda to try and secure Fenster’s release.

On July 1, there was a hearing where Fenster was remanded into custody for another two weeks. U.S. embassy officials accompanied him to the court hearing, which did not detail what he is being charged with or when he might be released. His next hearing is July 15.

That day, Frontier Myanmar reported that a letter filed with the court showed Fenster was arrested for working at Myanmar Now. According to the publication, Fenster resigned as editor of Myanmar Now in July 2020 and started working for Frontier the next month.

The military regime banned Myanmar Now and four other independent media organizations on March 8, and Myanmar Now’s offices were raided the same day, Frontier reported. On March 27, the police were asked to open a criminal case against “responsible editors” of Myanmar Now, which currently publishes online.

“Frontier believes Danny has done nothing wrong and we reiterate our call for his immediate and unconditional release,” the publication stated in its July 1 article.

Myanmar Now said Fenster worked there from mid-2019 to July 2020 as a copy editor for their English-language website. “His sole assignment was to edit the news stories which had been translated from Burmese into English. He held no other position in the management of the newsroom nor was he affiliated with any type of non-editorial duties,” the statement said. “It is regrettable to learn that he has been falsely accused of continuing to be an active member of Myanmar Now during the recent court proceedings against him.”

Myanmar Now says Fenster “never should have been arrested, and we call for his immediate release.”

Dwayne Fatherree of the Daily Iberian also insisted that Fenster “should be freed, for saying things that are true.” He said journalists write the first draft of history, and Fenster is “wonderful” at writing stories that need to be told.

On July 1, Fenster’s attorney, Than Zaw Aung, said “Danny looks slim. He lost weight. He requested me to tell others he is okay and fine.”

Rev. Matt Woolley from Church of the Epiphany said Fenster’s crime was “to stand up for justice. To stand and speak the truth.”

Hayes added that Myanmar officials might have thought they could hide things by silencing Fenster, but “it has had the opposite effect. Danny’s imprisonment is bringing attention to Myanmar” and the suffering there.

The rally concluded musically, with Kenel Williams singing “Go Down Moses.” Brenda DeKeyzer Lowry, who sings at her church and has been soloist for many years at Gates of Prayer, the synagogue in New Iberia, did a Mishebeirach and “Oseh Shalom,” explaining to the crowd what the two Hebrew prayers meant.

Hayes said “we hope this gathering of Danny’s New Iberia friends provides some comfort to his wife, parents, brother and other family members.”