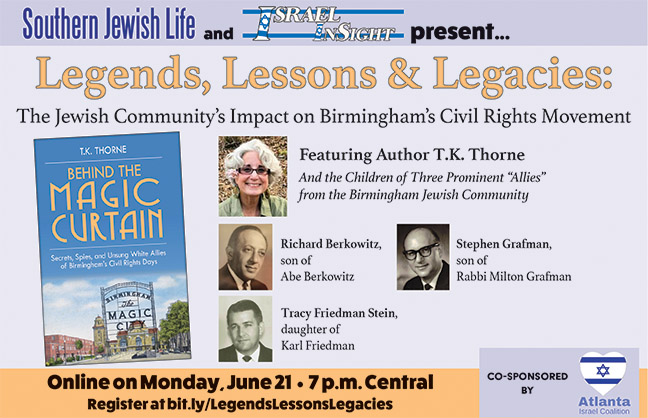 Many of the “lanterns” that helped light the way for the Birmingham Civil Rights movement came from the city’s Jewish community at a time when Jews in Birmingham were facing their own challenges.

That, and the courage that some of Birmingham’s best known Jewish leaders displayed during these turbulent times, were highlighted in a recent online talk by local author TK Thorne.

Thorne, in her new book “Behind the Magic Curtain: Secrets, Spies, and Unsung White Allies of Birmingham’s Civil Rights Days,”  explores the little-known behind-the-scenes roles played by white allies in Birmingham during the struggle for Civil Rights in the 1950s and 1960s, including leaders in the Jewish community. The book was released by NewSouth Books on June 29. 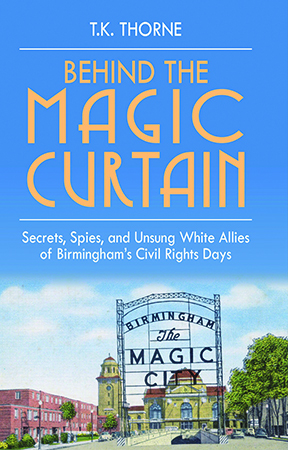 “Legends, Lessons and Legacies” were the themes of the June 21 Zoom program that featured Thorne. The program was sponsored by Southern Jewish Life and Israel InSight magazines and the Atlanta Israel Coalition.

During the Civil Rights era, many in Birmingham’s small Jewish community were conflicted over what their role should be, as Thorne explains in her well-researched book.

Memories of the Holocaust, which took place in the 1940s, were still raw along with incidents of antisemitism in the Deep South.

As Thorne notes in her book, Jews themselves were not fully accepted into white society, faced antisemitism and ran the risk of jeopardizing themselves, their families and their businesses and professions if they publicly aligned themselves with African Americans and others advocating and demonstrating for Civil Rights.

This backdrop is what makes the stories of Karl Friedman, Rabbi Milton Grafman, Abe Berkowitz and other Jews highlighted in the book not only “lanterns” for the movement, as Thorne said, but also beacons, especially for the Jewish community.

Thorne was joined on the program by the children of Friedman, Grafman and Berkowitz, three figures she highlighted in her book for their bold and brave actions.  Joining her were Richard Berkowitz, Stephen Grafman and Tracy Friedman Stein, who offered perspectives on the leadership their fathers provided during these challenging times.

The program also highlighted the work these three men were doing at the same time on behalf of Zionism and Israel.

Southern Jewish Life Editor and Publisher Larry Brook served as moderator, from the board room at B’nai Zion in Shreveport.

Karl Friedman’s daughter, Tracy Stein, who now lives in Houston, was a young girl at the time but vividly remembered Civil Rights meetings at her home with African Americans, her father battling tirelessly for greater rights for African Americans, and a bullet being shot through their window because of her dad’s activities. He never replaced the pane with the bullet hole.

Stephen Grafman, a resident of suburban Washington, has chronicled his dad’s career with love, admiration and attention to detail. He said Rabbi Grafman was his “best friend.” He painted his father accurately as a force for good in Birmingham and recounted his father’s bold willingness to stand up publicly for what he believed.

Abe Berkowitz’ son Richard, who lives in Savannah, portrayed his dad as fearless, resolute in the pursuit of justice, unafraid and highly skilled and determined. This also is the how many who knew him perceived him.

Fearless and resolute describes all three men well and though they are all deceased, their memories continue to inspire those who knew them.

Based on attendance and feedback from the Atlanta Israel Coalition, which managed the Zoom program, the online event was quite successful.

“The attendance rate was an unbelievable 69 percent, that is 221 of the 318 registered attended,” reported AIC’s Lee Tanenbaum. “The usual performance rates are 25 to 30 percent.  AIC usually gets 45 to 50 percent, which AIC’s Zoom rep says is wonderful.” About 60 more viewed it live on Facebook.

Tanenbaum also reported that in the immediate aftermath of the program, 98 percent of the 62 who completed a followup survey enjoyed the program.

This is heartening because as part of its expanding coverage and impact, Southern Jewish Life plans to host similar online programs in the future.

For those who missed the program, “Legends, Lessons & Legacies” can be viewed here.