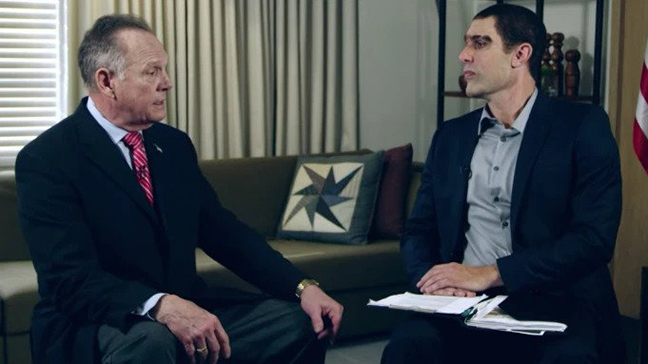 In a 26-page ruling on the $95 million suit, Judge John P. Cronan of the Southern District in New York ruled on July 13 that viewers of the segment on Cohen’s “Who Is America?” would have known that the interaction between Moore and a fake Mossad agent with a “pedophile detector” was a joke. He also noted that Moore had signed a waiver before the encounter.

“Who Is America” debuted on Showtime in July 2018, and an interview with Moore was aired during the third episode, on July 29. Moore filed suit a month later.

During the segment that aired, Cohen was disguised as Erran Morad, “a supposed Israeli anti-terrorism expert and former Mossad agent.” During the segment, Morad started by talking about Alabama’s historic support for Israel, then pivoted to innovations in Israeli technology, including a fraudulent device that supposedly detects child molesters through a hormone in their sweat.

During Moore’s 2017 run for U.S. Senate, four women accused Moore of inappropriate conduct when they were underage and he was around 30 years old. Moore passionately denied the allegations, but in the segment, Morad’s device “malfunctioned” by going off whenever it was placed near Moore, much to the feigned surprise of Morad. Moore then cut off the interview and walked off the set.

After the segment taped, Moore’s counsel sent a letter saying they would seek legal remedies if the segment aired.

Moore had been lured to Washington for the interview under the pretext that Yerushalayim TV — which does not exist — was going to honor him for his support of Israel, as part of Israel’s 70th anniversary celebrations.

The suit states that “this false and fraudulent portrayal and mocking of Judge Moore as a sex offender, on national and international television… has severely harmed Judge Moore’s reputation and caused him, Mrs. Moore and his entire family severe emotional distress, as well as caused and will cause Plaintiffs financial damage.”

In a texted statement to the Associated Press, Moore said “of course” he will appeal the ruling, especially since the court referred to Cohen’s behavior with terms like “trick” and “joke” but the court “will still do nothing to rein in his fraudulent misconduct.”

After the ruling, Cohen tweeted “nice try” to Moore, and added that accusations against Moore of “inappropriate sexual encounters with young females, including one who was underage” are “now part of the legal record” as a result of the lawsuit.

Moore is also involved in a pair of defamation suits with one of his main accusers, Leigh Corfman. In the suit against Moore, Corfman claimed Moore and his campaign “defamed Ms. Corfman, repeatedly and in all forms of media, calling her a liar and questioning her motivation for publicly disclosing that Mr. Moore sexually abused her in 1979 when she was a 14-year-old high school freshman and he was a 32-year-old assistant district attorney.”

In August 2020, an Alabama judge denied Moore’s motion for summary judgment in Corfman’s defamation case. The case was delayed because of Covid suspending jury trials.

Part of Moore’s rise to prominence in the early 1990s came in a custody case involving a woman in a same-sex relationship. Moore refused to recuse himself despite his numerous public statements against homosexuality, and his assistant had let several fundamentalist churches know when the case would be heard in Moore’s courtroom so their members could be present.

On Aug. 5, Rochester dismissed the Judge Roy Moore for U.S. Senate campaign as a defendant in Corfman’s case, leaving just Moore. Moore said “My campaign for US Senate has in no way defamed plaintiff Leigh Corfman. We look forward to proving in open court, before a jury, her political motivation for making false allegations in my Senate campaign.”

In January 2020 Moore also sued the Washington Examiner, alleging its coverage of accusations against him were “fake news” that damaged his reputation. This was reported to be the sixth such suit he has filed over coverage of the controversy.