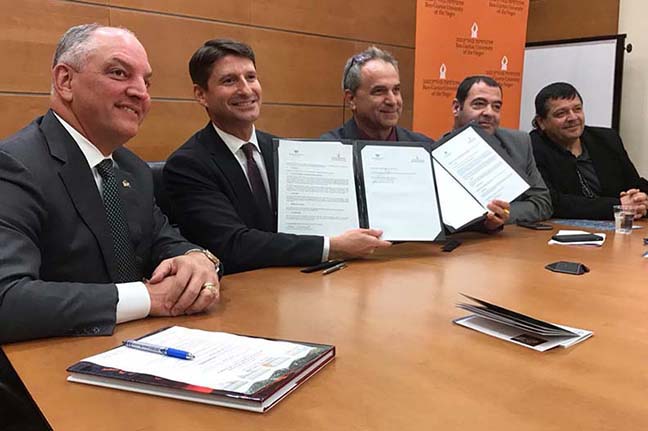 Louisiana Governor John Bel Edwards at signing of collaboration agreement between the Water Institute of the Gulf in Baton Rouge and Israel’s Zuckerberg Institute for Water Research, at Ben Gurion University on Oct. 29, 2018.

The Abraham Accords were signed between Israel and four Arab countries during the Covid pandemic. Now that travel to Israel is once again possible, groups are starting to include visits to those countries as part of the package.

The Jewish Federation of Greater New Orleans announced “a unique mission to Israel” scheduled for next July, with an optional extension to the United Arab Emirates.

The Israel trip will be July 12 to 18, then the UAE extension will be through July 22. The Israel visit will include the opportunity to take part in the opening ceremonies of the 2022 Maccabiah Games, the third-largest sporting event in the world.

Arnie Fielkow, CEO of the Federation, said the trip is open to the entire state, and is for both Jews and non-Jews. The mission will have five tracks, including four business tracks, and they expect around 200 participants.

According to the Federation, the mission “is designed to strengthen Louisiana’s economic ties with Israel by helping to increase exports to the country, build strategic relationships, and explore new business opportunities.”

The tracks include medicine, biotechnology and healthcare; energy, water management and engineering; transportation, including ports and maritime; and cyberspace and security. Jones Walker LLP is the title sponsor, with additional sponsors including the World Trade Center New Orleans, the New Orleans Business Alliance, GNO Inc., and Louisiana Economic Development.

The fifth track is the Explore Israel track, which will be open to the state’s Jewish community. The mission will include visits to Jerusalem, Tel Aviv, and industry specific places of interest for each of the four business tracks.

Registration information will be announced in the fall.

Registration is already open for a North Louisiana Jewish community mission to Israel, Feb. 14 to 24. Rabbi Feivel Rubinstein, program director at the North Louisiana Jewish Federation, will lead the mission, having led several similar groups before, and having lived in Jerusalem for two years. There will also be an Israeli tour guide with the group.

The trip is currently limited to 30 participants, with the possibility of expansion if there is a large waiting list. There will be two nights at Kibbutz Hagoshrim in the Galilee, six nights at the Dan Panorama in Jerusalem and two nights at the Renaissance Hotel in Tel Aviv.

Itinerary stops include Caesarea, Tzfat, the Golan Heights, Shabbat with home hospitality in Jerusalem, Masada and the Dead Sea, an archaeological excursion, and exploring Jerusalem, Tel Aviv and Jaffa.

The North Louisiana Federation has a $300 subsidy available for members who want to go on the trip.