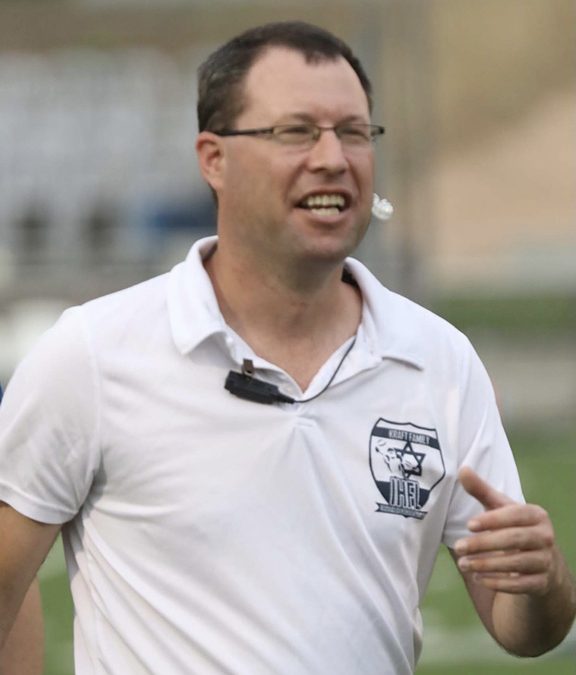 American-style football is growing in Israel, thanks in part to a private Christian school in Huntsville.

It is at that school, Madison Academy in Huntsville, that Israeli football enthusiast Ori Shterenbach’s love for the American-birthed game deepened after a great experience coaching at the school.

Today, Shterenbach, sports director of American Football in Israel,  looks back on the experience and recollects fondly the coaching education he got, which included, among many great memories, attending University of Alabama Coach Nick Saban’s football camp.

He also happily remembers his interaction with Huntsville’s Jewish community, which warmly embraced Shterenbach and his then-girlfriend, now-wife Vardit.

The 40-year-old Shterenbach grew up at a time when there was no organized American-style football in Israel. So how did he get interested? The credit sort of goes to Saddam Hussein, the former dictator of Iraq and one of Israel’s major enemies at the time.

Shterenbach, in a recent Zoom conversation from his home in Haifa, recalled January 1991 when, during the Gulf War, Hussein’s Iraq was firing Scud missiles at Israel, forcing Israelis to huddle in safe rooms during the attacks.

“Since we were up all night, I got to watch my first Super Bowl, which came on in the middle of the night Israel time,” recalled Shterenbach, who had always been involved in sports.

His interest in football began growing and while traveling abroad after completing his military service, he encountered American football first-hand via a pickup game. After that he was hooked.

He and five other people got together and founded the Israel Football League. He became both the quarterback and coach of Haifa’s team. It’s then that what would become his connection to Alabama took hold.

“A lot of American coaches were coming to Israel to help us,” explained Shterenbach. One of those was Eric Cohu, a high school coach at Jackson Academy in Tennessee.

“He offered me an internship to come to the U.S. to learn the trade, and to learn about the origin of football and to live the life of a football coach.”

Shortly thereafter, Cohu got a new job at Madison Academy in Huntsville. Shterenbach came in 2010 to join him, and that’s how the Alabama-Israel Football League connection started. Shterenbach would stay in the Huntsville area for a year.

Though it was more than 10 years ago, wonderful memories of his North Alabama experience remain fresh and stick with him.

“Everything was great — the food, the people, the atmosphere, the weather, the Southern hospitality. I still miss it. It felt like home because people were so good to Vardit and me — both the Jewish community and the whole community.”

He also remembers with pride the team’s achievements during his time at Madison Academy.

“When I was there we finished 10-0 and got to the quarterfinals of the state championship.  Two years later we won the state championship and would win it three years in a row,” including a 15-game playoff winning streak.  Among those he coached was Jordan Matthews, who would eventually be drafted by the NFL’s Philadelphia Eagles.

While in Alabama, Shterenbach also had the chance to be an ambassador for Israel, a role he still plays.  “People were so interested that I was from Israel. I went into classes and lectured about Israel. The students I met still talk with me, text me and take an interest in what is going on in Israel.”

Since returning to Israel after his year in Alabama, Shterenbach has been a leader in building the Israel Football League and its umbrella organization, American Football in Israel. He has held several key positions and today is in charge of the development of American football at all levels — from grassroots to high school to adults to women’s football, from flag to tackle.

He works closely with players, coaches and officials and is one of American Football in Israel’s most prominent faces.

“It is tough to start a new sport in Israel, and football is such an expensive game with all of the equipment and gear. We don’t have it here, we have to get it from the U.S. and our budgets are limited.”

The league welcomes donations of money and equipment. People can donate through Friends of the Israel Football League.

The Friends organization was founded in 2015 “by Jewish and Christian friends who have a love for Israel and a passion for football,” according to its website.  Its mission is “Building Community in the Holy Land through Football.”

The Friends group believes that “Bringing together young men or women on a football team gives them tools and values for the rest of their lives. Jews, Christians and Muslims, religious, secular and ultra-Orthodox, native Israelis and new immigrants, all become one working and striving, as a team, for victory.”

Adds Shterenbach,“We don’t discriminate. Anyone can play.”  Players include native-born Israeli Jews, American Jews who have moved to Israel, Israeli Arabs and Palestinians.

Despite the challenges the league and American football in general have faced in Israel, Shterenbach is proud of the growth that he and others involved with the sport have achieved.  “We have done a good job in building it.”

There are eight teams in the Israel Football League, about 10 in its high school league and close to 1500 participants overall.

The Israeli tackle national team will compete in the European international competition, and in December, American Football in Israel will host the flag football world championship in Jerusalem, with over 20 countries participating.

Competing teams also will qualify for the World Games, which will be held in Birmingham in 2022. This will be the first time flag football is featured in the World Games.

“Here in Israel, we love football,” said Shterenbach. “It is growing, always evolving, and I love the connection with Alabama. I will always be grateful for that connection and will try to keep it. Without it, I wouldn’t be where I am today.”