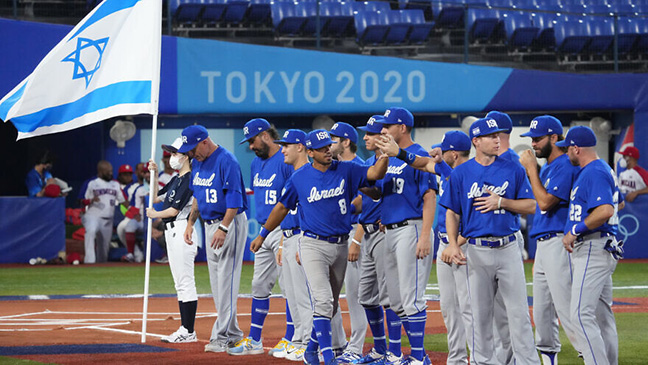 The clock struck midnight on Team Israel’s run in the Olympics, as the team placed fifth in the six-team field of Olympic baseball, going 1-4 overall. Analysts had given Team Israel a 45 percent chance of medaling.

Two players with ties from the region were part of the team that started an improbable run to the Olympics and captured international headlines in the sport.

Players are eligible to compete for a country if they are eligible for citizenship; with Israel’s Law of Return, that makes any Jewish player in the world eligible. Five members of Team Israel were native-born Israelis.

The Olympics was a return trip to Tokyo for Team Israel. In 2016, they were ranked 41st in the world, then surprised everyone in the qualifiers for the World Baseball Classic in Tokyo. At the 2017 tournament, they finished sixth, in a Hollywood-esque run that did become a movie.

They also competed in the 2019 European Baseball Championships and the 2019 Europe/Africa Olympic Qualifier, where they made the six-team field for the Olympics.

Bleich played professional baseball for 11 years after graduating from Stanford University. He was drafted by the New York Yankees in 2008 and spent much of his career at the AAA level, with a brief stint in the Majors with the Oakland Athletics in 2018. After retiring, he became a pitching analyst for the Pittsburgh Pirates in 2020.

California to Mississippi to Olympics

Penprase played college ball at Mississippi Valley State, a historically Black college. The Southern Californian was not recruited heavily out of high school, but Doug Shanks, who coached the Delta Devils at the time, saw his recruiting video online.

Penprase told HBCU Sports that he visited Itta Bena and fell in love with the region. “I was like, I’m coming here, like, I’m coming,” he said. “There’s just no other offer and the schedule was amazing being able to play Mississippi State, Alabama, and then also experiencing what a historically Black college was like.”

He was SWAC All-Conference in 2005 and 2006, and in 2006 he led the nation in stolen bases, with 60. He was drafted by the Philadelphia Phillies in 2006. He mainly played single-A ball for Philadelphia and the Boston Red Sox, then signed with the Fargo-Moorhead RedHawks, where he played from 2008 to 2015 and set several career records for the team.

He played professional baseball for 10 years, retiring in 2015 to work in the construction industry and put that chapter of life behind.

Then he got a message from Israel Baseball, asking him to try out for the national team as it attempted to qualify for the Olympics. He was hesitant to get back into baseball mode, until his wife reminded him of one thing — it’s the Olympics.

As with the other players on the team who were not Israeli, he became an Israeli citizen under the Law of Return. His mother is Jewish and his great-grandfather was the last Chief Rabbi of Rhodes, but the extent of his practice had been Passover and Chanukah.

During the qualifying tournaments, where the unheralded Israeli team stunned the world by making the six-team Olympic field, he had 12 RBI in 21 games.

In addition to the Israeli team, he spent a few months with the Pomona, N.Y., Boulders of the Frontier League this year, where the manager was a teammate in Fargo and more than willing to let him set an example for younger players. It didn’t hurt that Team Israel was also scheduled to play Pomona as a pre-Olympics tuneup.

During the Olympics, he was amused to see that his name was misspelled on the scoreboard when he was at the plate. “I’m an Olympian and my name is being pronounced all weird, my name is being spelled wrong, and the umpires still aren’t good,” he said on Instagram, adding that it “doesn’t matter.”

In the first game on July 29, Israel tied the game at 5 in the top of the ninth with a single homer by Ryan Lavarnaway. In extra innings, runners automatically start on first and second, but in the top of the 10th, Oh Seunghwan struck out all three Israeli batters. Penprase had been substituted as a pinch runner for Nick Rickles, who had started the inning at second. In the bottom of the inning he was the designated hitter, but did not get a plate opportunity.

Bleich took over in the bottom of the 10th, and after a sacrifice advanced both runners and the next batter flied out to third, Bleich hit the next two batters, sending the winning run across the plate and giving South Korea a 6-5 win.

The second game in pool play wasn’t as close, as the United States took a 3-0 lead in the third and cruised to an 8-1 victory. Bleich started the top of the sixth inning, striking out two while Todd Frazier reached first on a throwing error. Jonathan Demarte took over for Bleich and Frazier scored an unearned run on a single.

In the bottom of the ninth with two outs, Penprase pinch-hit for Robb Paller but struck out.

After being 0-2 in pool play, Israel faced an elimination game against Mexico on July 31, and rallied with a 12-5 win that knocked Mexico out of the tournament.

Penprase went 1-for-4 with one run and two runs batted in. His damage came in the six-run seventh, where he singled to center, scoring Ty Kelly and Mitch Glasser, stole second and then scored on a Scott Burcham double. Bleich did not pitch.

With hope rekindled, Israel met South Korea for a grudge match on Aug. 1. But Israel’s hopes took a hard hit with an 11-1 loss that was called after seven innings due to the mercy rule. Penprase, playing left field, went 0-for-3. In the sixth, Bleich entered with a runner on first and no outs, with five runs having already been scored that inning. The inning’s second error on a fielder’s choice put a runner on second, then after a strikeout, Bleich gave up a two-run homer before getting a groundout to end the inning.

Israel’s medal hopes rested on the game against the Dominican Republic on Aug. 3, but the Dominicans erased Israel’s 6-5 lead in the bottom of the ninth, knocking Israel out of the tournament, 7-6. Bleich did not pitch.

Penprase went 2-for-4 in the final game. In the fifth, he advanced a runner to second while a play at the plate nabbed Rickles. Penprase would then score on a two-run double, tying the game at 2. In the top of the ninth, Penprase singled but was caught in an inning=ending double play. Former Major League All-Star Jose Bautista had the walk-off single that ended Israel’s run.

After the game, Team Israel tweeted, “The dream we never dreamed of came to an end tonight. But know that throughout our inaugural Olympic journey, we felt your support from around the world.”

In Israel, much of the emphasis was on how close Israel came to medaling in a sport that just a decade ago was the sole province of small groups of American and Canadian Israelis on improvised fields.

The victory against Mexico was also Israel’s first win in any Olympic team sport since 1968.

After the final game, Penprase thanked the team on Instagram, saying “I can’t help but sit here and wonder if anything will ever be this exciting again. Thanks to Israel Baseball for the opportunity of a lifetime. I’m still stirred with emotions, and I know we all poured our hearts into every game we played, from Bulgaria to Tokyo.”