“The Day After” documentary kicks off Sidewalk Film Festival’s return 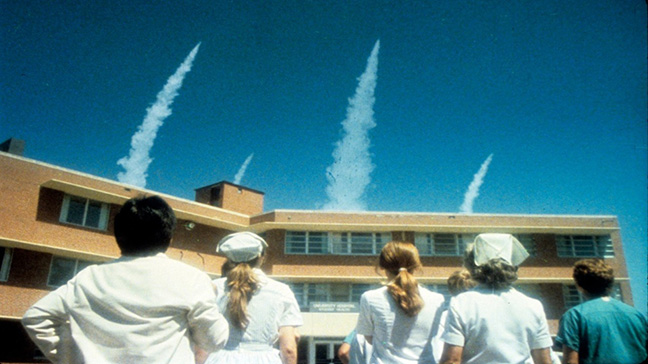 A significant “Television Event” will kick off the Sidewalk Film Festival’s Homecoming to downtown Birmingham in 2021 and the documentary’s Jewish director is excited about the big-screen debut of the film, which examines 1983’s television movie that shook the world – “The Day After.”

“’The Day After’ came out during a time where we just had three networks and Cold War fears were heightened,” said “Television Event” Director Jeff Daniels. “More than 100 million people watched it,” making it the highest-rated television movie of all time, “and it really brought out a dialogue in our polarized nation. The power of storytelling can bring people together and create these galvanizing moments.”

In “The Day After,” the U.S. is poised on the brink of nuclear war. This shadow looms over the residents of the small university town of Lawrence, Kans., as they continue their daily lives. When the unthinkable happens and the bombs come down, the town’s residents are thrust into the horrors of nuclear winter.

Daniels, 43, grew up in New York City and saw “The Day After” when he was five years old. “The atomic angst was palpable, even for someone my age,” he said. The film “wasn’t just a television event, it became a major news event. When I started doing some research for the documentary, I wanted to understand how someone could make a film about something so frightening and turn it into a primetime family event on ABC.”

The filmmaker got interested in making the documentary after he saw a segment in 2018 on the 25th anniversary of “The Day After.” He read Meyer’s memoir and interviewed the director for several hours.

“Nicolas Meyer was a big-time film director and he took ‘a step down’ to direct the film but he said it was all worth it just to make a political statement,” said Daniels. “That spoke to me as a filmmaker.”

Daniels also included interviews with former ABC news anchor Ted Koppel, psychologists, cabinet members under former president Ronald Reagan and those involved in the making of “The Day After.”

“The people I interviewed who worked in Reagan’s White House said the movie really changed him,” said Daniels. “He was a former actor and understood the power of storytelling and how movies could affect people. This led to a change in his rhetoric. He would go on to believe and say publicly that nuclear war could never be won and should never be fought.”

Growing up, Daniels was always fascinated by history, world events and learning more about his Sephardic Jewish roots. His grandfather was a photographer for the U.S. Army during World War II.

He started making documentaries shortly after graduating college in New York and interning on the Ken Burns television docuseries “Jazz.”

While in college he studied for a semester in Melbourne, Australia. At age 23, encouraged by Australian government’s support of “filmmakers who wanted to make politically important documentaries,” he permanently relocated there. He has been married for 10 years and has a nine-year-old daughter.

Daniels has made several Jewish-focused documentaries in the past, including “Mother with a Gun.” That film looks at how Jews should respond to a global increase in attacks by focusing on the Jewish Defense League’s Shelley Rubin, who was married to former JDL leader Ira Rubin.

The filmmaker said he regrets that he can’t make it to Birmingham for the festival, but he will likely participate virtually with the Q&A after the movie.

“I’m just so appreciative they selected the movie. There are some excellent documentary and feature films at the Sidewalk Film Festival,” said Daniels. “I’ve never been to Birmingham but I have been to Huntsville. I attended Space Camp at the U.S. Space and Rocket Center in 1987.”

The Southern Jewish Life magazine is sponsoring the documentary “Storm Lake,” written and produced by Jewish filmmaker Beth Levison. The movie focuses on the importance and challenges of local journalism today through the prism of a small-town Iowa newspaper.

In another documentary at Sidewalk, “Not Going Quietly,” Ady Barkan embarks on a national campaign for healthcare reform after being diagnosed with ALS. Jewish filmmaker Nicholas Bruckman directed the film, which premiered at South by Southwest earlier this year.

William Klein provides an ultimate behind-the-scenes look at the 1981 French Open in “The French.” The grand slam tennis event, featuring iconic players such as John McEnroe, Bjorn Borg, Chris Evert, Martina Navratilova and Yannick Noah, proved to be a “crucial moment in a crucial year in the history of the game.”

“Zola,” an adult dark comedy based on a viral tweet by Aziah “Zola” King, is directed by Janicza Bravo, who has been quoted as saying “I feel comfortable saying that I might be the only black, Panamanian, Jewish woman working in comedy.”