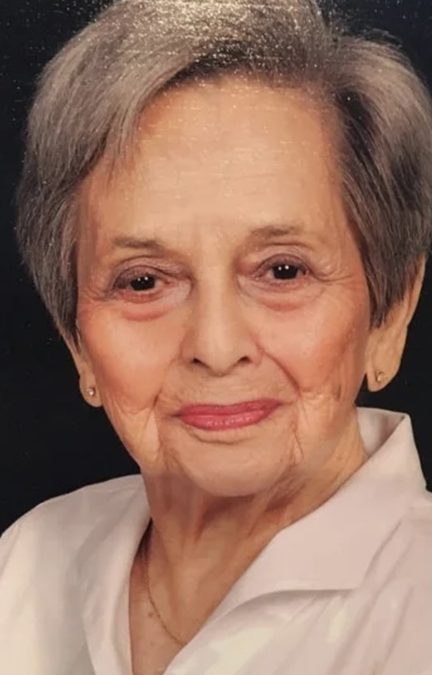 This was evident not only in excerpts from a past video tribute shown at this year’s BHEC L’Chaim (To Life) fundraising program on Aug. 22, but also throughout the recent largely online event that showcased facets of the organization that she led for years.

The video featured community leaders speaking about her vision, determination, leadership, energy and creativity, and the enduring mark she made not only on the Jewish community but on the broader Birmingham community.

“She is an amazing individual,” Holocaust survivor Max Herzl said in the video. All who knew her would agree.

Adding to the tribute, her daughter, Birmingham Jewish leader and interim BHEC director Lynn Raviv, said how proud her mother would be to be honored by this annual education and fundraising program “that continues to tell about the essential work of BHEC.”

Added Raviv, “We also honor our Holocaust survivors by preserving their legacy and telling their stories.” Those survivors “continue to be the true inspiration for BHEC.”

Schuster and Blitzer grew up together in Buffalo, N.Y., where both were the children of Holocaust survivors.

Schuster began by reminiscing about growing up together. Yet, she said, looking back she didn’t know much about his family’s story.

“My family story is probably not all that different from yours,” said Blitzer.

His mom and dad grew up in Poland. After Adolf Hitler rose to power, family members were taken away. All four of Blitzer’s grandparents died at the hands of the Nazis though other family, including his parents, survived.

A few years ago, Blitzer did a story for CNN on his family’s saga.

After World War II ended, the broadcaster’s parents landed in Germany, where his father had found a job and where the 73-year-old future CNN news anchor was born.

One day his dad saw a line of people. Not knowing what the line was for he still got in it, assuming it was for something good.  Standing in line, his father learned it was for visas to America. He signed up himself, his family and other surviving relatives.

Congress had passed legislation to allow Holocaust survivors to come to the U.S., and within a few months the Blitzers were approved for entry.

The way the system worked they were assigned to a specific city. His father was pleased because he thought Buffalo was in the New York City area and there would be a lot of Jews.

That is how they wound up in Buffalo, which had a relatively small Jewish community. Yet his dad, who built a successful business, always remained grateful.

His parents were among the most patriotic Americans he ever knew, said Blitzer. They flew an American flag outside their house because they were so grateful and proud to be in the U.S.

Schuster, noting the hate, antisemitism and racism that has erupted in our country, asked him, “Where do you think our country is going?” Blitzer said he is an optimist and that he believes the American people are wonderful people. “We will get through this.”

Added the CNN newsman, “I think what you are doing in Birmingham with BHEC is so important. I wish there were many other communities all over the country doing what you are doing. If you look at polls, there are so many people who don’t know what happened… It is even more important today because there are so few Holocaust survivors still with us.”

Presented by BHEC in partnership with Red Mountain Theatre, the event featured entertainment, education and remembrance, including musical selections by the Red Mountain Performing Ensemble that reflected Weinstein’s love for music.

The program also highlighted BHEC’s highly-effective teacher training program which has reached thousands of students throughout Alabama over the years.

Teacher Tricia Skelton from Opelika shared some thoughts about the impact of the program. For the last nine years she has taught sixth grade history, including World War II and the Holocaust. At first, she said, “sometimes I would not even know the answers.”

She became connected with BHEC and began to take advantage of its teacher training opportunities which included training at the U.S. Holocaust Memorial Museum and a trip to Europe with support from BHEC. She said the trip was “an amazing and life-changing experience.”

BHEC education director Ann Mollengarden spoke about her work. “For students today, studying about the Holocaust is like studying about a vanished world. It is the personal testimony that makes this world visible again.”

BHEC has documented the stories of more than 170 Alabama-connected survivors.

Mollengarden also mentioned plans for BHEC to move into a new facility and expand its offerings this coming year.

“Our new library will offer a rich resource of material for scholars and the public. Phyllis was a champion of this library and would be thrilled to see it opening.”

BHEC has entered into a long-term lease with Temple Emanu-El and construction has begun. Included in the program was a “sneak peek” video of the new facility.

The organization’s board president Karen Allen told the audience that 85 percent of BHEC’s work is funded by the money raised through the annual L’Chaim event.

She also noted that the Torah portion of the week commands that acts against the Jewish people must be remembered for all time.

Allen announced that L’Chaim had raised about $300,000 (there’s still time to donate) and also unveiled plans for a forthcoming capital campaign to finance the new facility. A quiet leadership phase has raised just under $1 million toward a $2.2 million goal in what will be a statewide campaign.

“Phyllis knew we needed a Holocaust education center and she created one,” said Allen. “I know if she were here today she would say, ‘Great job’ but would add that there’s so much more that needs to be done.”