Coming Back from the Fire: New Iberia’s Gates of Prayer 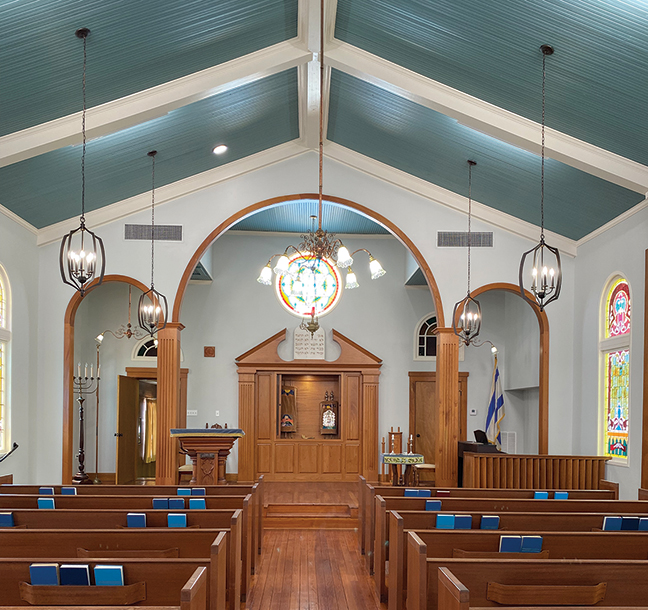 Members of Gates of Prayer in New Iberia weren’t expecting to spend the past year renovating their building, but mainly, they’re just happy it is still standing.

The renovations were made necessary after a fire broke out in the 1903 building the morning of April 29, 2020. As a thunderstorm rolled through, lightning struck the congregation’s roof and hit an electrical box in the attic, which congregation treasurer and past president Stephen Lahasky said “basically blew up” and ignited the attic.

Employees at Schwing’s Insurance across the street heard the boom and called the fire department upon seeing smoke. The fire department, located four blocks away, was on scene almost immediately, around 9:30 a.m.

There was some water damage, especially around the bimah and along the wall behind the bimah where an addition to the building was constructed in 1950.

Throughout the sanctuary, one can see differences. Instead of white Celotex acoustical tiles, the ceiling is now turquoise beadboard.

Naturally, the building had to be completely rewired, and the front doors where the firefighters came through had to be replaced.

The roof was redone in segments, one-fourth at a time. The cypress beams in the attic were inspected by engineers and deemed sound.

Lighting in the sanctuary was upgraded to LED lights, with the orange globe lights changed into new fixtures. A local artisan took three fixtures that date back to the building’s opening in 1903, took them apart, cleaned and rewired them and installed LED lights.

The long-leaf pine boards on the floor did not have to be replaced, but were refinished. Lahasky said they had been covered with carpeting for a time after a 1950s renovation.

Another item they were fortunate not to have to replace was the plexiglass coverings on the stained glass windows along the sides of the sanctuary. Originally installed 30 years ago for hurricane protection, the covers had recently been replaced and the trim repainted.

Overall, the project cost around $250,000, which was mostly covered by insurance — just the new lighting was not covered.

Being in the middle of a pandemic, where public gatherings were highly restricted, made it easier to do the renovations, as there were no services being held. They had their first service in May, and it was “just nice to be back in here.”

Lahasky said they expect to have an open house for the community this fall, so everyone can see the renovations, and they were hoping to have High Holy Day services in person.

For the small Jewish community of New Iberia, though, there is a sense of thanksgiving that the lightning strike occurred when it did, and not in the middle of the night when it would have been much less likely to be noticed.

“We were very lucky,” Lahasky said. “I don’t know what we would have done if it had burned to the ground.”