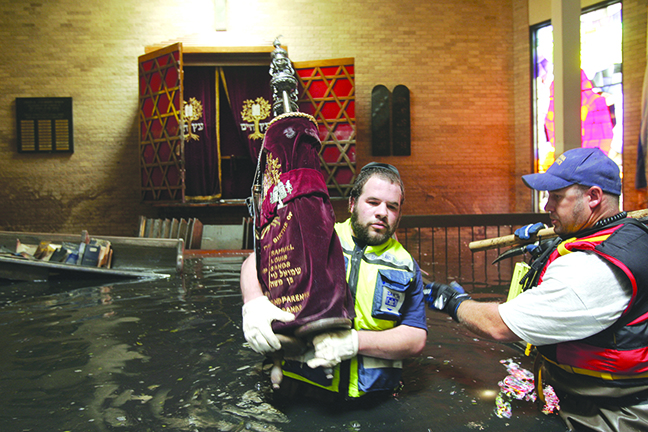 Rabbi Isaac Lieder from the Jewish Zaka volunteers carries a Torah scroll out of the flooded synagogue of Beit Israel in New Orleans, Louisiana, 13 September 2005. American volunteers with an Israeli charity on Tuesday rescued seven Torah scrolls from a New Orleans synagogue flooded by Hurricane Katrina.Many of them were wet and it was uncertain whether they could be salvaged, however. Four soldiers from a California unit brought Rabbi Isaac Leider and another volunteer to the gate of Beth Israel Synagogue by boat, then accompanied them inside through waist-high water to recuperate the seven boxed scrolls. AFP PHOTO/MENAHEM KAHANA.

Hoping there won’t be a repeat: Evacuating flooded Torahs from Beth Israel in New Orleans following Hurricane Katrina in 2005.

Jewish communities in Louisiana are bracing for Hurricane Ida, which is slated to make landfall on Sunday morning, exactly 16 years after the notorious Hurricane Katrina.

Arnie Fielkow, CEO of the Jewish Federation of Greater New Orleans, urged community members “to take all necessary precautions to protect yourself and your loved ones, whether it be in your own selected place of shelter or through evacuation.”

On Aug. 27, New Orleans Mayor LaToya Cantrell issued a mandatory evacuation for those outside the levee system, and advised most New Orleanians, especially those near Lake Pontchartrain, to leave as well. But by the evening, she said there wasn’t enough time for evacuations and urged sheltering in place.

Katrina, the 2005 history-changing landmark in the region, was a Category 3 storm at landfall, while estimates are that Ida could be Category 4. While initially, New Orleans seemed to make it through Katrina itself fairly well, the levee breaches during the storm caused the widespread devastation and extended exile for most of the New Orleans community.

In Mississippi, though, Katrina’s devastation was far more apparent and widespread, including the destruction of the Mississippi coast’s only synagogue, Beth Israel in Biloxi, which was rebuilt inland in Gulfport.

The latest forecast tracks show Ida’s landfall around 3 a.m. on Aug. 29 south of New Iberia, a town that has a small Jewish community and a synagogue that was recently restored following an April 2020 fire.

Just up the road is the small Lafayette Jewish community. To the east, between Lafayette and New Orleans, Baton Rouge has a community with two congregations that voted last weekend to merge.

In New Orleans, the Tulane Hillel was remaining open through Shabbat evening, then closing through Sunday at the earliest. With many students newly arrived on campus who have never experienced a hurricane, Hillel said to reach out to them for support.

Gates of Prayer in Metairie cancelled Shabbat morning services and will move Selichot to Sept. 4 at 8 p.m. Gates of Prayer has been hosting the summer joint Reform services in New Orleans during August, and the Aug. 28 service was to include an adult b’nai mitzvah ceremony, which will be rescheduled. The congregation’s Torahs have been wrapped in waterproof coverings and have been moved off-site to a fifth floor location.

Temple Sinai in New Orleans cancelled its Spiff Up Sinai day and High Holy Day family kickoff, scheduled for Aug. 29. The Selichot at Home service will be virtual on Aug. 28 at 8 p.m.

The Louisiana Jewish Coalition’s webinar for Aug. 29 has also been postponed due to the pending storm, and a new date will be announced.

The storm is expected to track over Natchez, then toward Tupelo and Nashville, dumping heavy rain in Mississippi, western Alabama and middle Tennessee.

Fielkow said “We all need to prepare for the worst, while hoping for a safe outcome.”