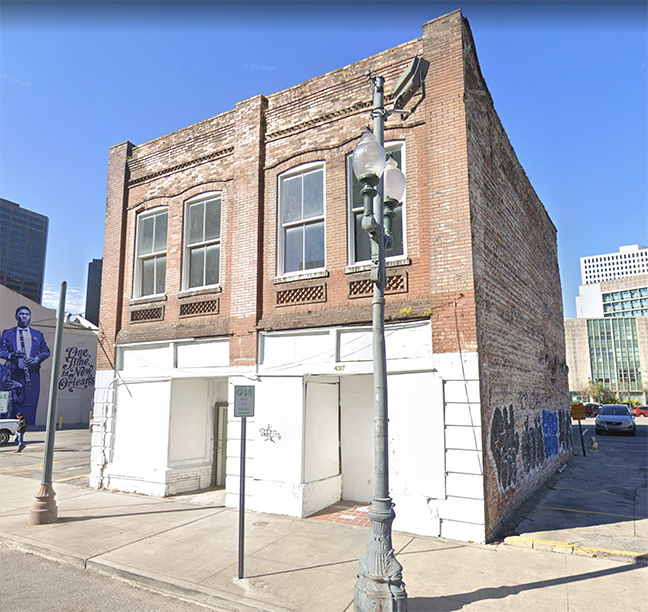 The former Karnofsky Shop, a landmark in the history of New Orleans jazz, was demolished by Hurricane Ida on Aug. 29.

The building at 427 South Rampart Street, which was vacant, was listed on the National Register of Historic Places in 2002. It opened in 1913, and the upstairs was an apartment for the Karnofskys, a family of Jewish immigrants from Lithuania.

The National Park Service says the first-floor tailor shop, with the residence above, was “a second home to the young Louis Armstrong,” the jazz legend who was befriended and employed as a child by the Karnofskys, and who helped him earn his first cornet.

When he was six, Louis and Tillie Karnofsky hired Armstrong, who lived with his mother in a rough, impoverished neighborhood, to work with their sons, Morris and Alex, on their junk and coal wagons. They blew tin horns to attract customers, and Armstrong soon wondered how he would sound with a real horn.

He saw a cornet in a pawn shop window for $5, and was determined to get it. Armstrong insisted that it not be a gift but that he would work for it, so the Karnofskys loaned him against future pay, and he got the cornet.

Morris knew Armstrong had talent and encouraged him to play. Dining with the family, Armstrong developed a taste for Jewish food, and learned a Russian lullaby from Tillie. Those early years gave Armstrong a strong affinity for the Jewish community.

Later, Morris Karnofsky opened Morris Music on that block, and the tailor shop eventually was transformed into the city’s first jazz record store. Armstrong would frequently visit the record store and play with fellow musicians. By 1939, the music store moved into larger spaces, finally settling at 168 South Rampart.

The Times-Picayune reported that there have been several failed efforts to revive the building, the most recent being a 2019 plan to possibly turn it into a nightclub.

According to Twitter posts, the destruction was between 5 and 7 p.m. on Aug. 29, just hours after the Category 4 storm made landfall southwest of New Orleans. The two-story building was flattened to a pile of bricks.