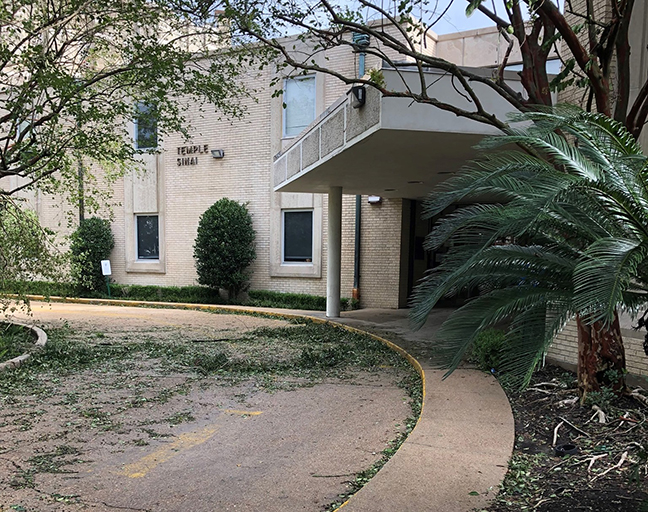 Outside Temple Sinai in New Orleans

Recovery from Hurricane Ida will be a long-term process for the Southeast Louisiana Jewish communities, but even though it will be nothing resembling the long-term displacement of Katrina, what the needs will be are not yet known.

At an online briefing by leadership in New Orleans and Baton Rouge on Aug. 31, convened by the Jewish Federation of Greater New Orleans and the Jewish Endowment Foundation of Louisiana, it was emphasized that much is still unknown, and the community is still figuring what the short-term emergency needs are for community members.

“This is a very different situation than what we faced 16 years ago after Katrina,” when flooding made most houses uninhabitable and it took months for many families to return, said Arnie Fielkow, CEO of the Federation.

“Obviously, we are very happy that the federal levees that were built since Katrina held,” he added.

The biggest question mark after Ida is when electricity will be flowing again in New Orleans, as the feeder transmission lines were knocked into the Mississippi River by Ida’s winds. Common estimates are that it will take three weeks for most of the area to regain power. Fielkow said there were rampant rumors and the true situation changes quickly, with some estimates that parts of the city will be back on in days. “We all need to take a deep breath and let this play out.”

Another issue in Jefferson Parish, many water lines were uprooted when trees fell, and there is a boil water advisory and low water pressure.

Fielkow said they are not prepared to develop the long-term plan “until we see where we are with the power situation.”

Ellen Sager, executive director of the Jewish Federation of Greater Baton Rouge, also said immediate needs had not yet been assessed in their community.

Thus far, there have been no reports of damage at the two Baton Rouge congregations.

The area’s Jewish institutions all reported minor or superficial damage. Anshe Sfard had two windows blown out in the sanctuary.

Leslie Fischman, executive director of the New Orleans Jewish Community Center, said the Uptown facility had some minor damage, including a fence down near the pool. When a staffer was checking on the property, she noted, there was a woman swimming in the pool without any clothes on.

Torah Academy had some damage in the playground, a fallen fence and some minor damage at the top of the building over the offices.

Jewish Community Day School is closed at least through Rosh Hashanah and “in a holding pattern, like everyone else,” Head of School Brad Philipson said. They are working to put together a pre-Rosh Hashanah online event for families.

Anshe Sfard and Beth Israel will not hold Rosh Hashanah services, due to the evacuations and that as traditional congregations, they do not livestream on Shabbat or holidays. Rabbi Josh Pernick of Beth Israel said they will try to organize a pre- or post-Rosh Hashanah online gathering. Shir Chadash in Metairie also is not anticipating holding services.

Other congregations were figuring out alternate plans. Gates of Prayer is exploring a small Rosh Hashanah service in the parking lot. Touro Synagogue is considering streaming a service, though they are not sure where it would originate from.

Temple Sinai is also hoping to hold at least one online service for members, “wherever they may be,” said Rabbi Daniel Sherman.

Rabbi Robert Loewy, emeritus at Gates of Prayer, said with so many New Orleanians once again evacuated to Houston, Congregation Emanu El in Houston will host a service for the community, led by Loewy and Cantorial Soloist Jordan Lawrence, Rosh Hashanah morning at 9:30 a.m.

Wendy Abroms of Chicago, a Tulane alumna who heads the Jewish Federations of North America emergency campaign, announced an initial grant of $50,000 that will go to Jewish Family Service in New Orleans to meet immediate needs in New Orleans, Baton Rouge and the Mississippi coast.

Six hours earlier, the national Federation system also set up a donation mailbox for Ida relief. Stephan Kline of JFNA said through those funds, “we will be able to be responsive to additional needs.”

Roselle Ungar, executive director of JFS, said their staff is scattered across the country but will be reaching out to clients, providing referrals and information, emergency humanitarian financial assistance and long-term assistance. They are also posting available resources on their website.

Fielkow emphasized that everyone who evacuated should keep receipts for food, lodging and other needs, in case they are eligible for reimbursement, and everyone should go ahead and register with FEMA for emergency status. Resource links are also on the Federation website.

Fielkow closed the meeting by reiterating the call from New Orleans for those who have evacuated to not try and return until the situation stabilizes, so emergency workers and power crews can have unfettered access to affected areas.