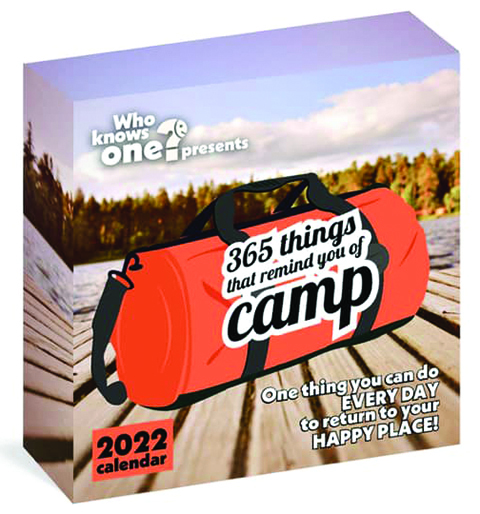 Putting camp on your calendar isn’t just for parents who are making plans to send their kids off next summer.

Micah Hart, host of the six degrees of separation game show Who Knows One, is developing a “365 Things That Remind You Of Summer Camp” 2022 calendar, and has a Kickstarter with a goal of $4,000 running through Sept. 23.

Hart has an extensive pool of knowledge to draw from, having spent his first 22 summers at the Henry S. Jacobs Camp in Utica, where his father, Macy Hart, was the longtime director.

The calendar “is based on the notion that camp people love to reminisce about camp,” he said. “Each day has a simple prompt that tells people to take an action that evokes camp, whether just scrolling through your mental rolodex of memories, or reaching out to your camp friends, or doing silly camp things like playing 2 truths and a lie or organizing a game of gaga.”

Sample activities include writing down a favorite camp meal, then asking a camp friend to guess what it is, or come up with five smells that remind you of camp.

For those too old to attend camp, “scrolling through the 17,000 photos the camp posts every day isn’t enough,” he said. “We need something more.”

Hart said it is important, given recent events, “to find ways to experience joy and connection,” and the calendar “is the perfect thing to help take you to your happy place for at least a few minutes every single day.”

Hart said he has been working on the calendar for a few years, and now feels like the time to bring it to life.

Backer levels begin at $5. The $25 level includes a copy of the calendar, the $50 level includes two calendars and recognition on the thank-you page. The $100 level includes a limited edition tie-dye T-shirt, and those giving $500 or more can co-host an episode of “Campfires and Color Wars,” his camp storytelling podcast.

Numerous camp alumni groups have taken part in Hart’s Who Knows One, “the Internet’s first and finest quarantine-inspired game show.” In it, teams use their social networks to expand to friend-of-a-friend Jewish geography in the ultimate pursuit of a mystery “Chosen One” in an online broadcast.