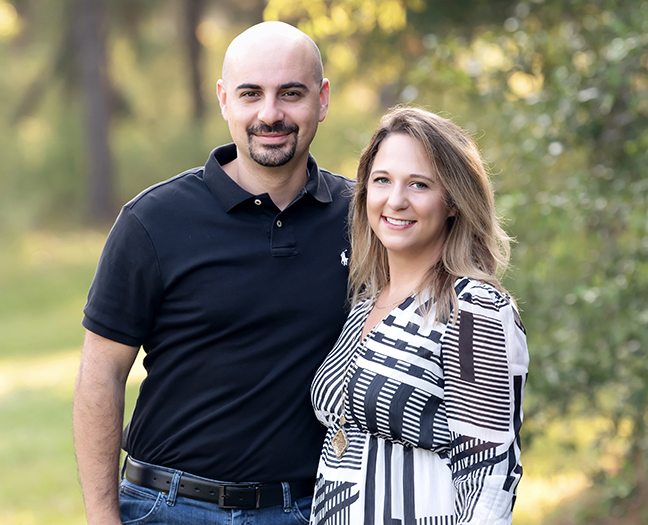 Based near Alabama’s Gulf Coast not far from Mobile, this dynamic husband and wife team applies their skill and savvy every day to advancing the well-being of Israel and the Jewish people.

Both now 38, their unique journey began when they met as 18-year-old students at the University of Alabama. They clicked and as their relationship deepened so did discussions about their religious differences, each committed to finding a path to make things work.

Cassie was a church-going south Alabama Christian. Ari was the son of an Israeli mother and an American father who had lost family in the Holocaust.

Nonetheless, they had a sense that this was a relationship that was meant to be.

The two of them worked through it all, finally getting married six years later, agreeing that they would maintain a Jewish household and raise their children Jewish, though Cassie would not convert.

Still, the traditions and beauty of Judaism and magnetic power of Israel, a place she and Ari lived for a time as their journey unfolded, would draw her deeper into Jewish life.

In a moving article that Cassie wrote in 2016 for the national Jewish website, Kveller, she recounted her odyssey and especially the conversion of her two children — a boy now nine and a girl six — to Judaism. In traditional Judaism, the two youngsters would not have been considered Jewish had they not converted since Judaism is seen as being passed through the mother.

She also explained in the article why at this point in her life she has chosen not to convert.

“I respect Judaism and its principles. I fell in love with its traditions and culture, but it’s not my faith. It’s not my path. I’ve had enough years of living in a Jewish home and attending synagogue and celebrating holidays to know, in my heart, it is not my own,” she wrote.

“I have found many more Christians than Jews have a difficult time understanding why I would raise my children as Jews. Likewise, I find many more Jews than Christians questioning why I don’t go ahead and just convert for the sake of my family,” she added.

“It’s what fits me. It’s not what fits everyone.”

Growing up Christian, it’s unlikely Cassie could have ever imagined being in the job she holds today. Nor could Ari ever have imagined himself working for an organization called Christians United for Israel.

In fact, he remembers the exact moment more than 10 years ago that the idea dawned on him. He was working for a communications firm and attended a speech by Pastor John Hagee, the founder of CUFI, which was a client of the firm.

“There must have been a thousand people in the auditorium. I saw a Christian preacher stand in front of a room full of Christians and tell them that if you worship the God of Abraham, Isaac and Jacob, and don’t know or care about the Jewish people down the street, that is antisemitism, sinful and damning to the soul,” Ari recalled.

“I was so moved. It was a genuine concern not just for the concept of Israel but for the people of Israel — the Children of Israel — the Jewish people. I did not know then that I would work for him, but the seed was planted.”

Yet as Ari looks back he thinks the seeds for what would become his CUFI career may have also been planted even earlier while growing up in Montgomery.

“I was about 12 years old and was spending the summer in New York with my father’s parents,” he explained. “My great grandfather had been murdered by the Nazis in Europe. My grandfather and grandmother had escaped. My grandfather was watching a soccer game on TV and I didn’t understand why he was rooting for this one country. So I asked him.”

His grandfather told him that the reason he was rooting for that country was, that at considerable risk, it refused to give up its Jews to Hitler as the Nazis came to power. “My grandfather told me to always stand with those who don’t give up the Jews.”

Ari remembered his grandfather’s words as Hagee was speaking. “So when the opportunity arose to work for CUFI, it was the most natural thing that I could think of.”

Aligning yourself with those who align with you is what drives Ari today, and has adrenalized him as he’s helped CUFI, through overseeing its media and policy initiatives, grow from 250,000 members to more than 10 million, making it the largest pro-Israel organization in the country,

Cassie has been the Mobile area’s Jewish Federation director since November 2020. A Jewish friend, knowing of Cassie’s background in fundraising and nonprofit management, recommended her for the job.

She loves her work, is passionate about it and is proud of the things her federation is doing to sustain and grow Jewish life in the Mobile area while supporting Israel.

“The Jewish community has embraced me wholeheartedly. I am a huge defender of the Jewish faith and Jewish community and I am a staunch Zionist. The values of the Federation — tzedakah, tikkun olam — are the values we practice in our family.”

Both Ari and Cassie work from home. He’s been doing it for nine years, ever since he joined CUFI. She’s at home right now because of the pandemic, which is particularly frustrating to her as a new Federation director because it thwarts her from meeting with people one on one, a key part of the job.

At times, their work connects the Morgensterns professionally.

“I sometimes turn to Ari for advice when something comes up at work. We had an antisemitic incident and he helped me write a statement. It’s not just that he’s my husband. My work affects his children and his life here as well.”

Ari and Cassie and their organizations each are part of a coalition that is working with the state of Alabama to enhance Holocaust education in the public schools, something Ari and CUFI believe would help combat antisemitism.

Their work — and shared commitment to Israel and the Jewish people — also always connects them personally, both to each other and to their children in whom they’ve already instilled strong Jewish identities.

Like other couples involved in Israel/Jewish work, their jobs do not stop at 5 p.m. Their professional lives spill over onto the dinner table where the conversation, with kids included, is often about Israel or the Jewish issue of the day.

This often can be gratifying; the whole family becomes immersed in the conversation— even the little ones who are part Israeli and will soon join their dad in becoming joint U.S.-Israeli citizens.

In fact, not too long ago, Cassie found herself in a discussion with her children about whether she should convert to Judaism. To her surprise they were opposed.

Until her six-year-old explained.

“She told me if Mommy converted then she couldn’t celebrate Christmas with my family anymore — and she wouldn’t get any presents!”