Ask Bubba Meyer: The same guy was a rabbi and an antisemitic priest in New Orleans? 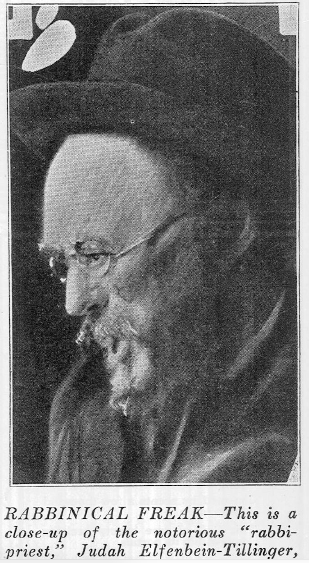 With the caption “Rabbinical Freak,” this photo of Elfenbein/Tillinger ran in The Sentinel. 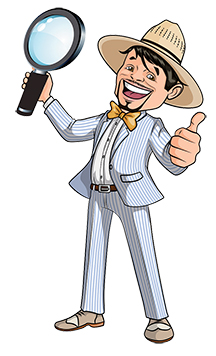 Q: Bubba, are reports that New Orleans once had a rabbi who also served as an antisemitic Greek Orthodox priest at the same time true?

A: Talk about your mixed messages — and the confusion over which day to deliver them!

The question is partially true. Rabbi Judah Elfenbein and Father Stanislaus Tillinger, the same person, were indeed in New Orleans at one point (and you think figuring out pronouns in 2021 is confusing?) but New Orleans was in no mood to claim him (them?) as a local. As Rabbi Mendel Silber, who was an editor of the local Jewish Ledger, wrote, “New Orleans has had the distinction, though unbeknown to the community, of harboring the most contemptible, the most despicable creature on God’s earth.”

So who was this diabolical duo, and how did he (okay, we’ll settle on singular) become so reviled?

The answers come from Gabriel Kanter-Webber, currently a rabbinical student at Leo Baeck College in London. He is working on a Master’s dissertation about defrocked rabbis, and has come up with a total of 17. Defrocking a rabbi is highly rare; more often, he or she is simply unsuited.

Among the cases, he said there was the Reform rabbi who had his wife killed so he could marry a congregant, and at the other end of the scandal spectrum, there was a 19th-century Hungarian rabbi who used hair products during Passover. Kanter-Webber is working on a long article that will eventually be published, and we look forward to it (though it won’t be in the Forward), as inquiring minds want to know.

In giving permission to reprint his research into Elfenbein-Tillinger here, he said this case “has to win the prize for being the most outlandish.” So why wouldn’t there be a New Orleans connection?

As Kanter-Webber related, Elfenbein was born in Galicia in the late 1800s and moved to Vienna, where he tried to become a rabbi. “He didn’t do well, and was either eased out of his seminary before graduating, or simply struggled to find rabbinic employment thereafter.” The impoverished would-be rabbi was befriended and supported by a Greek Orthodox prelate, and either converted to Christianity or just went through the motions of doing so. Not long after, Father Tillinger, as he was known, started writing articles in a Jesuit newspaper in Lviv, Ukraine, about blood libels — promoting the idea that Jews used Christian blood for various rituals, including to make matzah for Passover.

Tillinger even was a key prosecution witness in the well-known blood libel trial of Leopold Hilsner, a Jew who was framed for the supposed ritual murder of two women. The investigations and trials in 1899 and 1900 led to riots against Jews throughout Bohemia and Moravia. In 1901, Hilsner’s death sentence was commuted to life imprisonment, but in 1918 Emperor Charles I granted him a pardon.

In a 1923 JTA piece, Jewish journalist Gershon Bader said Tillinger’s articles “made a strong impression. The paper which was published by anti-Semites had an unusually wide circulation and the anti-Jewish effect was colossal. In the year 1908, he was made professor in the German university at Lemberg. There I saw him in the garb of a priest. Later I was informed that Tillinger had sought to return to the Jewish fold. Some were willing to ‘let bygones be bygones’ but I could not forget all of the pains to Jews that he had been the cause of.”

Though Tillinger was known as a priest, he also had a wife and children as Elfenbein, an illustration of the “almost comical extent of his double life,” Kanter-Webber commented.

In 1920, Elfenbein immigrated to New York and discovered that his Tillinger name was known and ill-regarded, so he grew a beard, resumed his identity as Elfenbein and wound up on pulpits in Youngstown, Ohio, Easton, Pa., and Brooklyn. He fled Youngstown when someone from “back home” recognized him.

In 1923, he was at the Jacob Schiff Center in the Bronx, when “casual gossip” at kosher cafes about his identity reached the Union of Orthodox Rabbis, who held a beit din, a religious court, on Feb. 19, 1923.

Elfenbein denied that he was Tillinger, but Rabbi Alter Pfeffer, who was from the same area as Elfenbein and was in Austria during the Hilsner trial, quickly identified him as Tillinger.

Afternoon prayers interrupted the proceedings, and according to a JTA account of the “most sensational” proceedings, Elfenbein was “seemingly moved by prayer” at the part of the service that included a plea for forgiveness from sin. He signed a confession and pledge, saying “I am not deserving of being a servant of the sacred profession. I pledge my self never to accept a religious position either as rabbi or teacher in a religious school on account of being unfitted by the deeds of my youth, which are widely and generally known.”

The Beit Din then issued a statement confirming that Elfenbein was also Tillinger and had been the notorious figure in the Hilsner trial.

So where does New Orleans fit into this story?

Just a couple months after the beit din, Elfenbein was in New Orleans trying to get a passport from the Brazilian consulate, saying he was being given a rabbinical position there. His attendance as a rabbi at the Presbyterian Church was brought to the attention of Silber, who was rabbi at Gates of Prayer, a Reform congregation that three years earlier had moved into a facility on Napoleon Avenue that had formerly been a Presbyterian church.

The Presbyterian minister found out Silber was asking around, and contacted him to confirm Tillinger’s identity — but insisted that he was innocent of the charges against him at the Beit Din.

A meeting was held with Silber, the minister and Elfenbein/Tillinger, where Tillinger denied ever forsaking Judaism or writing blood libels, or even knowing anything about the Hilsner case. Silber presented articles from the Austrian press, which Tillinger said were untrue, and then said the New York trial, in front of a panel of Orthodox rabbis, was a “frame-up” by atheists and Bolsheviks who wanted to ruin him because he was so devoted to Judaism.

Silber told him the Orthodox rabbis were “the very antithesis of Atheism and Bolshevism” and he would run an expose in the July 20 Jewish Ledger, where he called Tillinger “an individual whose flagrant rascality has been proven in public.” Tillinger then sued him for libel.

Silber, who was at Gates of Prayer through 1933 and also served congregations in New Iberia, Morgan City and Plaquemine, also did not mince words when talking about the “honorable and intelligent” Presbyterian minister, charging him with befriending the “bogus priest-rabbi” to help him “fetch Jewish souls into the Presbyterian fold.” He noted that the idea any Jew would be attracted to the church by Tillinger is the height of “criminal credulity.”

He added, “This in itself is the clearest proof of the unscrupulousness to which certain men and ministers are led by their missionary zeal; of the utter disregard for matters of conscience where missionary methods are concerned,” and said that rather than “protect our Presbyterian friends” from Tillinger, “let their own experience convince them of their folly.”

Kanter-Webber said it looked like the libel suit was soon dropped “as Tillinger’s lawyers lost faith in its possibilities of success.”

He did leave the country after the New Orleans encounter, heading to Czechoslovakia. Kanter-Webber found a 1928 reference to him in Austria, “begging for forgiveness and rehabilitation in order that he could once again resume working as a rabbi.” Anything after that is currently unknown.

Since Kanter-Webber is a rabbinical student, our hope for him is that he has a career that is far removed from the actions of those he is researching, and is never in any danger of becoming defrock-ee No. 18.

However, if he is taking nominees, we have a few to suggest…

Do you have a question that has been nagging at you? Let Bubba Meyer put your mind at ease… send your question to Southern Jewish Life and we will send it to where he is Festing In Place.