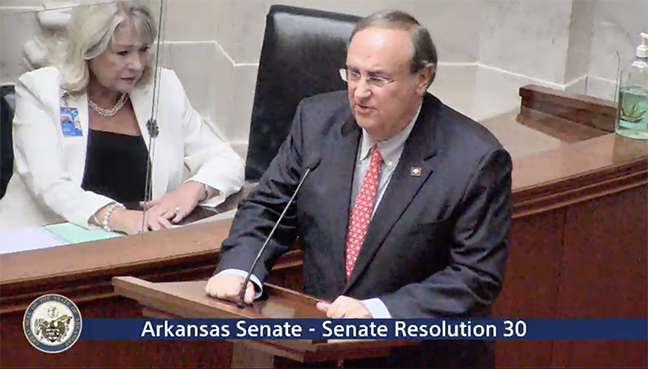 An Arkansas state senator is saying he was mis-heard by many people after remarks about Afghanistan seemed to include a slur.

On Sept. 30, the Arkansas Senate was discussing a resolution to condemn the Biden administration’s mishandling of the American withdrawal from Afghanistan earlier in the month.

Sen. Mark Johnson, in urging passage of the resolution, called the Taliban a “heinous regime,” then added “We like to go back 75 years and talk about how bad the Nazis were. Here in our own lifetime we have seen horrid things come out of that country.”

Many watching the debate heard his next sentence as “you don’t have to be a Jew-politician to know that Afghanistan is a place with a lot of problems.”

Aaron Ahlquist, Southern division policy director for the Anti-Defamation League, called that remark “perplexing” as well as “derogatory and deeply offensive,” and that Johnson should apologize for the “Jew politician” remark.

When asked by the Arkansas Times, Johnson responded that “What I said was ‘geopolitician.’ The context should make that clear.  I just recently heard that some misheard what I said… I’ll try to speak more clearly in the future.”

Ahlquist also focused on the Nazi comparison, saying that “while the Taliban’s history is characterized by horrific human rights violations… comparisons to the Holocaust, a singular event that led to the murder of six million Jews and millions of others, is wrong and inapt.”

The ADL has been pushing back on a wave of Holocaust analogies being made in public discourse, especially around Covid mandates.