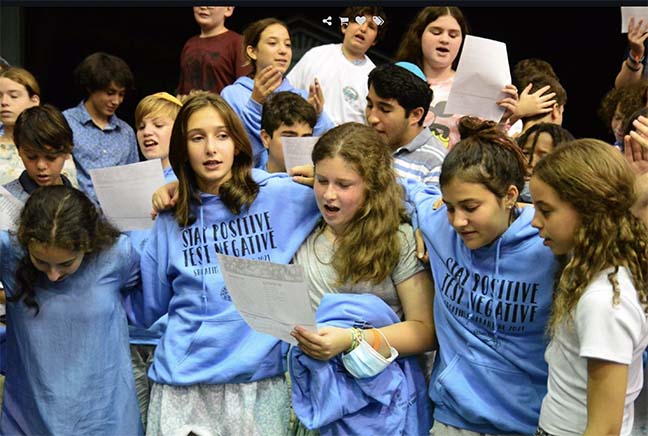 At Ramah Darom, the goal was “Stay Positive, Test Negative”

The Centers for Disease Control and Prevention published a paper on what it takes to have a successful summer camp experience in the age of Covid — and the study was entirely about the experiences of nine Ramah camps this summer.

Ramah is the summer camp arm of Conservative Judaism. Among the nine camps in the study was Ramah Darom in north Georgia, which draws most of its campers from the Southeast.

Most camps did not operate during 2020 because of the pandemic, Ramah included. A few camps, including Blue Star in North Carolina, did operate using multiple prevention strategies and had successful summers, while camps with “relaxed prevention strategies” that relied on one Covid test before arrival but did not engage in follow-up testing experienced outbreaks.

Helping the situation in 2021 was the availability of a vaccine, though by the time its use was approved for ages 12 to 16 in mid-May, it was too late to start the process for some first-session campers, as camp would start before the three-week interval for the second shot had passed, and camps were not set up to administer the vaccine.

Regardless of vaccine status, each camp had “multiple prevention strategies,” and over the course of the summer, a total of nine Covid cases were found. In none of those cases was there Covid transmission to others in the camp.

All Ramah camps asked campers to social distance from anyone outside their families for two weeks before camp, and at drop-off had to bring evidence of a negative Covid test from within the previous 72 hours.

Campers started the summer in pods involving their own bunks, while Covid testing continued regularly. Hand-washing was emphasized, and scheduling reworked to limit encounters between pods at meals and daily prayer sessions, and sick call was spread out by pod. Over 38,000 rapid tests were administered, with 21 positive results. Of those, 15 turned out to be false positives when PCR tests were given as a followup.

As the summer continued, pods were gradually combined, eventually to include entire age groups. Three camps were able to expand to one camp-wide pod.

Of the nine Covid cases, three were in vaccinated staffers and six were unvaccinated campers ages 8 to 14. One staffer case was detected during staff week, before campers arrived. The other two were from exposures during off-camp activities between sessions. While staffers leaving camp had distancing guidelines to follow, after the off-camp exposures, off-camp activities were cancelled.

One full-summer camper also was exposed at an off-camp activity between sessions. Two others were asymptomatic but identified in pre-arrival screening, while three others were identified by screening during the first eight days of camp, and only one was identified as symptomatic. All those testing positive either went home or were isolated according to local health department guidance, and all potentially exposed contacts were tested.

At Ramah Darom, the one positive test was in the age group called Shoafim, and toward the end of camp all members of that age group sported sweatshirts with the camp’s “Stay Positive, Test Negative” slogan and “Shoafim Quarantine 2021.”

“This project highlights the amazing team members who work at all of our camps and the unbelievable thought, planning, and effort put into making the summer of 2021 an unbelievable success,” said Mark Drexler, who headed the research team and is medical chair for Ramah Wisconsin.

Rabbi Mitchell Cohen, national director of the Ramah Commission, said the CDC has already contacted the Ramah team several times to provide guidance to boarding schools, based on Ramah’s successes this past summer.

Ramah credits the local teams for each camp, “colleagues and partners at other Jewish camping movements,” the Foundation for Jewish Camp, the Harold Grinspoon Foundation and the American Camp Association.

“We hope and pray for an end to this public health crisis and look forward to another wonderful and safe Ramah summer in 2022,” Cohen said.