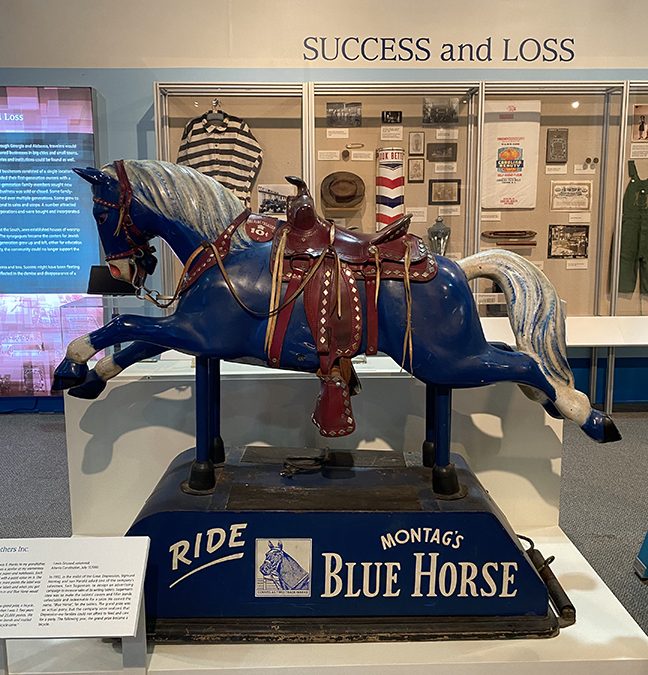 In 25 years, the William Breman Jewish Heritage Museum in Atlanta has collected a lot of stories about Southern Jewry, many of which involve more than a bit of chutzpah.

For its anniversary, the museum has assembled a collection of Georgia and Alabama Jewish artifacts and the stories behind them for the exhibit “History with Chutzpah: Remarkable Stories of the Southern Jewish Adventure, 1733-Present.”

The exhibit, which opened on Sept. 26, is curated by Jane Leavey, founding director of the museum, and Sandra Berman, who started building an archive for the Jewish Federation of Greater Atlanta before there was even the idea for the museum.

The exhibit was supposed to start with a gala anniversary celebration on Sept. 19, but that was postponed indefinitely because of the spike in the Delta variant of Covid. In addition to rescheduling the gala, the museum will plan numerous virtual and in-person events connected to the exhibit, which is expected to be up for three years.

To promote social distancing and crowd control, the museum is currently requiring advance tickets, including for members. The museum is open on Sundays from 11 a.m. to 4 p.m., with two time slots. The first slot is for arrival between 11 a.m. and 1 p.m., but visitors must depart by 1 p.m. The second slot is for 2 to 4 p.m., with similar guidelines. Museum staff will disinfect from 1 to 2 p.m.

The museum is also open by appointment Wednesdays to Fridays from noon to 4 p.m.

“Museums are important because without them, without archives, people can be forgotten,” Breman Executive Director Leslie Gordon said. “Jane and Sandy were insistent even before the founding of the Breman Museum that these stories be captured and treated with respect, for the insights and lessons that they would provide in the future. Now with ‘History with Chutzpah’ important chapters of our past come alive once again.”

The exhibit begins with a video presentation in what looks like a private library. As Leavey explained, many modern archives began as collections of curiosities gathered by wealthy individuals in their travels. A portal in the library leads into the main exhibit area. 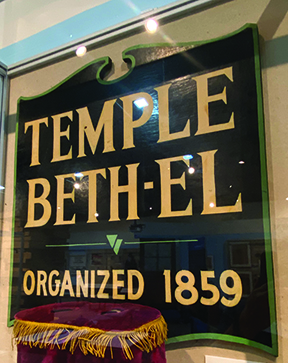 Sign from the defunct Temple Beth-El in Lanett, Ala. The congregation closed in 1977.

Leavey said that while most previous exhibits centered on a cohesive theme, the only request for this exhibit was that it highlight artifacts in the archives. The items eventually fell into six sections — Courage and Conformity, Hope and Survival, Success and Loss, Patriotism and Perseverance, Benevolence and Community, and Murder and Mayhem. “It’s not a linear exhibition, each section really stands on its own,” she said.

The Enfield rifle-musket used by Selma’s Jacob Rothschild when fighting for the Confederacy in Vicksburg is displayed. After the war, he was an early advocate for women’s suffrage. There is also documentation from Temple Israel in Macon, Ga., which declared in 1862 that members who were off fighting for the Confederacy were exempt from membership dues until the end of the war.

Another section tells about Elliott Levitas, who served five terms in Congress, returning to Georgia after being defeated in 1984. In 1999, he represented a tribal elder of the Blackfeet Nation in a class action lawsuit against the U.S. government for mismanaging Indian lands and funds, eventually procuring a $3.4 billion settlement.

Another section tells the story of Huntsville’s Margaret Anne Goldsmith and her life-long relationship with her childhood caretaker, Cora Barley. Reflecting on the complexities of race in Southern society, Goldsmith regarded her as family, but the exhibit includes “Cora’s plate,” on which she ate her meals, because Black help were generally not allowed to use the family’s china.

An Alabama example of chutzpah was Rabbi Benjamin Goldstein, who spoke out in defense of the Scottsboro Boys, nine Black young men falsely accused of raping two white women in 1931. His advocacy led to his departure from Montgomery’s Temple Beth Or. A poster in the exhibit advertises a “civic meeting” on the case, in Birmingham’s First Baptist Church on Graymont, with Goldstein as the event chair, and “white citizens are invited.” Another item shows the editorial in the Southern Israelite, decrying his removal from Beth Or.

Leavey said one story that stuck with her was that of Eva Judith Weisz Moray, who arrived in New York as a child after World War II. The exhibit has a bag she wore around her neck, with personal documents and a plea to help reunite her with her mother.

The Success and Loss section has a range of businesses, many of which succeeded and then disappeared. Items in the exhibit include the Rosenbush Victor Salve for Sores, made in Demopolis in 1900. A photo shows Felix Shevinsky peddling wares by wagon in Birmingham around 1910.

In downtown Montgomery, the Steiner-Lobman building is still a landmark. The exhibit details how the company was founded in Pine Apple in 1871, moving to Montgomery in 1891. Steiner-Lobman Dry Goods was sold to an investment group in 1969. The exhibit includes a pair of “Polly-Alls,” denim overalls that were popular among civil rights activists who had little time to do laundry and needed something that could stand up to the rigors of the struggle.

Also displayed is are 1950s product boxes from American Candy Company in Selma, and the philanthropic endeavors of Louis Pizitz, whose 13-store chain was headquartered in Birmingham.

Famous stories include the lynching of Leo Frank, and the story of Isidor Straus of Talbotton, Ga., whose wife, Ida, refused to stay on a lifeboat as the Titanic was sinking, preferring to go together with her husband. Straus and his brother were owners of R.H. Macy and Co. in New York. They were portrayed in the 1997 film “Titanic.”

Emma Mayer is profiled. A Natchez native, she married Samuel Ullman and moved to Birmingham, where she was instrumental in founding what would become Hillman Hospital, the first in the region to serve the indigent and Black patients.

Albert Steiner is also profiled. In 1919, the president of Atlanta Brewing and Ice Company died of cancer, which had already claimed his wife and son. He left $500,000 to establish the Steiner Cancer Clinic at Grady Hospital, which became a model for similar facilities nationally. Many have marveled at how such an important figure could be so little-known today, Leavey noted, saying that when they were researching his story, they spoke to a lot of people who worked at the clinic. “Nobody knew who he was.”

The exhibit also contains what may be the oldest bagel in history. At 16, Sam Greenblatt lied about his age when he went off to fight in the Spanish-American War in 1898. His mother sent him off with a supply of homemade bagels, and when he returned a year later, one bagel remained. That bagel has been passed down for six generations.

A baby bassinet in the exhibit was made by German POWs in 1944, who were being held at Camp Clinton in Mississippi. The bassinet was made from a wooden barrel for Raymond Harris, an Army Medical Corps surgeon whose son was born that year.

The exhibit also deals with battles against the Klan, and bombings of The Temple in Atlanta and B’nai Israel in Gadsden.

The idea for the museum and archive came from a 1983 exhibit organized by the Jewish Federation of Greater Atlanta, “Jews and Georgians: A Meeting of Cultures, 1733-1983.”

Leavey said they got items from all over the state, memorabilia from defunct congregations, businesses, family materials, photographs and ceremonial objects. Much of the material arrived in shopping bags.

The exhibit was at Emory University, and afterwards “we had to give everything back because we didn’t have a historical society or archive.”

A matching grant from the National Historic Records and Publications Commission, and a seed gift by Erwin Zaban led to the formation of the Joseph and Ida Pearle Cuba Community Archives and Genealogy Center, starting with a closet at the Federation, and focusing on Atlanta. Among the first collections were the Federation’s records, and materials from Rabbi Harry Epstein, who served Ahavath Achim for over half a century.

In the early 1990s, William Breman, president of Breman Steel, made a cornerstone gift toward the establishment of a Jewish museum. The Breman Jewish Heritage Museum opened in the Selig Center in time for the 1996 Summer Olympics in Atlanta.

The archive started collecting from the rest of Georgia, and “as the years went by we realized nobody was collecting in Alabama, so we started.”

In 2015, the Breman acquired the Savannah Jewish Archives, solidifying itself as the repository for Jewish history in the state.

As part of the exhibit, there is a reading room where guests can tell their own stories, “and we hope this exhibit will inspire people to tell us their stories and give us their stuff, to keep the archives going.”