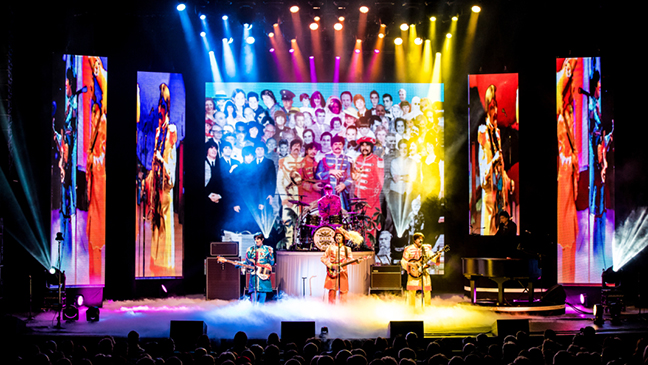 Beatles fans of several generations will “Come Together” to celebrate the Fab Four in Birmingham on Nov. 10 as “Rain – A Tribute to the Beatles presents The Best of Abbey Road Live” takes to the stage at the Birmingham-Jefferson Convention Complex Concert Hall.

“I have loved the Beatles ever since I saw them on The Ed Sullivan show (in 1964). Music and The Beatles have been a big part of my life for many years,” said Mark Lewis, 70, the founder and manager of “Rain – A Tribute to the Beatles.” “We’ve put a lot of love, time and effort into creating an experience that honors the world’s most iconic band and what they have meant to so many.”

Lewis grew up in Los Angeles. His mother played piano and his father sang, inspiring his love of music. Lewis started taking piano lessons at the age of five and became an accomplished pianist by the time he was 13.

“I used some of my Bar Mitzvah money to buy a keyboard,” said Lewis. “I knew I wanted to play in a band. This was at the time of the British Invasion and I was just so enthralled with the music.”

Flash forward to the 1970s and Lewis joined a band called Reign. The group was comprised of Beatles fans, performing a mix of original music and cover songs, usually including several Beatles songs.

They met the manager of one of the first Elvis impersonators at a Beatles festival Reign performed at. He was looking for a Beatles tribute act and lined up a gig for them to play a Beatles Night at a club in southern California.

“This was 1975 and the Beatles had just broken up a few years earlier,” said Lewis. “The reception from the audience was incredible! There was really an emotional connection and we felt like this was something we were meant to do.”

A few years later someone connected them with Dick Clark, who was producing a television movie called “The Birth of the Beatles.” The band changed its name to Rain, a reference to the 1966 Beatles single on the B-side of “Paperback Writer,” and was hired to perform the music for the movie.

“People raved about the soundtrack and it helped us to evolve our act,” said Lewis. Rain would tour nationally for many years with different members coming in and out of the group.

In 2005, Rain was mostly doing concerts at casinos. Their management team met with producer Jeff Parry about developing a Broadway-style production in the manner of 1977’s “Beatlemania.”

“Rain” ran for more than 300 shows on Broadway starting in 2009, and would then embark on world tours.

“On previous tours, Rain has performed music from different eras and albums of the Beatles,” said Lewis. “We continue to enhance the production and come up with new directions to take it in.”

Lewis lives in Reno, Nev., and has been married for 34 years to his wife, Debbie. He stopped performing in the group Rain years ago, but he still plays piano every day. Both of his sons, Allen, 32, and Gregory, 27, are involved in music writing, producing, performing and study.

Both of his sons had Bar Mitzvahs. “Being Jewish is something I am very proud of. It’s a part of who I am and it has always been important in our lives,” said Lewis.