Effort launched to bring Ninja playgrounds to communities near Gaza 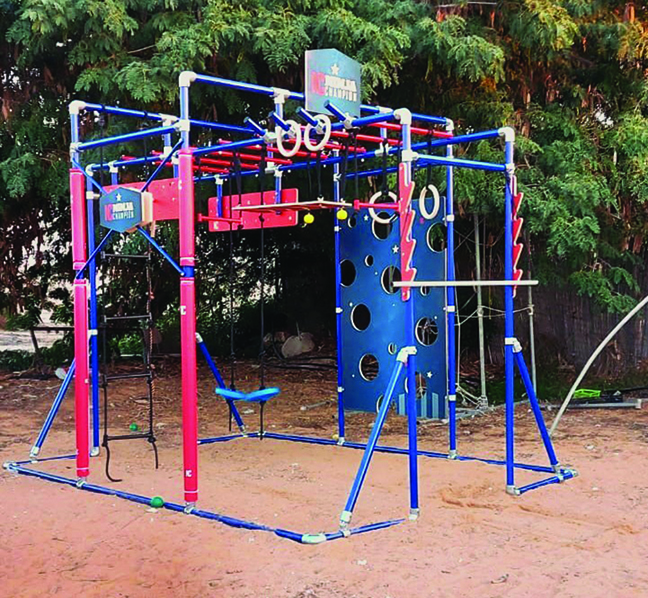 When conflict broke out yet again between Israel and Gaza, Birmingham’s Michael Duvdevani wanted to come up with something the community could do for Israel, “specifically for the kids living in the communities surrounding Gaza, in the moshavim and kibbutzim.”

In those areas, routinely bombarded by Hamas rockets fired randomly from Gaza, when a rocket is detected one has about 15 seconds to reach a shelter or safe space. Even in times without open conflict, there have been waves of balloon arsons, where incendiary devices are attached to balloons or kites and even made to look like children’s presents, to set fire to Israeli fields and communities.

Duvdevani, owner of Complete Feet, knows about the Gaza border communities, having grown up in one — Moshav Talmei Yosef, where his parents still live.

His brother also lives there with his three children, and “all my childhood friends live there with their families,” so doing something there “is close to my heart,” as “I know first-hand what their children have gone through.”

He is now spearheading an effort to raise funds and build a new type of playground in 50 border communities, “not like any regular playground,” but one which “will challenge the kids and really make a difference from a personal growth and believing in themselves… as they accomplish the challenges.”

Ninja Champion is a company established by two friends in Israel who wanted to develop a playground based on the “Ninja Warrior” competition television show. They now manufacture the playgrounds in Bat-Yam, near Tel Aviv.

The playgrounds are designed to always have something new to do — a new challenge or task, or a previous best time to beat. Among the 17 challenges are fire rings, monkey bars, Olympic rings, a Solomon ladder, fly board, bungee grip, iron finger board and hanging cones.

After the conflict in Gaza this past May, where Hamas launched over 4,000 rockets into Israel, Ninja Champion offered to place their largest model, the “Hurricane,” in three communities near Gaza, to help the children living under the threat of rocket attack, both physically and emotionally.

In a Facebook post, they asked for community nominations, and within 24 hours there were 43,000 views and 50 communities nominated. According to the company, parents “commented with emotional and painful messages that revealed their children’s suffering, and their feelings of helplessness in coping with the terrible effects of war on their children. Parents shared their stories of severe emotional distress, fears of leaving the house, using the toilet alone, of children sleeping in bed with their parents at night, and of their kids need for psychiatric drugs.”

They decided to try and install the “Hurricane” in all 50 communities. Duvdevani, who also saw the Facebook post, contacted the company and agreed with the plan, then set out to raise funds for the project.

The kids, he said, “suffer from PTSD symptoms” from having rockets fired at them all the time. Not only will these playgrounds, which are different from any they are used to, help build their confidence, they will “lower the stress and tension they experience on a daily basis.”

He noted that current teenagers in those areas have lived under this threat their entire lives.

Duvdevani said that because this is a grass-roots fundraiser, there is no overhead and everything raised goes directly into funding the playgrounds, supporting the communities and an Israeli start-up company.

The company installs the playground in a central location in each community.

“They’re really not that expensive,” Duvdevani said. The “Hurricane” generally sells for about $4,600, but the company is making the 50 playgrounds available, completely installed, for about $3,500 each, making the total project about $175,000.

Thus far, seven of the 50 playgrounds have been installed, and there has been “great feedback from the moshavim and kibbutzim where we have installed them,” Duvdevani said.

The situation there was not always as stressful. In 2005, Israel withdrew from Gaza completely, uprooting a couple of Israel communities and leaving behind the communities’ economic infrastructure for the Palestinians to use. Instead, the Palestinians demolished it.

The next year, Hamas forcibly took over Gaza and began hostilities toward Israel, including digging “terror tunnels” under the border with the idea of abducting Israelis. Faced with a regime in Gaza that is sworn to the elimination of Israel, Israel had to reinforce the border and limit the importation of materials that could be used to further hostilities. Egypt similarly closed its border with Gaza in an even more restrictive manner.

It is far different from when Duvdevani was growing up there. “The fence between us and Gaza was one that looked more like the fence in your backyard,” including the occasional holes, he said. “When I was young, we’d go to Gaza, to the markets, to the beach” and visit friends.

Today, Gaza is “the most secure border in the country… it’s unbelievable.”

Nevertheless, he is still in touch with Gazans who used to work at the moshav, calling them when there are hostilities to make sure they are safe. “Regardless of our national conflicts, we still have really good and really close interpersonal relations with individuals.”