Landmark Threefoot shines again in Meridian, as a new hotel 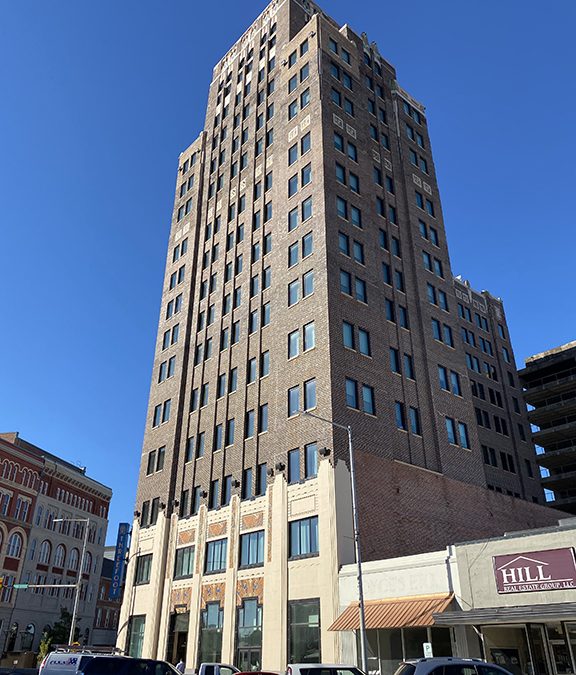 A Jewish landmark that is the tallest building in eastern Mississippi has finally reopened its doors after languishing for years.

The Threefoot Hotel, a Marriott Tribute Portfolio hotel, opened at the beginning of November after several years of renovations.

Ascent Hospitality Management of Georgia purchased the building “as is” in 2015 for $10,000 and committed to a renovation costing at least $14 million.

John Tampa of Ascent Hospitality said “We are proud to give the Threefoot new life as downtown Meridian’s cornerstone luxury hotel.” 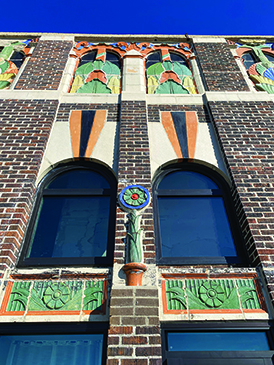 They sought to preserve the building’s Art Deco style and position it as a throwback to the “Golden Age of Travel” while offering modern amenities. “Through the preservation and restoration, we have prioritized creating a property that serves the community as well as her visitors,” Tampa said.

Jeremy Campbell, area director of sales, said a major emphasis of the project is telling the story of Meridian. The Jewish community plays a large role in that story, he said, and they are eager to tell it.

In the early 20th century, Meridian was the largest city in the state, with five rail lines and 44 daily trains.

Originally, the Threefoot was destined to be a Courtyard by Marriott, but Campbell said that earlier this year, Marriott changed the designation, making it easier to tell a local story. Tribute properties have much more flexibility to adapt to the historic nature of buildings, while Courtyards are more regimented and standardized.

“It allows us to tell our story, the story of the Threefoot building, the railroad history,” Campbell said.

The hotel has 110 regular rooms, 19 suites and two 14th-floor presidential suites with balconies. One meeting room is available.

The colorful exterior mosaic and terra cotta work were preserved in the renovation. The elevators feature the original etched brass doors, and the elevator lobby has its original marble wainscoting, flooring, mail chute and the original art deco light fixtures.

Even the sidewalk pavers are historic, original bricks from when the streets in the area were brick. They were excavated in recent road projects and preserved.

Campbell said they are working on using the mail chute to offer guests a chance to send a card down, where it will be postmarked by the hotel as a souvenir of the visit. 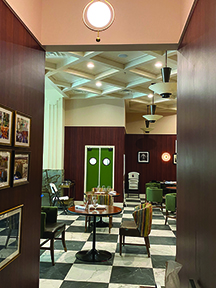 Two vestibules feature original 1929 Victorian era brass lanterns with frosted and cranberry glass accents. The directory from the building’s days housing offices is in the lobby and is being utilized as a fundraiser for the Threefoot Preservation Endowment for the Temple Theater. Former tenants, businesses and occupants can contribute at least $200 to the fund and have their name in the directory.

Tampa offered the premium space in the directory to the preservation group, which had just established its fund for the theater. The society announced on Oct. 7 that the first nomination for the directory is Samuel Abraham Threefoot.

A wall in 601 Local has a historical display about the building, the Threefoot family and their grocery business.

Located on the 11th floor roof, The Box Car offers small plates and a bar, with views of the city that most people in the city have never seen. Part of the nearby view is the Threefoot Brewing Company, which is unrelated to the hotel project.

For train enthusiasts, the Box Car offers a view of the entire railroad route through Meridian. The train heritage continues with numerous touches throughout the building, such as having the check-in desk behind a metalwork screen reminiscent of railroad ticket booths.

For history buffs, Meridian is also known as the Queen City. While many assume it is because it is where Kelly Mitchell, Queen of the Gypsies, is buried, the city had that designation before her funeral.

Mitchell, 47, died during childbirth in 1915 in west Alabama. About 20,000 Romani came to the funeral, and from one of the 14th floor suite balconies, one can see the entire story, from St. Paul’s Episcopal Church, where the funeral took place, to the entire procession route past the funeral home and up to Rose Hill Cemetery in the distance. 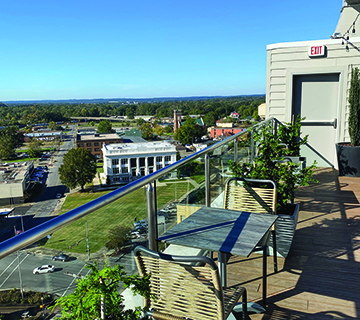 View from The Box Car

Campbell said the Threefoot is the final piece of a major downtown revitalization that has taken place over the last several years. A block away is the Riley Center, which was developed in the old Marks-Rothenberg Building, another site with Jewish history.

The Threefoot Building was immortalized by Ripley’s Believe It Or Not as “a 15-story building on a three foot lot,” playing off the name of the family that developed it.

In the 1920s, Sam Threefoot built what was Meridian’s only skyscraper, completing it in 1928 on the previous site of the Threefoot Brothers Wholesale Company. At the time, it was the tallest building in the state. Campbell said the building cost $750,000, which would be the equivalent of just over $12 million today.

In the late 1920s, the Jewish community of Meridian numbered about 575 and the downtown was filled with Jewish names on buildings.

The Great Depression depressed the building’s occupancy rate. The building became a drain on the family’s finances, and the family lost the building. 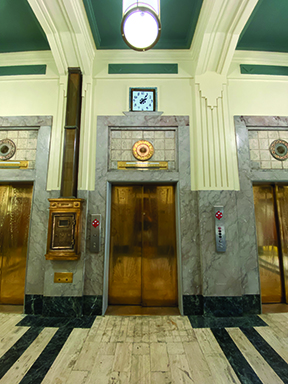 It continued on as an office building, but suburban development in the 1960s and 1970s led to downtown’s decline and it became vacant.

In 2013, a volunteer group called the Threefoot Preservation Society started meeting under the leadership of Amos Jones to try and stabilize the building in hopes it might attract a developer. At the time, there were “weeds, grass, debris of all kinds” on both sides of the building. Every month they would do basic restoration and preservation work.

Once renovations were underway for the hotel, Campbell said it was a challenge. “You have an old building that has sat vacant for 30 years.”

They retained as much of the historical details as possible and created “a showpiece.” He added, “this has been a long time coming, and to see it in its final stage is incredible.”