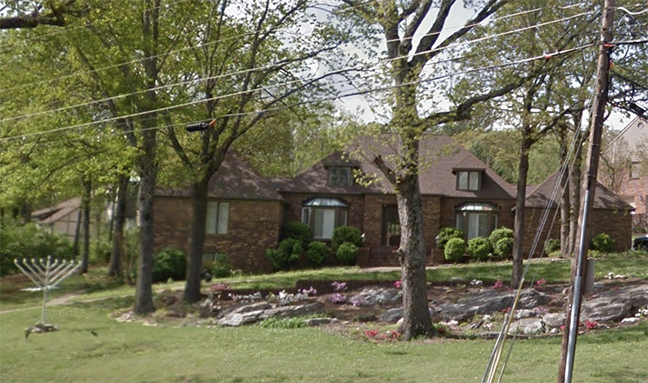 Two weeks before Chanukah, the nine-foot menorah in the front yard of Chabad in Huntsville was stolen.

Rabbi Moshe Cohen said he noticed on Nov. 15 that it was missing, and it was likely the previous night when it was taken. Footage from security cameras is being reviewed to see if there are any leads.

In April 2020, at the beginning of Passover, the Chabad was vandalized with antisemitic graffiti the night after Huntsville’s Etz Chayim Congregation was hit. No arrests were ever made in that case, and earlier this year an $18,000 reward for information was announced by Huntsville Police and the FBI, and then boosted to $20,000 by an anonymous donor.

In response to the theft, Cohen said they are going to “double down” and “turn an act of darkness into a spark of light.” A fundraising campaign has begun online to replace the menorah with a larger one, and to launch an effort to place large menorahs at several locations in north Alabama. He wants to “ensure that every Jewish home will celebrate Chanukah with a menorah on their home or participate in a Chanukah gathering.”

Despite the act of hate, Chabad will work harder to spread “the unequivocal message of freedom, positivity and endless light” as “we bring goodness and kindness to North Alabama this holiday.”

Cohen said “We need to use such instances to motivate us to do more and not hide away from our Judaism. We have to be proud of our Jewish identity and stand tall.”

Chabad’s annual community Grand Menorah Lighting at Bridge Street in Huntsville, outside the Apple Store, will be on Nov. 28 at 4:30 p.m. Mayor Tommy Battle will be honored. The event will include children’s crafts, street performers, latkes and doughnuts, and music. The outdoor event will be socially distanced.

There will also be a car menorah parade on Nov. 30, leaving Huntsville Middle School at 5 p.m. after setting up at 4:30 p.m. Every participating car will have a mounted menorah and a Chanukah goodie box with items for during the parade and after.

Community members can also have Cohen and his visiting brother, Shmully, over for a Chanukah house party and menorah lighting, where they will bring the latkes and doughnuts. Nov. 30 and Dec. 3 are not available.

Also, Huntsville’s Temple B’nai Sholom will have a Chanukah menorah lighting on Dec. 5, with Happi Pappi beignets and a silent auction.