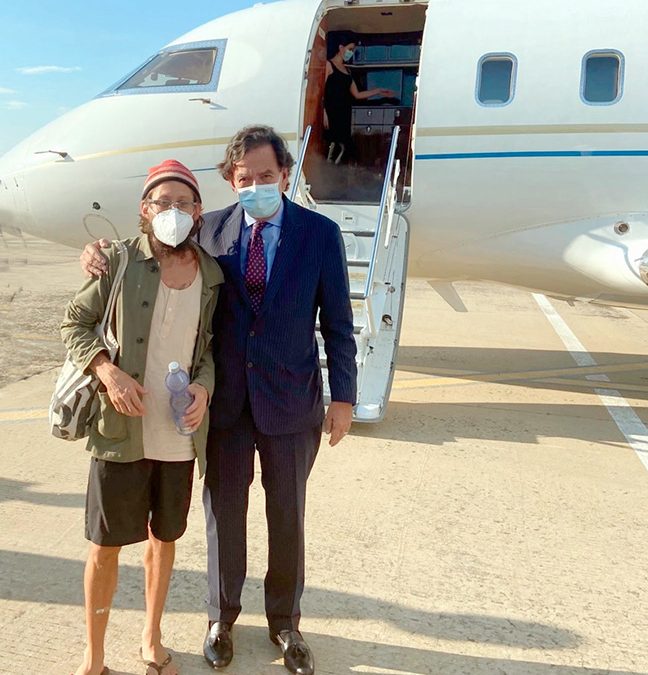 On Nov. 12, imprisoned journalist Danny Fenster was sentenced to 11 years of hard labor in Myanmar. Three days later, he was on his way back to the United States, accompanied by former New Mexico Governor Bill Richardson.

Though half a world away, the case was closely followed in Louisiana, as Fenster, a native of Detroit’s Jewish community, had worked for the Daily Iberian in New Iberia before moving to Myanmar in 2018.

In New Iberia, he became known for writing the stories of those whose voices had not been heard. That continued in his Myanmar work, as he was interested in the plight of the Rohingya that fled Myanmar during a military campaign in 2017.

After leaving New Iberia, Fenster went to Thailand and then Myanmar, where he became managing editor of Frontier Myanmar after working for Myanmar Now until July 2020. After a contested November 2020 election, there was a coup on Feb. 1 as the military ousted the ruling party. Dozens of journalists have since been detained.

On May 24, Fenster was heading to Detroit on a surprise visit to see his family for the first time in three years, when he was detained at Yangon International Airport by Myanmar officials.

Myanmar Now had been banned by the regime on March 8, and the offices were raided. However, Fenster had long since left that publication. According to Myanmar Now, Fenster was a copy editor, editing stories that had been translated from Burmese into English, but did not have a management role.

There was little information on what charges Fenster faced, and every two weeks there was a brief hearing that resulted in him being held for another two weeks.

“Free Fenster” signs and T-shirts proliferated throughout the Detroit area, and in late June a rally was held in New Iberia. Congressman Andy Levin worked for Fenster’s release, along with the U.S. State Department.

During the proceedings, it was revealed that the military incorrectly had him still working for Myanmar Now. Human rights groups called the sentence “a travesty of justice in a kangaroo court, and Fenster’s attorney said there was no point in appealing because the military controlled the courts.

Richardson, who visits countries where the U.S. has poor or nonexistent relations in efforts to free detained Americans, had visited Myanmar on Nov. 2 and is one of few foreign officials to have met with the leader of Myanmar’s military since the coup. He reportedly went in a humanitarian capacity and offered Covid assistance, which apparently helped toward Fenster’s release.

According to Myawaddy TV, which is owned by the Myanmar military, Fenster was given amnesty after requests by Richardson and two representatives from the Japan-Myanmar Friendship Association, “to maintain the friendship between the countries and to emphasize humanitarian grounds.”

Reports say the U.S. State Department opposed Richardson’s earlier visit and urged him not to mention Fenster, and was not aware of the return trip to retrieve Fenster. Human rights groups said his visit legitimized the military’s rule.

Levin told WWJ radio in Detroit that the Myanmar generals “were convinced that it wasn’t worth it to hang on to Danny,” and if something happened to him it would not be forgotten by the U.S.

After Fenster was given to Richardson, they flew to Qatar on the way back to the U.S. Fenster, who looked frail, said “I’m feeling alright physically, it’s just the same privations and things that come with any form of incarceration, you just go a little stir crazy.”

He added, “The longer it drags on, the more worried you are that it is just never going to end. That was the biggest concern, staying sane during that.”

He was also concerned about Covid, which was rampant in Insein Prison. At one point, his attorney said Fenster thought he might have Covid.

As Fenster made his way back to the country, U.S. Secretary of State Antony Blinken said “We are glad that Danny will soon be reunited with his family as we continue to call for the release of others who remain unjustly imprisoned in Burma.”

In a statement issued just after Fenster’s release was announced, his family said “We cannot wait to hold him in our arms… We are tremendously grateful to all the people who have helped secure his release, especially Ambassador Richardson, as well as our friends and the public who have expressed their support and stood by our sides as we endured these long and difficult months.”

His parents and brother met him in New York, which Fenster said was a “long time coming, a moment I had been imagining so intensely for so long.”

Levin said that when Fenster “cleared Burmese airspace” it “was probably the happiest moment of my time in Congress.” At the Committee to Protect Journalists and Richardson Center press conference after Fenster’s arrival in New York, Levin thanked the U.S. government, along with Singapore, China, Qatar and Israel for assisting in ways that will mostly never be known.

At the press conference, Fenster referenced other journalists, teachers and doctors who are imprisoned for no reason in Myanmar. “Let’s keep focused on what the actual story is here,” as there are reports that 120 local journalists are still detained there.

Rebecca Aguilar, president of the Society of Professional Journalists, said SPJ was “thankful” for Fenster’s release, and “we hope the message to the world is that no journalists should be put behind bars for seeking the truth.”

While Fenster had little knowledge of what was going on outside of prison, he had an idea that there were efforts on his behalf. He said it was “pretty bizarre” when someone quickly showed him an image on a phone of his family on CNN wearing T-shirts with his face on them.

He spent the flight time home looking at the news coverage about him from various places where he had lived. “It’s just incredible. I just have so much gratitude for everything everyone has done.”

Back in Detroit, Fenster was named one of the honorees to light the menorah for the community-wide Menorah in the D event on Nov. 28.

“We are so honored to welcome home Danny and to have him as a dignitary to light the large Menorah Sunday evening at Campus Martius,” said Rabbi Kasriel Shemtov, vice president of Chabad Lubavitch of Michigan, in a press release.

In August, the National Press Club named him the 2021 Press Freedom Award recipient.