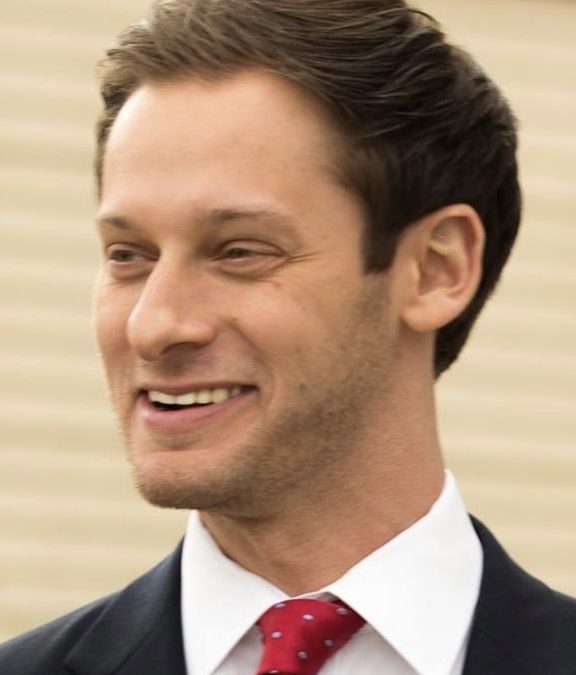 Being a Jewish Federation director is no easy thing these days. It’s a complicated job that requires a range of skills in addition to having the ability to stay calm and clear-headed in a sea of emotional pulls.

The Montgomery-based Jewish Federation of Central Alabama has hired a new director who not only understands all this, but by every indicator has the potential to succeed.

New director Phillip Ensler brings a diverse and powerful background to the job, one that reflects leadership and consensus-building, creativity and strategic thinking, and the ability to raise dollars, arguably the most important purpose of a Jewish Federation.

Raised in New York City, Ensler, a passionate and articulate 31-year-old, first came to Montgomery in 2012 after attending George Washington University, to work for Teach for America, a national program that places teachers in under-resourced schools.

As a high school social studies teacher in Montgomery, he made his mark both inside and outside the classroom and established innovative programs to open new doors for students.

Ensler’s cumulative impact on Montgomery, including a project he started during his two year stint for Teach for America, was spotlighted by the Montgomery Advertiser in 2019, earning him recognition as a “Community Hero.”

Wrote the Advertiser, “At an intersection of politics, education and legal defense, Ensler is an advocate for those in need. He breaks barriers for low income people with no access to a lawyer and pushes for criminal justice reform. He’s helped organize a community reconciliation project to honor lynching victims. And, for eight years, Ensler has brought hope to underprivileged students in Montgomery by introducing them to powerful people in the White House and across Washington, with similar stories.”

Living in Montgomery during his time with Teach for America also opened new doors for Ensler. He had a very positive experience interacting with both the Jewish and broader communities during his tenure.

“The Jewish community took me in. Families literally cared for me like a son and made me feel at home and safe and comfortable,” Ensler explained in a recent Zoom chat. “Just by being part of the Jewish community, I felt I was with Jewish people I had known for years.”

His time in Montgomery, and especially his absorption into the local Jewish community, affected him deeply, leading him to come back to Alabama after finishing New York’s Cardozo Law School.

“I missed the sense of being part of a community, not just a Jewish community but a larger civic community. In Montgomery my work was very much about individual people and it felt very intimate,” said Ensler. “I found myself coming back to Montgomery periodically to stay connected with people. I felt in my heart that I wanted to come back.”

Returning to Montgomery in 2017, he worked for Alabama Appleseed, a public policy organization, and then in 2020 joined the staff of Mayor Steven Reed as a policy advisor. “Ensler has been one of the key forces behind some of the most high-profile initiatives in Mayor Reed’s office,” the Montgomery Advertiser noted in its story on Ensler leaving the mayor’s staff to join the Jewish Federation.

During his time with the mayor, his connections to Montgomery’s Jewish community deepened to the point where Ensler, at a relatively young age, became president of the Jewish Federation, which is the Federation’s top volunteer role.

“I know it sounds mushy and sentimental, but it makes me so, so proud to be Jewish. We are a special people. I am honored to be Jewish.”

Though the Montgomery Jewish community may be small, it is important for the Alabama Jewish community to continue to have a strong Jewish presence in the state capital. This strengthen ties between Jews and state government leaders, which helps advance Jewish and pro-Israel interests.

Ensler’s Federation volunteer work elevated his visibility both within Montgomery’s Jewish community and throughout the state. It also provided a forum for him to assert his commitment to his Jewish identity, his discomfort with antisemitism and other forms of hate, and his dedication to Israel and world Jewry, cornerstones of the Jewish Federation movement.

Along with then-Executive Director Tzlil McDonald, who moved to New Orleans earlier this year, Ensler helped the Federation broaden its program offerings, sharpen its Israel advocacy, enhance its visibility in the fight against antisemitism and bigotry in general, and adopt strategies to embrace younger Jews.

As the search for McDonald’s successor began, Ensler joked to a friend that maybe he would apply. With that, the idea gained traction and the Federation wound up selecting Ensler.

“I didn’t mean it seriously, it really was one of those ‘aha’ moments. I am so passionate about this,” he explained.

“I was helping to write the job description and at that point it clicked for me. The more I talked to the board, the more I felt a sense of duty to pursue it myself.”

A major challenge is sustaining the Montgomery Jewish community and keeping it vibrant as its population shrinks. Ensler estimates that today there are about 500 Jews in Montgomery, a community that once was well over 1,500.

“Montgomery’s younger Jewish community members are not moving back here, and we don’t have enough other Jewish people moving here,” said Ensler.

His hope is that more can be done to reach out to younger Jews who come to Montgomery to work for the Southern Poverty Law Center, other advocacy groups, judges and law firms, state government and, as in his own case, Teach for America, to connect them with the Montgomery Jewish community.

Ensler also wants to capitalize on the ties that he’s developed with the broader Montgomery community. “From my previous work experience in the community, I believe I have the contacts that can bring people together and create coalitions.”

He wants, for example, to use his connections to the school system to advance Holocaust education and his ties to city government to develop programs that would attract even more young Jewish people to Montgomery.

As he begins his new job, he is learning that serving as executive director of a Jewish Federation is different from serving as a volunteer leader.

“As a volunteer, and particularly as Federation president, I could weigh in more with opinions. Now as executive director, a lot more falls on me to solicit input, balancing different ideas and perspectives about how to do certain things.”

Leading while including and providing direction while balancing input are two of the hardest parts of the job for any Federation director, as Ensler is learning.

“I can’t simply say ‘This is how I feel about it.’ There are different views on funding, for example, yet people need to feel included. This is a really important part of the job.”

Reflecting again on why he took the Federation job, this multi-talented community leader captured the essence of Federation work in a way that will serve him well: “As Jews, we have to look out for one another. Like any family, there are frustrations and disagreements. But ultimately we have to have one another’s back.”