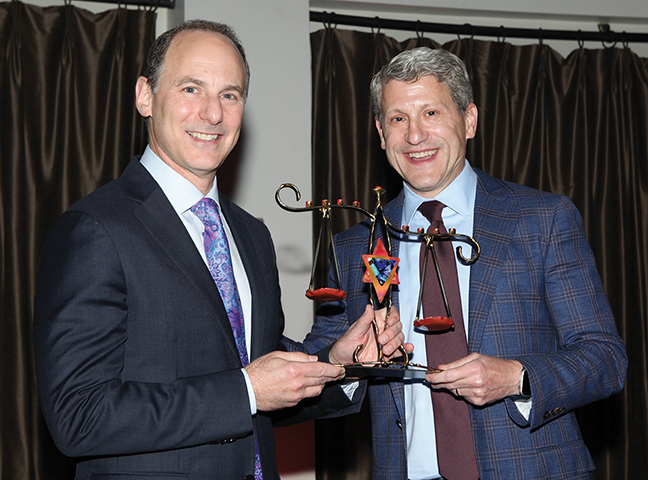 The Jewish Federation of Greater New Orleans unveiled its new strategic plan at its annual celebration on Dec. 8 at the Audubon Tea Room.

But that presentation and the installation of the Federation’s new officers wasn’t why Rabbi Deborah Silver of Shir Chadash began the evening with the recitation of “Shehecheyanu,” said at auspicious occasions.

“It is so long since we have sat in a room together,” she said. “It makes this moment a very special moment.”

In addition to the usual work of the Federation in a normal year, “the Federation has been nimble enough to pivot and face any challenges head-on,” including conducting the bulk of work in the virtual world the last two years.

At the City Park event where he became Federation president, Force said his emphasis would be on a strategic planning process for the Federation. Not only was that accomplished, the Federation launched two new Centers of Excellence for Jewish-Multicultural Affairs and Interfaith Families, but developed special programs to respond to Covid, and Hurricanes Laura and Ida.

Noting that the Federation’s emphasis is on implementing the strategic plan, incoming board chair Brian Katz said his first remarks as president “might be the easiest presentation I’ve ever had to make.”

Asked about his goals for the next two years, he said “I was handed a strategic plan and told, ‘Here are your goals.’ Since the community told me what my goals are, those are my goals.”

He hopes “the next two years in our community will be short on challenges” but are “as prosperous as the last two.”

Katz also promoted the upcoming Louisiana Trade and Community Mission to Israel and the United Arab Emirates in July, where there will be a traditional “explore Israel” track and four business tracks for state businesses, including medicine, biotech and health care; energy and sustainability; transportation, port and maritime; and cybersecurity and innovation. Registration is already open here.

Mark Wilf, board chair for the Jewish Federations of North America and owner of the Minnesota Vikings, made a video presentation for the event.

He recalled how, in the aftermath of Katrina 16 years ago, New Orleans was at the center of Jewish Federation awareness, and countless recovery volunteers “got to experience a community that was warm and welcoming despite what it was enduring.” The local leadership “set the bar for how Jewish Federations take care of everyone.”

He mentioned the partnership with Baton Rouge and Shreveport following Hurricane Laura in 2020, saying “I don’t have to convince this group of the power of the collective.”

That sense of community responsibility also manifested in the response to Covid, Wilf said.

Arnie Fielkow, CEO of the Federation, recalled being on the city council 15 years ago in the aftermath of Katrina, watching the range of programs Federation put in place during the recovery. Now, he said, the community is 20 percent larger than the pre-Katrina figure, approaching 12,000.

He hoped for “a sense of normalcy” for 2022, and noted that “this is the best community of any place in the U.S.” 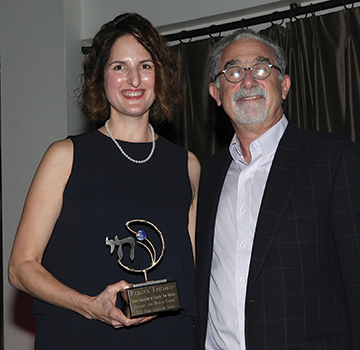 Bobby Garon presented the Herbert and Margot Garon Young Leadership Award to Rebecca Friedman. A New Orleans native, she moved to New York after graduating from Yale in 1998. She then worked for McKinsey and Company in Philadelphia, and Garon said she didn’t anticipate moving back to New Orleans, but she did in 2010, asking McKinsey to work remotely “long before long-distance work became the norm” due to Covid.

Now a freelance writer, she became part of the 2019 class of the Federation’s Katz-Phillips Leadership Development Program. She joined the Jewish Community Center’s board, where she was quickly “regarded as a shining star.”

“It’s been such a pleasure coming home to this community… and getting to know what Federation does,” Friedman said. “I hope to do a lot more.”

Bronston got her community start in the youth group at Gates of Prayer. Since coming back to New Orleans after graduating from the University of Missouri, “she devoted much of her time to the National Council of Jewish Women.”

In the 1990s she was in the Federation’s Lemann-Stern Leadership Program, predecessor to Katz-Phillips.

She has been on the Federation board, chaired Super Sunday and served on many committees, served on the boards of the JCC and Gates of Prayer, and the Jewish Children’s Regional Service gala committee. She was a founding member of the New Orleans Jewish Day School, “where her daughter Sally was in the first graduating class and the only eighth grade class.”

For over 30 years she was a writer at the Times-Picayune, sharing a Pulitzer in 2006 for coverage of Hurricane Katrina and its aftermath. Since 2012, she has worked in public relations for Tulane University, and is author of “Walking New Orleans,” which came out in an updated version last year.

Bronston said she was “shocked” to find out she was receiving the award. “Especially in this room, there are so many people who are equally deserving.” 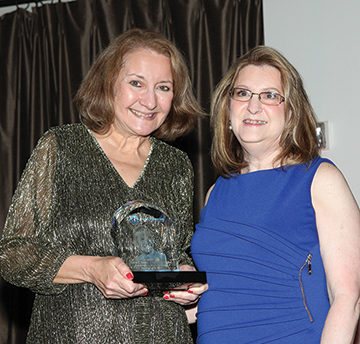 She added, “I love this J community and plan on being involved for many more years to come.”

In recognizing the Annual Campaign chairs, Joshua Force said that due to recent conditions, Mara Force and Joshua Rubenstein “actually chaired two consecutive campaigns,” something that hasn’t happened for a very long time.

Last year’s campaign raised $2.6 million from 1,222 households, with a 4 percent card-for-card increase. “Their passion and hard work made the 2021 campaign a real success.”

Joshua Force said the campaigns were successful “despite the fact that we were not able to meet with people on a face to face basis and discuss the campaign.”

Mara Force thanked “both of my Joshes,” and Rubenstein thanked Mara Force for “making this very easy for me.”

Nancy and Steve Timm will chair the 2022 Annual Campaign, with Melinda Mintz and Marc Behar succeeding them for 2023.

Fielkow noted that “at the end of the day, we are a fundraising organization,” and Federation donors provide “a safety net” for the community.

Joshua Force said the strategic plan being unveiled at the event “is not a plan to sit on a shelf.” The plan was recently presented to the Federation board and approved.

The plan was the culmination of almost two years of discussions, focus groups, surveys and interviews.

In the community, Force said the Federation plays several different roles: Convener, to bring groups in the community together; Funder of local agencies and overseas needs; Program Provider and Supporter of the Jewish People locally and around the world.

The plan has four main objectives that “all lead to different channels of impact on the Jewish community, its members, organizations, and agencies, as well as on JFGNO’s staff and team.” 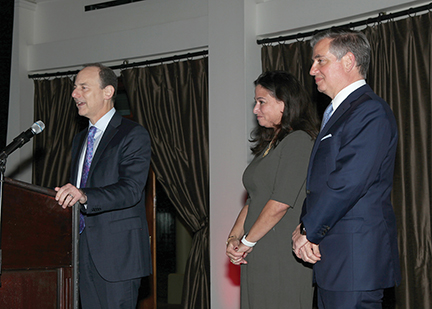 One priority is to welcome and connect all Jews “into an inclusive, meaningful environment,” whether first-time or long-time community members, and using the two new Centers as entry points. The goal is to have a space for everyone regardless of views or affiliation level.

“We need to ensure the community understands not only how we raise money, but how we spend money and the impact it has,” and ensure that funds are spent efficiently, Force said.

Collaboration and coordination in the local Jewish ecosystem involves awareness of the different organizations and institutions, and their roles in enhancing community, and to share resources and cut redundancy. For example, engaging younger adults should be done in partnership with the community groups that are already reaching them, to boost their efforts and provide additional resources to develop long-term active community members.

The fourth priority is to optimize the board, staff and leadership, improving communication and clarity of roles, and greater access to organizational information.

Each of the priorities comes with a set of recommendations on how to implement them, and how to measure success.

Force said “this is not going to happen overnight. It will take a while for it to be implemented fully.”

Katz announced that Michele Gelman and Shea Soll will chair the plan’s implementation, and said one piece of the fundraising component has been implemented with the hiring of Kassie Cosgrove as chief development officer.

The task force and committees “will be responsible for shaping the New Orleans Jewish community for the next five years or so,” Katz said. “Please voice your opinions.”