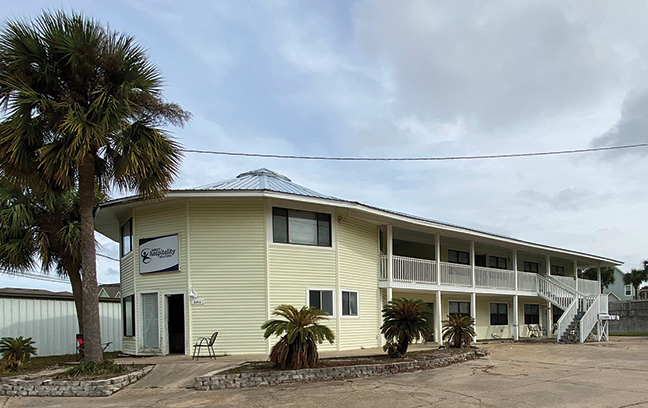 The Chabad Jewish Center in Panama City Beach has signed a contract on a new facility that will be renovated and become the new Chabad Center.

The new building is on Miracle Strip Loop, close to where they are currently renting a space.

Rabbi Mendel Havlin said their current space has one main room where they have “the shul, the dining hall, the workshop space, the classroom, the kids school, the meeting room and the party space,” often having to switch purposes in the middle of an event. Because of a lack of space, large events have to be held elsewhere.

A campaign is underway to raise $1.2 million for the purchase and renovation of the 5,000 square foot facility, with numerous dedication opportunities available. They hope to be in the new facility by Rosh Hashanah.

Havlin said that they had been looking for a new facility, but after Hurricane Michael, “purchasing a space in Panama City Beach has become almost impossible.” Then this opportunity came up “to purchase a building, in a central location, to serve the growing and vibrant Jewish Community in Panama City Beach.”

They plan to have a large synagogue and library, a dining hall “that can comfortably seat a big crowd,” a lounge space, a commercial kitchen and separate Passover kitchen, dedicated children’s classroom and a space for kosher groceries.

Havlin said the Jewish community includes “young couples that just moved recently to the area,” those stationed at Tyndall Air Force Base and the Navy Support Base, as well as veterans, families, singles, businessmen, retirees, and students at Gulf Coast State College and Florida State University Panama City.

The area is poised for growth, with many large new developments, such as Latitude Margaritaville Watersound, the “New Orleans inspired” Lagoon Manor, Breakfast Point, Moonraker and others.

“We are also serving many visitors, tourists and businessmen, or people with second homes at the beach area,” Havlin said.

In August 2020, there was a gathering of Chabad rabbis from the panhandle in Tallahassee, where they committed to helping the Havlins purchase a center.

Havlin said this project “would not be happening without the tremendous help of Rabbi Schneur Oirechman from the Center of the Chabad Lubavitch of the Panhandle” in Tallahassee, and Rabbi Moshe Kotlarsky, director of the international conference of Chabad-Lubavitch emissaries and the vice chairman of Merkos L’Inyonei Chinuch, the educational arm of the Chabad-Lubavitch movement.

Chabad has seen tremendous growth in the panhandle in recent years, under the direction of Oirechman.

The first Chabad center in the panhandle outside of Tallahassee was established in 2013 in Destin by Rabbi Shaya Tenenboim. In September 2018, Rabbi Mendel Danow arrived in Pensacola to establish Chabad there, just days before Hurricane Michael hit the area. At the start of 2019, the Havlins arrived in Panama City Beach.