Members of the Presbyterian Church USA’s Israel Palestine Mission Network pose in front of Israel’s security barrier during one of their trips to the Holy Land. The graffiti on the barrier readers “PC (USA) stands with Palestine.” Photo: Twitter.

From SJL and JNS reports

Jewish groups expressed outrage that, one day after the hostage situation at a synagogue in Texas, a leader in the Presbyterian Church USA delivered a Martin Luther King Day sermon castigating Israel and filled with antisemitic tropes, and that the denomination also published the sermon on its website.

On Jan. 16, Rev. Dr. J. Herbert Nelson II, Stated Clerk of the General Assembly for the Presbyterian Church USA, accused Israel of enslaving the Palestinians, and American Jews of not doing enough to stop it.

“The continued occupation in Palestine/Israel is 21st-century slavery and should be abolished immediately,” said Nelson. “Given the history of Jewish humble beginnings and persecution, there should be no ambiguity as to the ethical, moral and dehumanizing marginalization and enslavement of other human beings.

“The United States of America must be a major influencer of calling this injustice both immoral and intolerable,” he continued. “I would also hope that the Jewish community in the United States would influence the call to join the U.S. government in ending the immoral enslavement.”

“This Shabbat’s hostage crisis at Congregation Beth Israel in Colleyville, Texas, reminds us of how antisemitic tropes will often be the basis for violence against Jews. The normalization of antisemitic rhetoric has reached dangerous levels. We were heartened to see so many interfaith allies speak out and support the Jewish community during this difficult time. 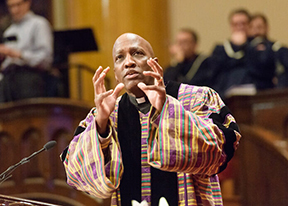 “Unfortunately, instead of issuing a statement of solidarity, the Presbyterian Church USA chose this weekend to issue a statement from Rev. Dr. J. Herbert Nelson, II, Stated Clerk of the General Assembly, implying that U.S. Jews are responsible for ‘enslavement’ of Palestinians, a dangerous antisemitic trope.

“To use the memory of Dr. Martin Luther King Jr. to make claims linking the Israeli-Palestinian conflict to enslavement and then call on the American Jewish community to use its ‘influence’ with the American government is not only unfair, but it is also dangerous. It is a long-standing antisemitic trope about Jews. In fact, the perception of ‘Jewish Power’ appears to have been a key part of the distorted motivation of the terrorist who held four people hostage less than 48 hours before Rev. Nelson’s hateful attack. Blaming American Jews for the actions of the Israeli government is a clear example of the ‘modern antisemitism’ defined in the internationally-accepted International Holocaust Remembrance Alliance (IHRA) definition of antisemitism.

“We also note with sadness this is hardly the first time the Presbyterian Church USA has shown this ugly side of itself. We pray for more from a self-professed God-fearing Church.”

The Jewish Federations of North America also reacted, calling the statement “unacceptable” and “distressing.” The organization said that “these kinds of distorted characterizations embolden extremists.”

Presbyterians for Middle East Peace issued a statement calling out Nelson for “reprehensible misrepresentations of our Jewish neighbors,” and noted that while Nelson found the time to make an anti-Israel sermon over King Weekend, four days have passed since the Texas incident and the Presbyterian Church USA has yet to issue a statement about it.

Pastor Todd Stavrakos said “we are deeply embarrassed” by the denomination’s lack of comment.

Turning to Nelson’s sermon about Israel and the Palestinians, Stavrakos said “Incredibly, his language seems to blame all Jews as the culprit, ignoring the many reasons why Americans support Israel. He dared to claim that Jews have forgotten their own history. This is working for unity?”

JFNA shared and praised the statement: “The reverend’s rhetoric is not representative of the close ties between the Jewish and Presbyterian communities and our joint efforts towards justice. Jewish Federations appreciate the words of Pastor Todd Stavrakos and echo his sentiment to pursue the unity that Dr. Martin Luther King Jr. sought, rather than deepen divisions.”

The Presbyterian Church USA has been the locus of numerous bruising debates over efforts by the church to boycott companies doing business with Israel, and has produced biased anti-Israel study materials and numerous highly-slanted anti-Israel resolutions in support of the Palestinian cause.

Dexter Van Zile, Christian Media Analyst for the Committee for Accuracy in Middle East Reporting, noted that after the 2018 attack at Tree of Life in Pittsburgh that left 11 Jews dead during Shabbat services, the Presbyterian Church USA “did little more than publish a blog post.”

In a letter to Nelson, the Anti-Defamation League called his sermon “nothing less than antisemitism.”

The letter states that he referred to Israel “as the epitome of evil:  an unethical, immoral, dehumanizing, marginalizing entity that has put another people into ‘enslavement.’  While this may be a powerful rhetorical flourish, it is a false equivalency that obfuscates rather than clarifies.”

The ADL noted the PC(USA) history of advocacy for the Palestinians, which “has at times used language and approaches that ADL and others in the Jewish community have viewed as unconstructive.”

His sermon, though, “goes well beyond unconstructive and can be clearly considered as prejudicial, irresponsibly tarring and endangering the Jewish people at a time when they are feeling intense vulnerability.   This action is particularly destructive coming from a faith leader, directed at another community,” and the ADL called on him to retract it and commit to constructive engagement with the Jewish community.

(Updated throughout on Jan. 20)