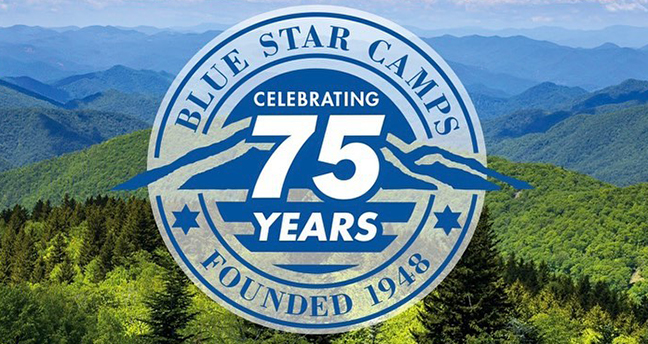 Two of the six camps that make up Camp Blue Star in Hendersonville, N.C. are called “Pioneer.” That pioneering spirit will be celebrated over Memorial Day weekend as Blue Star marks its 75th anniversary as the South’s first Jewish summer sleepaway camp.

The camp was founded by the Popkin brothers in 1948 and is now run by the third generation — Herman Popkin’s granddaughter, Lauren Herschthal, and her husband, Seth.

Seth Herschthal said the anniversary weekend will be “Catskills at Blue Star style” the weekend of May 27 to 30. The fully-programmed, catered event will be for alumni, families and friends, modeled after the Family and Friends weekend they do every five years, but with “extra flourishes, being the 75th.”

Plans are still being formulated, but two long-time former summer camp leaders Tali Azoolin and Evan Grabois are coming in from Israel and Miami to host the weekend.

There will be a full camp Shabbat experience, sunrise or sunset hikes on Pinnacle Mountain, child care provided, special programs for adults, a color war or Maccabiah competition, and visits by food trucks.

More information about the weekend will be announced soon.

After the anniversary celebration, it will be time to go right into staff training in anticipation of a “much more traditional, much more typical Blue Star summer” than during the past two summers with Covid in the background. First session will begin on June 12.

Herschthal said, “once campers are on the mountain, camp should feel like the rest of the world is far away.”

Blue Star was one of the few camps to hold an in-person camp during the summer of 2020, and did so successfully with numerous anti-Covid measures in place.

Last summer was much closer to a typical summer, but still with many Covid protocols in place. Herschthal noted that there was “more stress on the system” with the emotional and mental health of campers and staff who had not been “interacting in a regular, healthy developmental way” for over a year. “Kids of all ages were having to figure out how to be together again.”

This summer, Blue Star plans to reinstitute field trips to outdoor, nature-based activities. They are also expanding their on-site water ski and cable park systems, so those activities can be done at camp instead of off-site.

There will be new martial arts offerings and an expanded music program with multiple musical arts instructors.

A theater space is being retrofitted into a Be Creative space, with laser 3-dimensional printing, screen printing and more computer-based arts.

There will also be a new official pickleball court by the tennis courts.

They anticipate a full house this summer, and look forward to welcoming back large numbers of international staff. “We actually had more international counselors and activity specialists hired before Dec. 1 than in any previous summer,” Herschthal said.

With the hopes that the pandemic will no longer be much of a concern, “this should be a celebratory summer, and it just happens to coincide with the 75th,” Herschthal said.