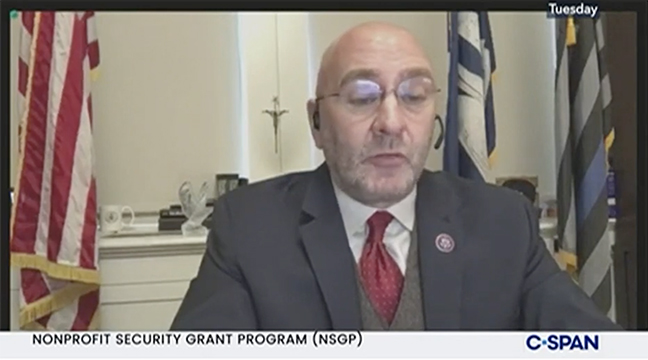 From JNS and staff reports

Rep. Clay Higgins of Louisiana attracted attention at a Feb. 8 hearing of the House Emergency Preparedness, Response and Recovery Subcommittee, and Intelligence and Counterterrorism Subcommittee, for comments that some say implied American Jews were citizens of Israel, and a question of the Jewish community’s attitudes toward police.

Testifying before the committee was Rabbi Charlie Cytron-Walker of Congregation Beth Israel in Colleyville, Texas, where he and three congregants were held hostage by a terrorist on Jan. 15. The hostage situation, which ended with the death of the suspect only — 44-year-old Malik Faisal Akram — was the impetus for the hearing.

The main issue the witnesses called for was an increase in funding of the grant, which currently stands at $180 million a year, to $360 million.

The grant allows nonprofits such as religious institutions of any religion, day schools, museums and other institutions that may be the target of an attack to apply for grants from the Federal Emergency Management Agency to help pay for hardening the facility and other security-related activities.

According to JFNA, only 45 percent out of more than 3,000 grant applicants that FEMA reviewed were able to be funded in 2021.

As a committee member, Higgins began his remarks by stating that “ensuring that our homeland is secure and our Jewish brothers and sisters are safe is vital to our nation’s success and our foreign relations.”

He called the grant program “a great example, providing both resources and training in case of a physical or pending threat,” and said that as a former police officer with 12 years of SWAT experience, “I am very familiar with the fact that every second counts.”

He noted that Colleyville “shouldn’t have happened in the first place” as the suspect should not have been permitted to travel to the U.S., given his history of radicalism, and said the U.S. needs to have a better handle on who enters the country.

“The Scripture says the nation that stands against Israel, stands against itself,” Higgins said. “May I say that very simple truth must permeate the homeland security policies and procedures and our determination to maintain law and order within our nation.”

He added, “And let me say – domestic and international – any act of aggression or violence toward Israel and its citizens must be handled swiftly.”

The Forward’s coverage indicated that it was “unclear what part of Scripture Higgins was referencing,” but Christian supporters of Israel routinely invoke Gen. 12:3, God’s promise to Abraham that “I will bless those that bless thee and curse those that curse thee,” which extends to the treatment of all of the Children of Israel, and that not just individuals but nations are judged by that standard.

Through a spokesperson, Higgins told Southern Jewish Life that “anyone who’s ever read the KJV Bible clearly understands that Israel and her people are forever anointed by God, and any nation that stands against Israel stands against itself… I condemn antisemitic attacks against America’s Jewish community just as I condemn antisemitic acts against our ally Israel. Both issues, though variant in nature, are deserving of Congress’ attention.”

At the hearing, Higgins appealed for cooperation across the aisle on policies that would allow “our friends, communities, churches, synagogues and places of worship (to) peaceably gather.”

Higgins told SJL that as a cop, “I was saying thank you” for “the Jewish community’s well-established support of and respect for the police.”

The Forward framed the exchange as requesting a pledge for “Jewish loyalty to police.”