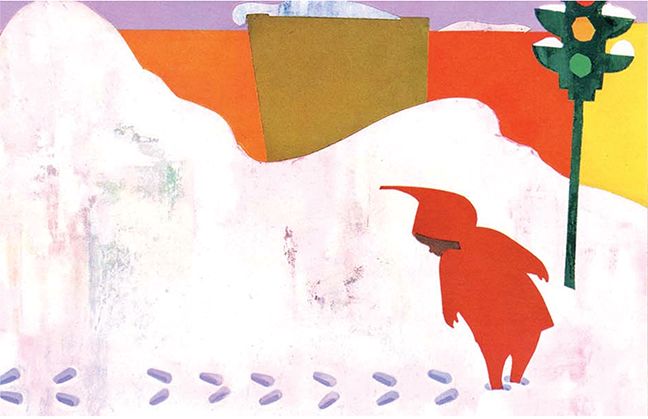 In 1962, Ezra Jack Keats authored a children’s book with a main character who “should have been there all along.”

Written in the midst of the Civil Rights movement, “The Snowy Day” became the first children’s picture book to feature a Black main character.

The Mississippi Arts + Entertainment Experience in downtown Meridian celebrates Keats and the diverse characters he brought to life in its newest exhibition, “Drawn inside the Margins: The Diverse World of Ezra Jack Keats.” The exhibition runs from Feb. 5 to April 16.

The exhibit features over 40 original artworks by Keats including collages, paintings, dummy books, and The Caldecott Medal he won for “The Snowy Day.”  The artwork was a part of a larger exhibition including over 80 original artworks organized by The Jewish Museum of New York entitled “The Snowy Day and the Art of Ezra Jack Keats,” which also was displayed at the Skirball Cultural Center in Los Angeles and the Contemporary Jewish Museum in San Francisco.

Stacey Wilson, Curator of Exhibitions at The MAX, explained that the New York exhibit focused on “the artwork through the lens of Keats’ life and career” while the Meridian exhibit focuses on Keats’ characters and stories, highlighting the diversity in ethnicity and class.

She wanted to bring the exhibit to Meridian because of how it showcases collage in addition to painting, “which exposes children to another genre of art and two possible career paths, collage art and children’s book illustrator.”

Also, the exhibit is about the importance of “The Snowy Day” being “the first book where African American children could see themselves in a book that didn’t degrade them.”

She also likes to have exhibits give the message “that anyone can change the world and make a difference, even if they are from a small town like Meridian.” Keats “produced something great out of creating what he believed.”

Considered the grandfather of diversity in children’s literature, Keats came from humble beginnings. The son of Polish Jewish immigrants, he came of age in Brooklyn, N.Y., during the Great Depression. He showed a talent for art at an early age, and one of his most prized possessions was a medal for drawing that was presented to him when he graduated from junior high school.

At Thomas Jefferson High School, he won a national student contest run by the Scholastic Publishing Company for his painting of a few hobos warming themselves around a fire. His father worried that he would not be able to make a decent living doing art, but Keats discovered, after his father died the day before his high school graduation, that he kept newspaper clippings of his art awards in his wallet.

Keats became an artist with the Works Progress Administration and did backgrounds for Captain Marvel. In 1943 he joined the Army and designed camouflage patterns. Due to antisemitism, he changed his name from Katz to Keats, and became a commercial artist.

He studied painting in Paris and did many works in the fine arts, then returned to New York to work as a commercial artist. An editor at Crowell Publishing saw one of his book covers in a store window in 1954 and brought him in to the world of children’s book illustrating, which he had not considered.

In 1960 he tried doing his own children’s book, “My Dog is Lost!” featuring a Spanish-speaking child from Puerto Rico who had just moved to New York. That started a pattern of centering his books on minority children and often doing bi-lingual books.

He said “The Snowy Day” turned his life around. “None of the manuscripts I’d been illustrating featured any black kids — except for token blacks in the background,” he explained. He was inspired by a series of photos he had clipped from a 1940 issue of Life, where a Black boy was about to get a blood test. “This was the child who would be the hero of my book.”

After the book won the Caldecott Medal, he went on to do about 20 more children’s books, including some that followed the main character from “The Snowy Day” through adolescence.

Keats died in 1983 after suffering a major heart attack, having written and illustrated 22 picture book classics, illustrating over 85 books authored by others.

The Library of Congress counts “The Snowy Day” as a book that has shaped America and is the most checked-out book in the 125 year history of the New York Public Library.

The Ezra Jack Keats Foundation supports public schools and libraries around the country. They also present the EJK Book Award, which is judged each year in New Orleans and presented in Hattiesburg each April as part of the Fay B. Kaigler Children’s Book Festival.

Keats’ original artwork is part of the Keats Archive at the de Grummond Children’s Literature Collection, one of the Special Collections at the University of Southern Mississippi. The collection in Hattiesburg also houses the works of Jewish authors H.A. and Margret Rey, creators of the “Curious George” series.

“The beauty of Keats’ illustrations lies not only in the symbolic message but also in his technique,” said Wilson. “I never realized the illustrations were collages, and to see them in person – they are amazing.”