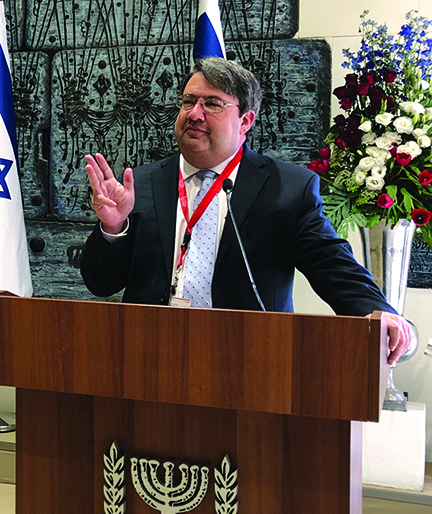 It seems that after a year or two of Jewish nerves being on end, culminating in the Colleyville, Tex., synagogue abduction, we have now entered the stupid season.

So many things have gone on lately that may not rise to the level of antisemitism, but are just simply stupid. In some circles, one might call them microaggressions.

The Amnesty International report on Israel is not just unbelievably stupid, it is blatantly antisemitic. Given that, it would be stupid for anyone who cares for Israel and the Jewish community to donate to Amnesty.

When talking stupid, one can count on something from Rep. Marjorie Taylor Greene from Georgia, who gave the term “Soup Nazi” a new significance by referring to the German Gazpacho instead of Gestapo. The reactions were served quite cold, and to her credit, she poked fun at herself too.

Whoopi Goldberg did herself no favors by insisting that the Holocaust wasn’t about race. That would come as a shock to people like, say, Hitler, who insisted the Aryans were the master race and the Jews were polluting it, a theme repeated by white supremacists in the U.S. during the civil rights era. True, you can’t pigeonhole Jews into a box of “race,” but the Holocaust certainly wasn’t just a “white on white” dispute. But when you are conditioned to see race as solely a black-white issue…

Then there’s McMinn County in Tennessee, which probably did more for Holocaust education in one day than most places have in years, by yanking Pulitzer Prize-winning graphic novel “Maus” from the curriculum, because of about eight naughty words and one image of nudity (remember, the characters are all animals). Since then, it has been difficult to find a copy of “Maus” anywhere as it rocketed to the top of the bestseller list.

Now, is eighth grade the best venue for that book? One can argue that, and author Art Spiegelman, in a forum convened by the Chattanooga Federation that drew 10,000 online, admitted he originally figured on college classes for examining the book. That’s a legitimate debate, but the McMinn effort came across as the old book-banning obsession of bean-counting certain naughty words rather than focusing on the subject matter, and looking for teaching a more palatable, family friendly Holocaust.

One board member justified the book’s removal by saying he met with a nearby rabbi who said he wouldn’t want that book in his synagogue. Interestingly, he refused to say which rabbi. The closest “nearby” synagogue to Athens is about 55 miles away. Now, there is a “messianic” congregation about 15 miles away, anyone want to bet…

Speaking of books, while McMinn was all over the news, a controversial pastor held a book burning in Mount Juliet, Tenn., focusing on “demonic” books like the “Harry Potter” series and “Twilight.” Now, not all book burnings lead to the Holocaust, but the timing of this was impeccably tone-deaf.

Then there are those who do express love for Israel and the Jewish people, but sometimes can’t quite find the best way to express that.

During a Congressional hearing on security, Rep. Clay Higgins of Louisiana did that, interchanging the terms Jews, Children of Israel and Israel, as one who reads his Bible might do, to make it sound like he was referring to American Jews as citizens of Israel — a major no-no.

He also asked the rabbis on the panel about their attitudes toward law enforcement, leading many to scratch their heads.

While the query about attitudes toward police may have been out of place, it isn’t far-fetched. Nationally, the Jewish community skews left, and over the last two years, a major position that is popular on the left is defunding police and describing police departments as hotbeds of racism. There are even some in the Jewish community who question having security at synagogues because it might send a non-welcoming signal to Jews of color.

Our tour now takes us to Mountain Brook, already on edge from the school system’s decision last summer to end its diversity training with the Anti-Defamation League because it is perceived to have become a more political, left-wing organization recently.

An ill-designed history lesson led to international publicity, which could have been nipped in the bud at the outset, had the school not gone after the student who publicized the lesson. The firestorm was three weeks after the incident, so there was plenty of time for a simple “oops, that was wrong.”

Most people close to the situation figured it was just a dumb way for the teacher to present a lesson on how symbols change, rather than there being any antisemitic intent.

As part of the debate, ADL CEO Jonathan Greenblatt weighed in.

In an opinion piece, “Nazi Salute? Blame the Jewish Student” Greenblatt says the teacher was teaching the Nazi saute.

Ignoring the context of the lesson, he called references to the Bellamy salute as “the company line” as the school went into “cleanup mode.”

The headline in the Times of Israel was the same as what Greenblatt had on his personal blog. Usually, writers don’t write their own headlines, so it is unclear who wrote the sub-head in Times of Israel, but it states that instead of crediting the Jewish student (who he mistakenly said was the only Jewish student at the school, but it is actually where the vast majority of Alabama Jewish high school students attend) with courage, “his school punished him and the local Jewish community didn’t defend him (emphasis ours).”

In the piece, he said that when the incident took place, “ADL or any other organization that might be able to help address the issue never received a call.”

So, the Birmingham Jewish Federation and the Jewish Community Relations Council, which have been working with the school system on this, are chopped liver?

The local community ignored it? With the Federation reporting over 350 calls and inquiries in the two days following?

But the ADL wasn’t contacted. Given the events of last summer, how exactly would that have helped?

The day the Mountain Brook story broke, several Alabama papers had an op-ed casting doubt on the ADL’s No Place for Hate curriculum, which has been in all Huntsville schools for years with no problems. The writer cited the ADL’s published definition of racism — marginalization or oppression of people of color to benefit the privilege of whites. In short, only whites can be racist.

The op-eds were immediately followed up by a piece by Greenblatt, stating the ADL recently revised the definition to remove naming any particular group, as upon re-reading it, the definition “didn’t even speak to my own family’s experience with the racism they experienced as Jews from the Middle East.”

There is a growing perception that the ADL is no longer middle of the road but leans left, that it is quick to go after those on the right but drags its feet regarding hate from the left or from Muslim extremists (they defended Amnesty International, albeit before last month’s report, and named a director of Jewish outreach who is openly hostile to Israel).

The ADL does great work, but this perception is making it more difficult for them to be effective, and the racism definition and other mis-steps aren’t helping.