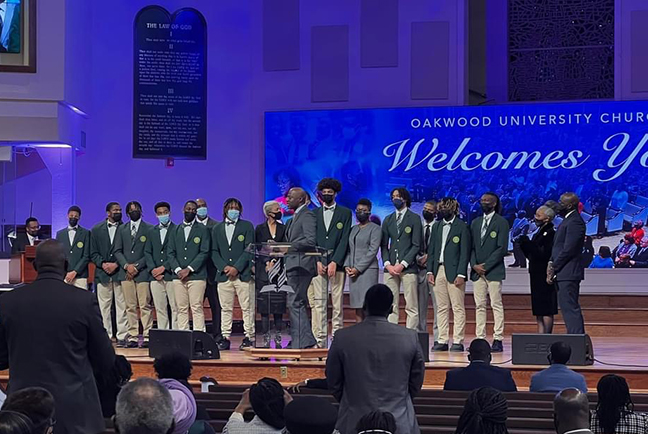 Perhaps instead of posting the Ten Commandments in Alabama schools, it should be posted in the Alabama High School Athletic Association office, with the commandment about the Sabbath highlighted?

The AHSAA denied a request by Oakwood Adventist, a Seventh-Day Adventist school in Huntsville making its first state high school basketball tournament appearance, to shift its playoff game by a couple of hours until after the Sabbath.

Oakwood was scheduled to face Faith Christian Academy of Anniston at 4:30 p.m. in the Class 1A tournament on Feb. 19 at Jacksonville State University. When Oakwood made the tournament and saw the schedule, they contacted the AHSAA to see about switching the game with the later game, a 7:30 p.m. tipoff between Decatur Heritage and Cornerstone School.

All three of the schools agreed to Oakwood’s plan to reschedule, but the AHSAA twice refused to make the adjustment. WAFF said the AHSAA told them “All games at each regional are expected to be played as scheduled. This is the AHSAA’s only statement.”

No tournament games are scheduled for Sunday, and the tournament brackets on the AHSAA website state that “all game days and times are subject to change.”

Seventh Day Adventists follow the Jewish tradition of observing the Sabbath and refraining from work from sundown on Friday to sundown on Saturday, but as a 24-hour observance without the early start marked by candlelighting or the late end based on three stars being visible in the sky. Oakwood said sunset was at 5:31 p.m. on Feb. 19, but the end of the Sabbath in Huntsville for the Jewish community was 6:11 p.m.

Because of the refusal to reschedule, the official result in the tournament was a 2-0 forfeit victory for Faith Christian. They will face Decatur Heritage on Feb. 22.

On their Facebook page, Oakwood posted that “OAA stands firm in their convictions and painfully but proudly forfeits their Saturday/Sabbath playoff game… and their hard earned shot at the Alabama state championship out of their firm Bible based belief in 7th day (Saturday) Sabbath observance.”

They noted that the forfeit was “especially hard” for their coach, Melvin Allen, who is in the Jacksonville State Hall of Fame who starred on a championship team there.

Faith Christian said “We hate that this happened, and wish Oakwood the best of luck next season.”

The Oakwood team still traveled to Jacksonville for the 7:30 p.m. game to show their support for the other teams that were willing to accommodate their beliefs.

Senior captain Raynon Andrews said he would not play on the Sabbath “no matter what, because it’s bigger than basketball.”