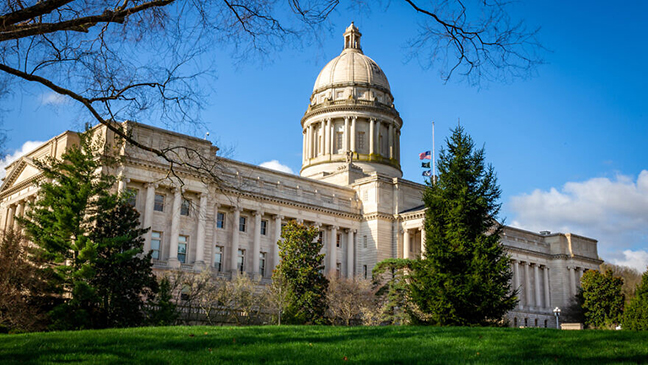 (JNS) — Two Kentucky lawmakers are apologizing after being called out for using an antisemitic trope during a committee meeting on Feb. 22.

According to the Lexington Herald- Leader, Republican State Rep. Walker Thomas and State Sen. Rick Girdler of the state’s Capital Projects and Bond Oversight Committee used the phrase “Jew them down” as they discussed “bargaining for a lower price on a lease.”

The paper said they were discussing the lease when “Thomas is heard faintly on a hot mic laughing after asking if the state could ‘Jew them down on the price.’

“The committee chairman then repeats Thomas’ words, shortly thereafter recognizing their impropriety,” the Herald-Leader reported. Girdler then said, “We’ve got a representative up here (asking) if you could Jew them down a little bit on the price” before saying “That ain’t the right word to use. ‘Drop them down,’ I guess.”

Rabbi Shlomo Litvin, chairman of the Kentucky Jewish Council, explained that the phrase “Jews them down, is an extremely offensive one, with a long and bloody history of use against the Jewish community. We were shocked to hear that term in a public forum.”

Litvin, who also serves as a Chabad emissary in Kentucky, met with the two officials on Feb. 23, using the meeting as an “educational opportunity,” during which he spoke about the history of the expression, the damage it has caused, and the history of Jews in Kentucky.

“They were both apologetic for any offense, and assured the rabbi that they meant no malice, and recommitted their support for the Jewish community,” the Jewish council said in a statement.

Melanie Maron Pell, chief field operations officer for the American Jewish Committee in Kentucky, said, “While belated apologies are welcome, any elected official willfully using the ‘Jew them down’ phrase is contributing to the spread of a classic antisemitic trope. Certainly, there are plentiful words and phrases in the English language to use in making a point in the state legislature without succumbing to traditional, derogatory references to Jews.”

“Elected officials must be among the first to recognize the harm derogatory terms can cause, especially when antisemitism is on the rise in the United States,” she said. “We look forward to working with Rep. Thomas and Sen. Girdler, as well as other members of the Kentucky State Legislature, on concerted efforts to combat antisemitism, and using AJC’s Translate Hate as a vital resource in this fight.”

The AJC’s Translate Hate program includes a glossary that shows the hidden hate behind various words and phrases.

A similar controversy erupted in 1986 when newly-elected Alabama Governor Guy Hunt used the phrase in a speech to Chilton County peach farmers. He initially expressed surprise at the controversy, as it was a common phrase that he did not consider had anything to do with actual Jews.