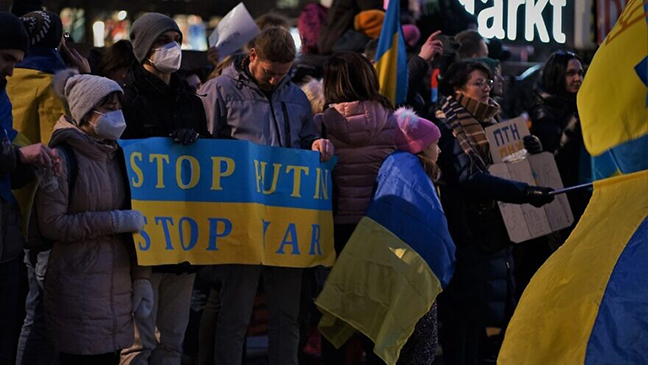 Leipzig, Germany, February 24th 2022: A solidarity demonstration for the Ukraine.

As war breaks out in Ukraine, the Jewish community worldwide is expressing concern for the over 200,000 Jews living in the country.

The Jewish Federations of North America have already identified $20 million in immediate and short term needs, and Federations across the region are embarking on campaigns to help.

The immediate needs include helping those who want to escape to Israel, securing Ukrainian communities and their institutions, maintaining critical welfare services, assisting those internally displaced, providing satellite phones to maintain communications and securing temporary housing for those in transit.

“Jewish Federations are hard at work, day after day, year after year, in times of crisis and calm, to build flourishing Jewish communities,” said Mark Wilf, Chair of the Board of Trustees of Jewish Federations of North America. “And when an emergency erupts, we are positioned to meet the challenges of Jewish people and communities around the world.”

Funds will be allocated through Jewish Federations’ core partners, The Jewish Agency for Israel, The Joint Distribution Committee and World ORT, and others who are on the ground in Ukraine.

The UJA-Federation of New York approved up to $3 million in emergency grants.

The Jewish Federation of Huntsville and North Alabama wired $10,000 to JFNA on Feb. 24, “emergency funds to help those evacuating to a safe location, and also for people staying behind,” and encouraged donors to add to the effort.

Danny Cohn, CEO of the Birmingham Jewish Federation, said that in addition to Ukraine, JFNA is also tracking “potential vulnerabilities” for Jews in Russia after Israel’s strong support of Ukraine.

The Unified Jewish Congregation of Baton Rouge distributed a poem for peace from the World Union of Progressive Judaism and a link to the WUPJ Ukraine Crisis Fund.

On March 9, the Jewish Federation of Greater New Orleans and the Jewish Community Relations Council had already scheduled “Let’s Talk About Ukraine,” with Columbia Jewish Federation Executive Director Ana Sazonov, and Edward Thomas Hayes, honorary consul for the Embassy of Ukraine to the U.S. The noon presentation will be over Zoom.

For Arnie Fielkow, CEO of the Federation in New Orleans, the situation is personal, as hos two daughters were adopted from Ukraine in 2007. “Our daughters and their sisters come from the city of Khmelnitzkiy in western Ukraine and, for the time being, the family is safe and well,” he said. “As the conflict expands, however, we are very concerned about their well-being.”

ORT is raising $100,000 for “immediate needs” to protect their five ORT schools and one ORT-affiliated school in Ukraine. Their schools serve over 4,500 students, with 437 teachers and staff members.

Chabad also has a relief fund, as they have 384 Chabad emissaries in Ukraine, providing services on the ground.

A Kyiv representative for the National Coalition Supporting Eurasian Jewry reported that Jews in Kharkov “were frightened with heavy rocket fire from the Russian side” and Grad truck-mounted rocket systems were being used against civilians.

In Odessa, the Jewish community reported that shells hit a Jewish cemetery, and community members were in bomb shelters or the basements of their apartments.

The NCSEJ also reported that a smaller community, Konotop, “is under attack. Russian tanks and troops fought with a small group of local military men who fought until they received an ultimatum from the Russian side: if you don’t stop fighting, we will hit civilian buildings and apartments. The city of Sumy was also under Russian attack. Russians invaded the city, but a local self defense group and army kicked them out of the city.”

Meanwhile, as the Russian invasion began, the Russian envoy to the United Nations was at the U.N. Security Council complaining of Israel’s alleged “settlement activity in the occupied Golan Heights, which directly contradicts the provisions of the 1949 Geneva Convention.”