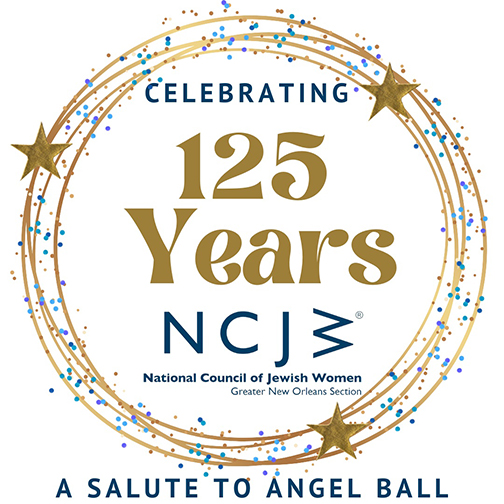 The National Council of Jewish Women’s Greater New Orleans Section is celebrating its 125th anniversary by reviving a piece of its history.

“Looking Back and Leading Forward with a Salute to Angel Ball” will be on April 9 at the Higgins Hotel. A patron’s party will begin at 6 p.m., with a signature drink. Dinner and dancing to the music of the Wise Guys will follow at 7 p.m.

In 1954, Section President Dorothy Betty Levy first conceived of the need to raise money through a Thrift Shop and a biennial special fundraising event to support community services.

That year, 100 women in the Bundle Brigade spent a day calling on 1,000 NCJW members at their homes to collect bundles of clothes for the Thrift Shop.

When the concept of a Charity Ball fundraiser was first presented to the board, the leadership hit some serious snags, as reported by Barbara Edison in her book “The Angel Ball – 20 years of History.” The argument was that “New Orleans will never go for a Charity Ball — we have too many Carnival Balls and none of our men like to dance, so no one will come to a ball.”

The first ‘Ball Committee’ worked long and hard on Ball policies in an attempt to address all of the fears and objections. A Men’s Advisory Committee was also formed to get their ideas, educate them on the valuable programs supported by NCJW and to interest them in attending the Ball.

“The men proved to be very helpful,” Edison said. “We had a men’s party with the men writing and producing a clever skit.”

The first Angel Ball was finally presented in 1961 and was chaired by NCJW Past President Phyllis Dennery, and Honorary Chairperson Mrs. Edgar Stern.

The name “Angel Ball” was used by the New York NCJW Section, based on the name that had been given to generous individuals who backed or promoted Broadway plays. Using this title, New Orleans hoped to define their social event and distinguish it from the Christian social aura of Comus Balls.

The first Ball was oversold. More than 1,500 people attended. If members contributed a certain amount of clothing to the Thrift Shop, their tickets would be free.

According to Edison, “it would have been easy to balance the budget on a free basis had not our members demanded food with dancing.” So, she successfully found underwriters for the event including New York national advertisers representing Benson and Hedges, Chivas Regal and Miss Sun Beam.

Later, donating to the Thrift Shop and becoming an Angel gave the members the right to purchase a pair of tickets for the Ball. This actually increased the popularity for the Ball as well as donations to the Shop.

According to the ‘Council’s’ earliest leaders the Angel Ball “provided a number of important benefits to the section including a united budget, a well-informed membership and more volunteers free to work in social action and community services.”

Tickets are available on the NCJW New Orleans website. Patron tickets start at $250. General tickets are $125, or $80 for ages 36 and under.