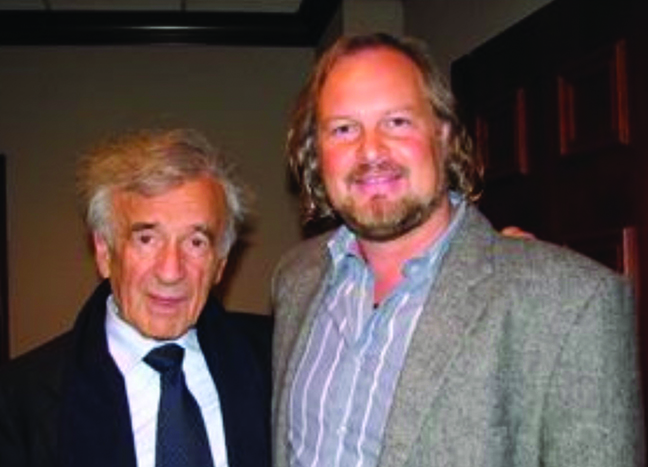 Greg Garrison and Elie Wiesel during Wiesel’s last visit to Birmingham in 2007.

When AL.com reporter Greg Garrison was growing up in rural Missouri in the 1970s, he never could have imagined how an unlikely friendship with an elderly Holocaust survivor in St. Louis would later influence his career.

Through their involvement in union activities, Garrison’s dad formed a relationship with the woman’s husband that led to deep ties between the two families.

Garrison knew this elderly Jewish woman had a number tattooed on her arm — this is the way the Nazi regime catalogued death camp inmates and identified them after they were murdered.

She kept it covered and never talked about her experiences, even when young Garrison would drive to St. Louis, after her husband died, to take her to Cardinals baseball games.

This friendship was very much on his mind as the longtime journalist reflected in a recent Zoom chat on his more than three decades of covering religion in Alabama, and especially Birmingham’s Jewish community.

Asked about his most memorable Jewish stories, he immediately pointed to covering the late Elie Wiesel’s visits to Birmingham, noting that he and the renowned Holocaust survivor-author-speaker became relatively good friends.

He also pointed to his coverage of and relationships with local Holocaust survivors as another highlight of his career.

Garrison never imagined himself becoming a religion writer. As a journalism major at the University of Missouri he covered football and basketball, aiming to be a sportswriter.

Since college sports are the South’s other religion, one could even say that unbeknownst to him, the young Missourian was priming himself to be a religion writer early on. Are there not denominations and frenzied congregants who pray that God will favor their team?

However, after graduating Missouri in 1981, Garrison landed a job at the Anniston Star as a business writer.

One day the managing editor asked him to cover a religion story, knowing that in high school Garrison won a national journalism award (and a Smith Corona electric typewriter) from the religion magazine “Guideposts” for an inspirational story he had written about his family bouncing back after a fire destroyed their home.

“The next thing I knew was that the Anniston paper wanted to have a full-time religion writer. So, thinking it would be interesting, I raised my hand.”

Garrison would stay at the Anniston Star for 15 months. During that time he won a national journalism award from the Religion Newswriters Association.

“I interviewed a Grand Dragon of the Ku Klux Klan who was a Baptist pastor, and also interviewed the KKK chaplain. In our conversations they talked about their belief in the principles of the KKK and how there wasn’t any conflict between those beliefs and their Christian faith.”

That story and the national award led to Garrison becoming the religion writer at the Birmingham News, an important position given Alabama’s fervent religiosity. Thirty-five years later Garrison is still in that role.

He’s often asked about his own religious beliefs.

“I basically have no religious loyalties and no formal affiliation. I honestly feel like I’m kind of an honorary member of whatever religious congregation I visit. I know the rituals and procedures of every religious community I cover.”

It’s hard for a reporter to stay fresh year after year, let alone decade after decade, but that’s what Garrison has managed to do — especially when it comes to writing about Birmingham’s Jewish community.

Jewish leaders who have dealt with Garrison tend to give him high marks. They see him as a serious reporter; informed, thoughtful and accessible, and someone who has no agenda other than telling the stories of Birmingham’s diverse religious communities.

Reflecting on his coverage of the Jewish community, Garrison noted with gratitude that the late Rabbi Milton Grafman was a friend and mentor to him. He also named others who’ve guided him over the years, including Southern Jewish Life’s editor and publisher Larry Brook. “I have always had a great relationship with the Jewish community.”

One of the most significant developments he’s seen in the Jewish community during his tenure has been the emergence and growth of Chabad.

Garrison also has a different take on antisemitism. He questions whether hatred of Jews is actually rising as dramatically as many national Jewish organizations have depicted.

“I think antisemitism always has been there. It’s just that now, due in part to social media, it attracts much more attention. So it’s hard to tell if it’s actually rising.”

Looking back on the stories he’s written over the years on Jewish events, issues and trends, his one lament is that he never got to write the most memorable Jewish story he came across.

Years ago he was introduced to an older Jewish couple who had immigrated to the U.S. and lived In Birmingham. They told him that they were the last Jewish couple allowed to marry in Germany as the Nazis ascended to power and began stripping Jews of their rights.

They told Garrison their story but did not want him to write about it because they didn’t want the publicity, especially if it were to become a national story.

“I would have loved to have written that story. It has stayed in my mind until this day.”